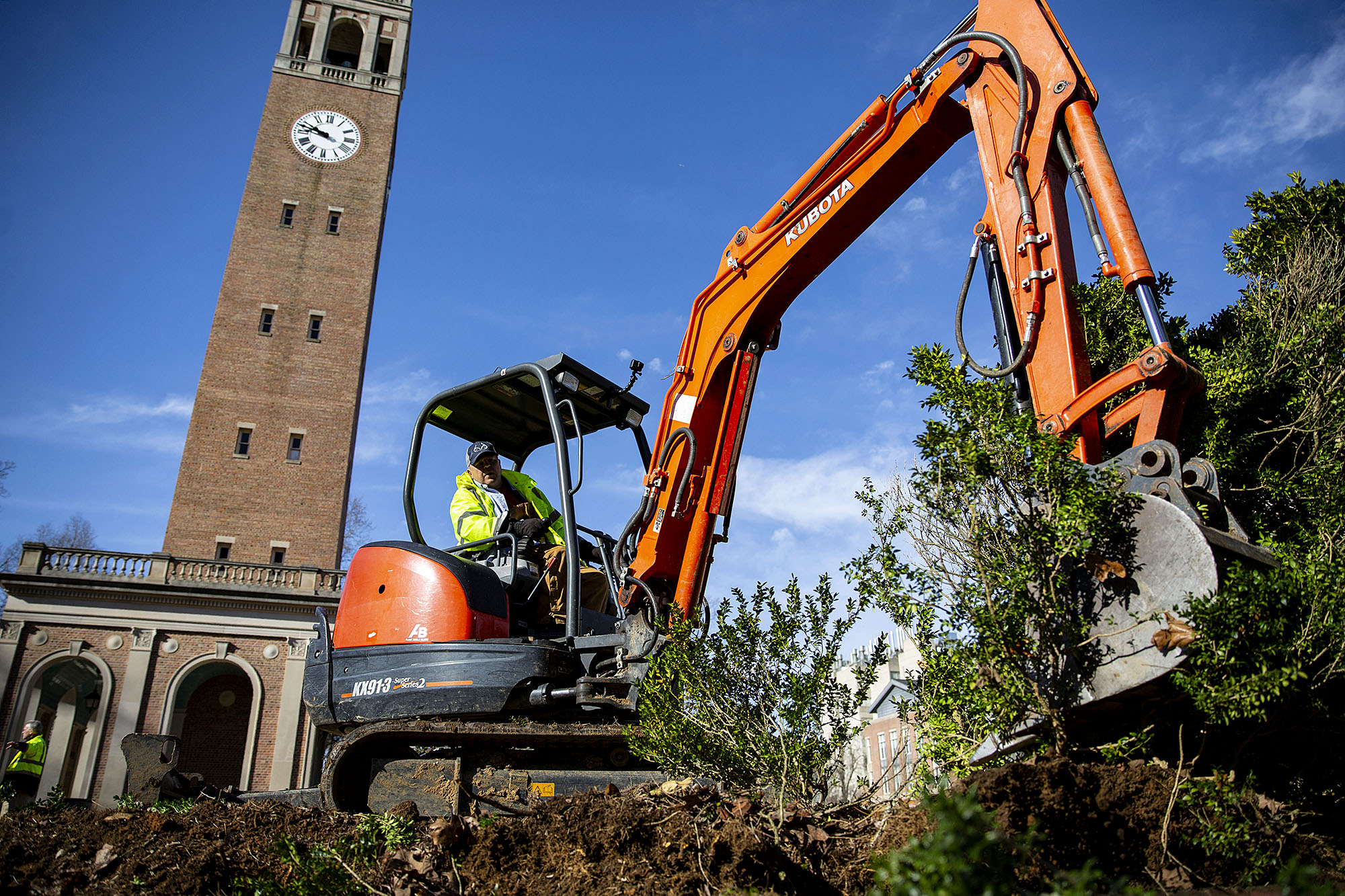 For perhaps the first time in its 83-year history, the Bell Tower is without its boxwood hedges.

Crews descended on the grounds of the campus icon on Wednesday, and before lunchtime, all that remained were the two outer circles on three sides — even those were removed on the South Road frontage.

Campus architect Evan Yassky said the hedges were “really in bad shape” and that groundskeepers had been “after us” to intervene. But the clearing also is part of a plan to open up and re-landscape the tower lawn to make it a more inviting gathering place. The facilities department doesn’t have the money to carry out all the plans now, Yassky said, but this was a start. Plans include drainage improvements and repairs to the brick paths. 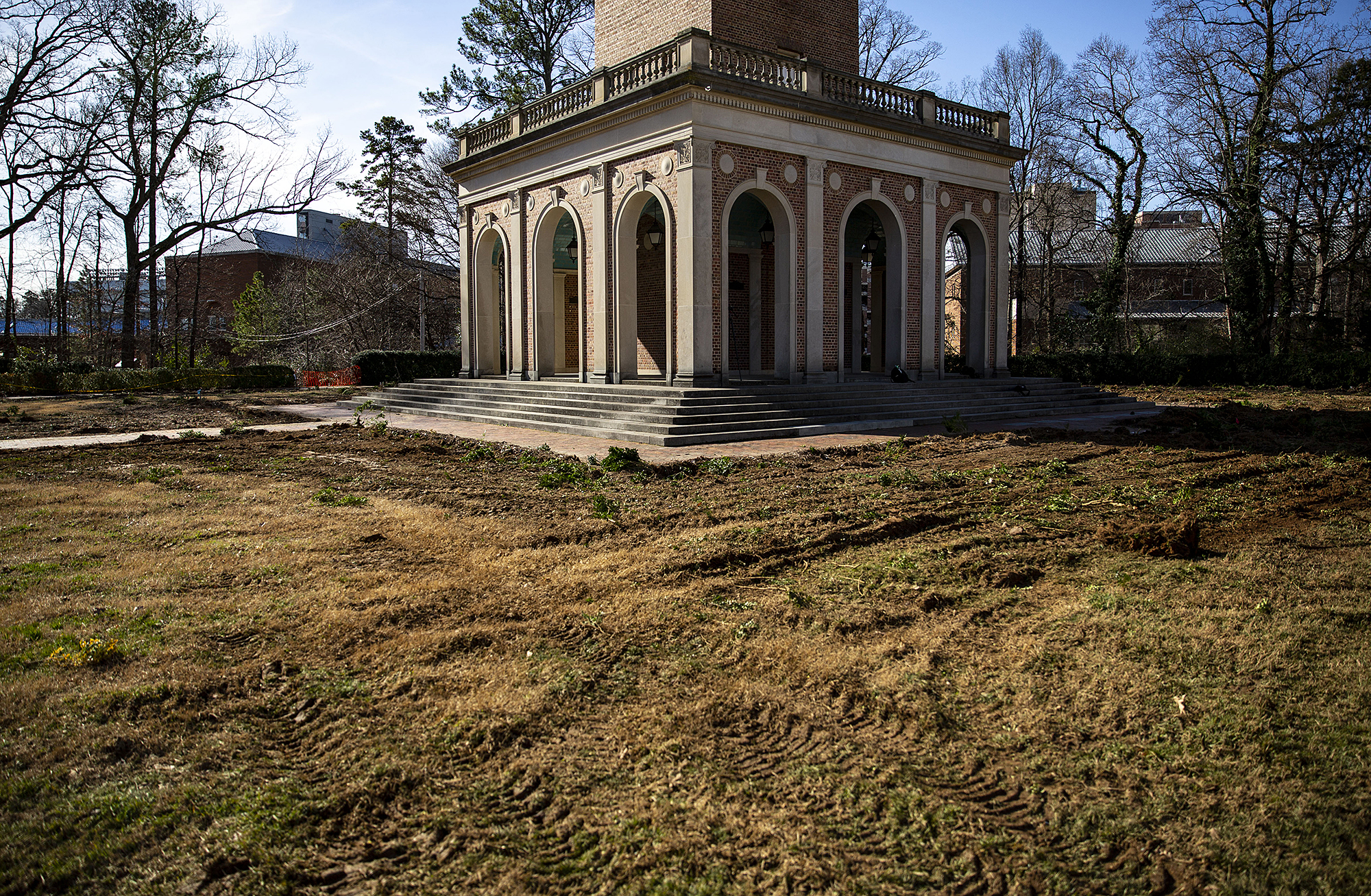 Clearing the area is part of a plan to open up and re-landscape the tower lawn to make it a more inviting gathering place.. (Photo by Alex Kormann)

Later, trees could be planted around the perimeter, which abuts Kenan Stadium’s surrounding forest, Kenan Woods.

The tower garden will remain open.

“We’re a different campus than when those [boxwoods] were planted,” said Jill Coleman ’76, campus landscape architect. “This is a historically underused asset. It’s time to better utilize that landscape. We’re excited about the programming we can do for students and the campus community.”

Temporary grass seeding will enable use of the garden at Commencement, and sod will be added in late spring.

Ten years ago, Coleman called the Bell Tower garden a “fortress” whose hedges discouraged pedestrians and may even have created a safety hazard. A study at the time said that while its “tower in the woods” character should be kept — possibly with even more plantings outside the garden and more prominent trees across South Road to tie the forest effect to the back of Wilson Library — the boxwoods along the road and in part of the interior should be removed.

A drawing at the time showed limestone steps or risers on the street side that could invite people onto the lawn and steps of the tower. Only the hedges in the northern half of the garden were shown missing in that schematic.

The study suggested the garden could become a center for campus memorials inscribed into seating and perhaps a low wall built into the back of the garden.

The GAA and other groups have made it a destination on football Saturdays, but on most days traffic around the tower is light.

The boxwoods were part of the original design of the garden, and the tower’s benefactors, John Motley Morehead III (class of 1891) and his cousin Rufus Patterson (class of 1893), agreed to cover their maintenance for their lifetimes.

People associated with the campus for many years could not remember a time when there were no hedges.

In 1939, somebody drove a car through the hedge, and the damage came to $306.90. The University billed Morehead, and he wrote back and said the previous year he had deposited $3,500 with the business office for the preliminary expenses of a building he had in mind to give the University. He said to take the 306 bucks out of that. The building he was referring to was to house the planetarium he gave Carolina.