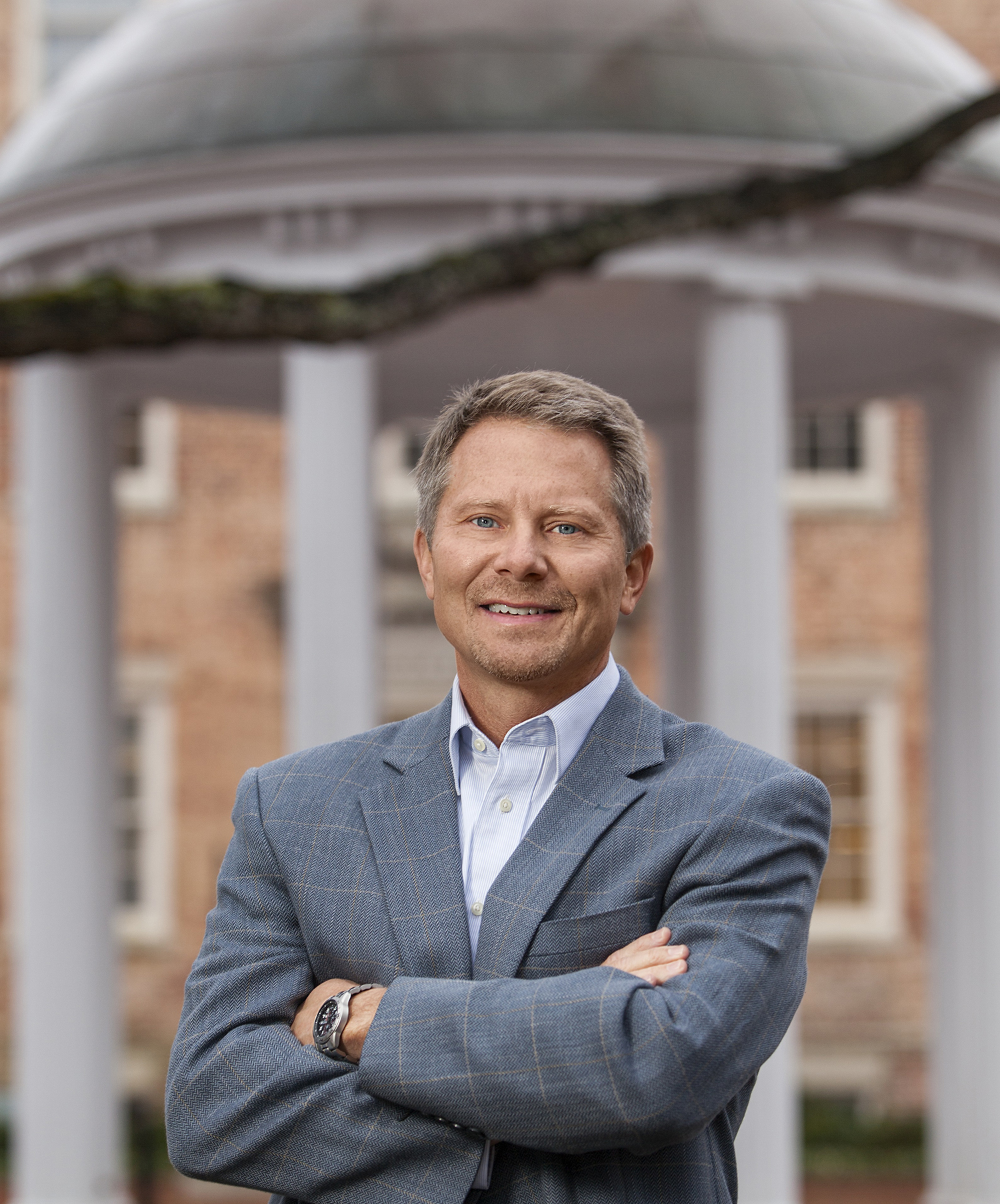 Kevin Guskiewicz, who has served on an interim basis since February and is a former dean of the College of Arts & Sciences, has been named UNC’s chancellor. (UNC photo/Kevin Seifert)

Kevin M. Guskiewicz, a neuroscientist and a household name in the relatively new scientific study of athletics-related brain injuries, is the University’s 12th chancellor.

Guskiewicz received the UNC System Board of Governors’ unanimous approval on Friday. He had been interim chancellor since February, and he became chancellor immediately. He had been one of two candidates recommended by Carolina’s trustees to UNC System Interim President William Roper, based on the recommendations of a 20-member search committee chaired by trustees’ Chair Richard Stevens ’70 (’74 MPA, ’74 JD).

Guskiewicz is at the helm of a highly regarded, affordable, accessible liberal arts school with particular strengths in the physical sciences. In recent years, the University has steadily climbed in the ranks of research universities in the U.S. for federal research expenditures, and in 2018 reached the top five in federal research funds. That a person in Guskiewicz’s field 25 years ago chose Carolina — a university without an engineering school — says as much as anything about the University’s appeal to scientists such as himself.

• Kenan Distinguished Professor of exercise and sport science, founding director of the Matthew Gfeller Sport-Related Traumatic Brain Injury Research Center and director of the Center for the Study of Retired Athletes.

• Holds appointments in the departments of orthopedics and physical medicine and rehabilitation, the UNC Injury Prevention Research Center and the doctoral program in human movement science.

• Dean of the College of Arts and Sciences, January 2016-February 2019. Prior to that, was chair of the department of exercise and sport science and senior associate dean for the natural sciences.

• Family: wife, Amy, and three sons and a daughter.

“I am humbled and honored to be named the 12th chancellor at The University of North Carolina at Chapel Hill,” Guskiewicz said. “Carolina has been my home for almost 25 years, and I am grateful for this opportunity to serve every member of our community. My vision for Carolina is that we will move forward into the future with boldness and confidence because our work is vital for the people of our state, the nation and the world. There is no institution in the world that is more capable of changing the future than our nation’s first public university. I am committed to championing our community, fighting for our values and demonstrating that we make a difference in the lives of all North Carolinians.”

One of Guskiewicz’s primary tasks will be to see out a $4.25 billion capital campaign scheduled to run through 2022; to date, $3 billion has been raised.

Whatever one gleans from catchwords, Guskiewicz’s siren song has been “strategic, bold and student-focused.” Data analytics will have a prominent place at the table.

Guskiewicz grew up near the training camp of his beloved Pittsburgh Steelers and, in two years as a graduate assistant on the Steelers’ training staff, he had an eye-opening view of the state of concussion diagnosis and management in the NFL. What he found was that trainers had to lean heavily on the subjective accounts of athletes — reports of headaches, dizziness, memory loss and the like.

“It was a very arbitrary way of making decisions around concussions,” he said. “There were no objective tools.” He was struck by the gap between the lack of sophistication in the approach and the sophistication of the organ at issue. “The brain.”

The work that would land him a prestigious MacArthur Fellowship — often called a “genius grant” — in 2011 and help lead to football rules changes, the methodical study of thousands of athletes and development of new tests for concussion in a world where the standard was walk it off and get back on the field.

Guskiewicz came to Chapel Hill in 1995 — on the first day of Michael Hooker ’69’s chancellorship; he considers himself a disciple of Hooker’s recommitment of Carolina to service to the state.

He shares the vision, too, of former Chancellor Holden Thorp ’86, who recognized that a university of such academic diversity has to find ways to bring different disciplines together around the world’s toughest problems.

“I’ve used the Wayne Gretzky analogy a few times,” Guskiewicz said some months ago. “He said he was a great hockey player not because he was a great skater or he could carry the puck very well, but he knew where the puck was gonna be, and he got to that spot.”

As dean of the College of Arts and Sciences for three years before he was named interim chancellor, Guskiewicz directed a periodic overhaul of the General Education curriculum, which will be fully in use in 2021. It took a new approach to undergraduate education that puts less emphasis on specific content and more on the skills and habits of mind students are expected to develop.

First-year seminars will expand, meaning that almost every new student will have at least one class centered on small-group discussion and close interaction with a full-time faculty member.

The biggest change is a move away from specific subject requirements. Where the previous curriculum was broken into broad buckets of content — U.S. Diversity, Visual and Performing Arts, The World Beyond the North Atlantic — the new approach highlights nine “focus capacities” that students are meant to gain, regardless of the class subject.

The new curriculum places less emphasis on what professors cover and more on how they teach. What students do in class — write at length, make public presentations, work in groups — will take precedence over the specific subjects they cover.

Guskiewicz inherits an institution ranked fifth among research universities in federal money related to research, on which it spends more than $1 billion annually. Carolina is 11th in annual research volume among public and private schools.

He has said he would like to see the percentage of undergraduates studying abroad, now about 41 percent and high nationally, grow to more than 50 percent.

UNC is consistently ranked at or near the top in affordable academic excellence. It also is highly ranked in accessibility for those who traditionally could not afford college, bolstered by the national model Carolina Covenant’s guarantee of a debt-free graduation to academically qualified students who fall within family income guidelines.

On the other hand, Carolina — which endured a long-running athletics-academics scandal that threatened its reputational luster — lately has been a magnet for controversy.

A recent survey showed that UNC’s longstanding difficulties dealing effectively with sexual assault, which it shares with many universities, apparently persist: More than one-third of undergraduate women who responded to a survey — and nearly half in their fourth year or higher — reported that they were sexually assaulted while at UNC.

The University tangled recently with the federal Office of Civil Rights over an alleged anti-Semitic act at a conference co-sponsored with Duke University on UNC’s campus in March. The Office of Civil Rights said the conference had created a hostile environment based on the discovery of anti-Semitic flyers found in Davis Library and books found left open to pictures of swastikas in an academic building in the weeks immediately afterward. The University did not admit to breaking any laws, but it reiterated its commitment to foster an environment free from prohibited harassment, including but not limited to anti-Semitic harassment.

Roper said his choice of Guskiewicz for the interim job was in part because Guskiewicz was determined Silent Sam should not be brought back to the campus.

In a letter to Roper and UNC System Board of Governors’ Chair Randy Ramsey following the recent settlement, Guskiewicz stated that the Sons of Confederate Veterans hold and promote “an unsupportable understanding of history that is at-odds with well-sourced, factual, and accurate accounts of responsible scholars.”

“I join with others on my campus in stating that the values expressed by the SCV are inconsistent with and antithetical to the values of the University,” he wrote.

Some faculty — particularly in the history department — have expressed a loss of patience at the pace of the University’s response to the trustees’ admonition in 2015 that UNC follow up the name change of Saunders Hall to Carolina Hall with a public airing of Carolina’s racial history. Some of that frustration was aired in classes taught in the fall in conjunction with a learning initiative begun under Guskiewicz called Race, Memory and Reimagining the Public University.

As the Silent Sam settlement went public, Guskiewicz said a new task force of 12 to 14 people, to be called the Commission on History, Race and A Way Forward, will be convened in January to continue to grapple with how Carolina curates its difficult history.

Guskiewicz says he envisioned a path to upper administration for himself in 2005, when he inherited the chair of the exercise and sport science department from the legendary Fred Mueller ’61 (’64 MEd, ’70 PhD).

“I had never really seen myself as taking on an academic leadership position, but from there we took off, we started doing some really great things in that department around graduate education. I enjoyed building things.”

After coming to Carolina, Guskiewicz served as head athletic trainer for the women’s lacrosse team for three years; in 1998, he became director of the concussion-testing program for all of UNC’s teams.

Guskiewicz’s lab conducted a long-term epidemiological study of hundreds of retired NFL players. The work uncovered a correlation between the number of concussions a player endured and the appearance of dementia, depression and other brain dysfunctions later in life. In 2004, he and his colleagues began placing accelerometers in the helmets of UNC football players. He used the data to analyze the number and severity of the hits (more than 1,000 in a season for some players) and their relation to concussion symptoms and to record the effects of so-called sub-threshold blows — those that don’t meet the standard of concussion.

These and other projects helped earn him the MacArthur Fellowship. “I would never have won a MacArthur had I been at any other university,” he said. “There were a lot of other universities that would have never bridged academic research with athletics. So I needed to be at a place where the athletics administrators, our team physicians, our coaches saw the value in this.”

His groundbreaking work has earned him numerous awards, including fellowships in the American College of Sports Medicine, the National Academy of Kinesiology and the National Athletic Trainers’ Association. His research also has influenced concussion guidelines and recommendations made by these organizations to the NCAA and the NFL.

Guskiewicz and his colleagues in the brain injury business got ESPN to cancel a Sunday night feature on the most spectacular hits of the day’s NFL games — youngsters were watching and trying to emulate those hits; Guskiewicz and others helped convince the league to move the kickoff line from the 30 to the 35 and got 33 percent more no-hit touchbacks the next season.

What does the new chancellor want?

At a meeting of the GAA Board of Directors in 2016, Guskiewicz was asked what he would do with a $100 million unrestricted gift. He divided the money evenly by four: