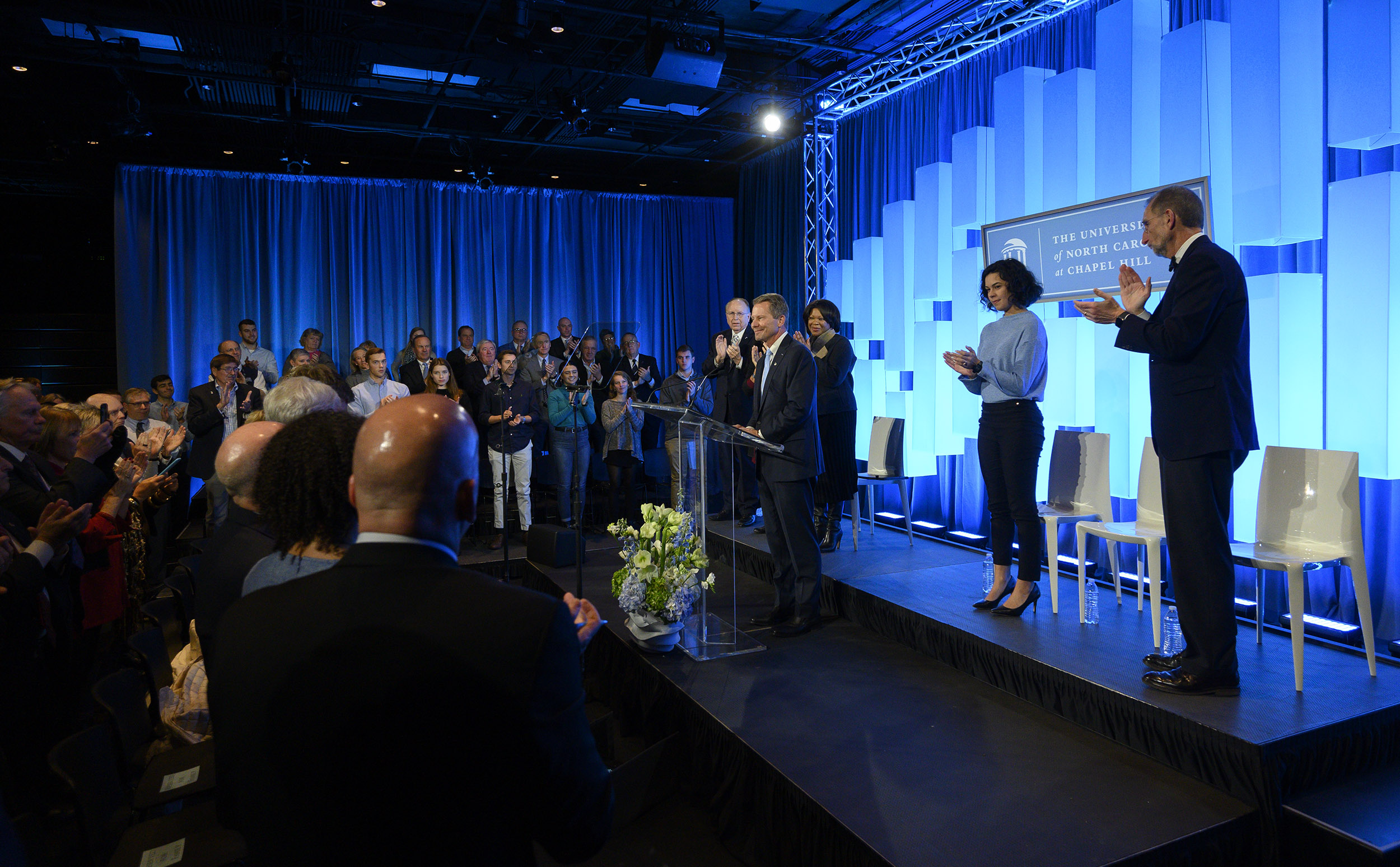 Kevin M. Guskiewicz receives a standing ovation as he is introduced as the University’s 12th chancellor during a ceremony on Dec. 13, 2019. (Grant Halverson ’93)

Kevin Guskiewicz has committed $5 million toward UNC’s History, Race and a Way Forward Commission to mark his selection as Carolina’s 12th chancellor.

The commission’s work is expected to be the University’s confrontation of its racial history, which was ordered by the Board of Trustees four and a half years ago.

“I’m announcing a long-term, significant investment to create stronger community here at Carolina,” Guskiewicz told an audience at a reception on  Dec. 13 following the UNC System Board of Governors’ approval of his selection. The fund, he said, “will include academic initiatives to strengthen our research and teaching, help us to study our past and learn from that past, build from that past and move forward together as a community.” 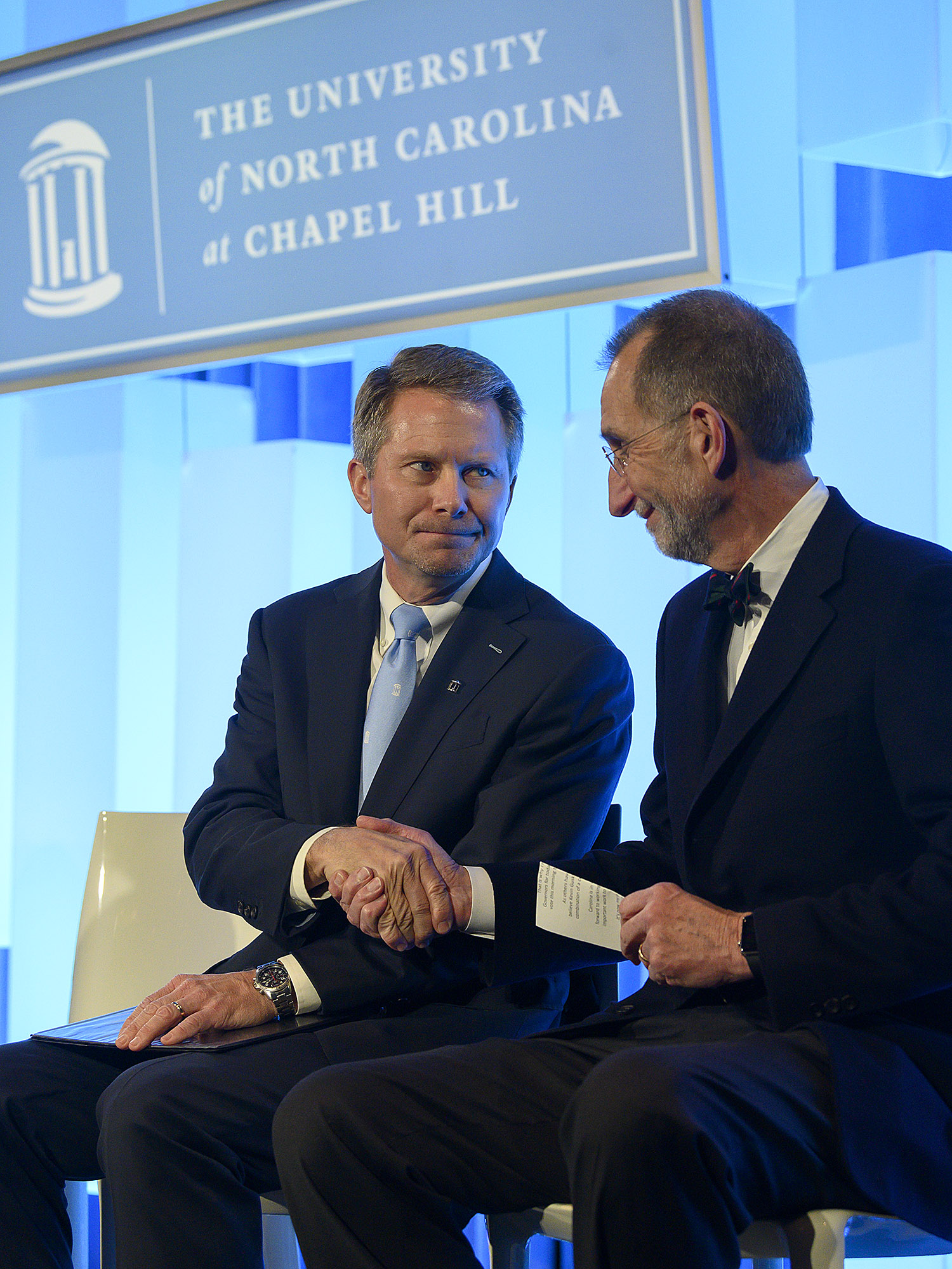 A previous task force that undertook the work was not funded and essentially suspended operation after the Confederate monument known as Silent Sam was pulled down by protesters in August 2018 and its pedestal removed by executive order in January 2019.

The University must “build our community together — diversity and inclusion must be a priority, and we must ensure that every person on our campus feels safe, welcome and included,” he said. Guskiewicz acknowledged the comments of student body President Ashton Martin, who preceded him on the program by calling for him to “publicly denounce hate and provide actionable solutions for the minority populations who have been harmed time and time again because of the statue.”

In his remarks, Guskiewicz repeated what he said to his wife, Amy, when he decided to come to Carolina 25 years ago.

“My vision for Carolina is that we will move forward into the future with boldness and confidence and that our work is vital for the people of North Carolina, the nation and the world.”

He said he was committed to raising $1 billion for scholarships in the current $4.25 billion capital campaign that is scheduled to run through 2022; to date, $3 billion has been raised.

“Universities offer hope — they are the closest thing to a level playing field that society has created.”

“My vision for Carolina is that we will move forward into the future with boldness and confidence and that our work is vital for the people of North Carolina, the nation and the world.”

Earlier in the day, UNC System President William Roper said: “Kevin Guskiewicz possesses the leadership qualities needed to take Carolina forward: strength, poise, humility, vision, the strong proficiency to listen, and the ability to bring people together. Throughout his distinguished career in higher education, Kevin has demonstrated a sustained track record of success. I have the utmost confidence that UNC-Chapel Hill will continue to flourish and prosper under his continued leadership.”

Board of Governors’ Chair Randy Ramsey added: “Under his leadership, as both interim chancellor and dean [of the College of Arts and Sciences], he has won praise from his peers as the University has celebrated many successes. Now that he is formally installed, the University will be able to harness this momentum and set a clear course for long-term achievement. His leadership will provide operational stability while also promoting innovations in teaching and research that have secured UNC-Chapel Hill’s reputation as one of the top public universities in the world.”

“Carolina has been my home for almost 25 years, and I am grateful for this opportunity to serve every member of our community,” Guskiewicz said. “There is no institution in the world that is more capable of changing the future than our nation’s first public university. I am committed to championing our community, fighting for our values and demonstrating that we make a difference in the lives of all North Carolinians.”