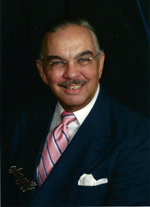 They say you never really know someone until you fold your more than six-foot-tall frame into a VW bug with an equally tall friend and drive 2,000 miles over the 10 days of spring break to visit colleges that have graduate degree programs in business. But Wade Chestnut ’66 knew where he wanted to go in life, and he knew what it would take to get there. And he persuaded his med school-bound friend Eddie Hoover ’65 to tour campuses with him.
“Wade said he wanted to be in business; he wanted to be in the overseas division of a major corporation; and he wanted to get an MBA,” Eddie recalled. “And he went out and made it happen.”

Wade had role models from a young age to steer him toward a path to success. His father owned a restaurant and fishing pier on Topsail Island, and developed oceanfront property that he sold to African-Americans to enable them to have access to the beach. Wade worked in the family businesses with his father until his father’s death when Wade was 16. Then “Lawyer Beech,” as he was known to the family, stepped in and “told me all the things an adult would tell a kid growing up,” Wade said. Harvey Beech shepherded Wade to college, first at N.C. Central before convincing Wade, at the end of his freshman year, that he belonged at

Carolina. Wade may have been the first African-American to obtain an undergraduate business degree from UNC. He completed his MBA at Bradley College in Illinois and went to work for Caterpillar in corporate finance.

“He broke new ground at Caterpillar,” Eddie said. “He was probably the only black person there who was not on the production line.”

In 1980, Wade implemented the next step in his career plan by accepting an assignment in Hong Kong with Caterpillar Far East, possibly the first African-American to accept an overseas post with a Fortune 500 company. He continued to build his career in Hong Kong for the next 16 years, even after leaving Caterpillar. His success in business impressed his classmates. “It’s one thing to be a physician or lawyer or teacher and go back to your community to work,” Eddie said of forging a career in the ’60s. “It’s another thing to go to a completely foreign place and succeed as an African-American in that era.”

George McDaniel ’68 noted that success like Wade’s leads to systemic change. “The first minority who comes into an organization and makes a positive, constructive impression, that opens doors,” George said. He considered Wade a role model and followed his lead with a business degree, making a career in banking. At one point, Wade and George found themselves part of a gathering of dozens of senior executives and bankers, and they were the only two African-Americans in the room.

“We were equally proud of each other,” George said. “We both knew the journey we’d taken to get there.”  In 1996, family matters brought Wade back to North Carolina, where he helped out with the family business and continued his own business brokering commodities across international markets. Later, he was recruited to directorships in the Democratic Party. He overcame his initial reluctance when he realized that traveling all over the state would enable him to reconnect with North Carolina after he’d been away for 30 years.

More recently, he became a certified mediator as a way to transition into retirement. And he was one of the small group of alumni who organized the Black Pioneers at UNC. Over the years, Wade has made to time to volunteer his service on nearly 40 boards, commissions and councils, often in leadership positions. He is active in his church, assisting in disaster relief efforts, aiding the homeless and serving on the Episcopal Campus Ministry Board. He makes time to mentor students, particularly encouraging them to participate in study-abroad programs.

That Wade continues to step in and help where needed doesn’t surprise George McDaniel. Wade did the same thing

as a student a half century ago. “There was no reason for him to help me other than I needed help,” George said of Wade, who was an upperclassman when he was a freshman. “He showed me around and showed me the ropes and was critical when I needed it. ‘You need to be in your room studying, not hanging out at the grill,’ he’d say. ‘We’re here to get an education.’ ”