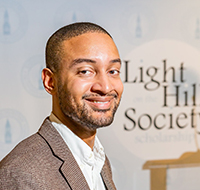 Atrayus O.  Goode, a communication studies major from Charlotte, North Carolina, is passionate about mentoring. From having more than one positive role model in his life to founding an organization focused on mentoring youth, Goode has seen firsthand the impact of helping others.

Goode’s path to higher education was not an easy one to travel. He faced several complex life challenges and turned to 100 Black Men of America for guidance. He credits the group not only with providing emotional and social support to navigate his way through middle and high school, but also with being instrumental in helping him find his way to Carolina. 100 Black Men awarded Goode a scholarship, allowing him to become the first in his family to go to college.

At Carolina, Goode joined the Black Student Movement, a connection he said provided refuge from the larger campus environment. Involvement with several BSM subcommittees also nurtured Goode’s racial identity. That foundation led him to create Movement of Youth with $500 during his junior year as a way to give back to others. He said he had an obligation to find ways to make a positive return on the investments others made in him.

While at Carolina, Goode felt he often encountered microagressions from white students who questioned his right to attend Carolina. Those experiences, and his unbridled passion for service to youth – particularly students of color – led him to expand Movement of Youth and explore ways to leverage mentoring for racial equity and social justice. What followed is a case study in community impact.

In 2015, Goode became a full-time staff member at Mouth of Youth, and secured close to $1 million in funding from various sources, attracting the attention of several national organizations, including My Brother’s Keeper Alliance, a nonprofit launched by President Barack Obama that leads impact work for boys and young men of color across the country.

Goode’s work with Movement of Youth led to the organization’s 2016 recognition as the North Carolina Innovative Program of the Year by the Public School Forum of North Carolina. In addition to his work with Movement of Youth, Goode was selected to lead two African-American delegations to Cuba through the international nonprofit Witness for Peace. His delegation included activists, NGO leaders and scholars from across the United States who explored the intersections between race, class and gender in Cuban society. They also documented the impact of the U.S. embargo on different communities in Cuba, in particular Afro-Cubans. Goode has since extended his global work to youth and sent several students abroad, including five to Cuba this past summer.

Gail Phares, Witness for Peace co-founder, recently appointed Goode to serve on the national board of directors because of his efforts. He is also co-chair of My Brother’s Keeper Orange County and an advisory board member with the North Carolina Center for Afterschool Programs. Goode, who also holds a master’s of science in organization development from the American University School of Public Affairs in Washington, D.C., is pursuing a master’s of arts in Christian practice from Duke Divinity School.

“I am a testament to the power of mentoring, and I am thankful to have had an abundance of positive role models who have helped guide me along my journey, while helping me navigate several complex life challenges that had the potential to derail my life,” Goode said. “I had an obligation to find ways to make a positive return on the investments others had made in me.”