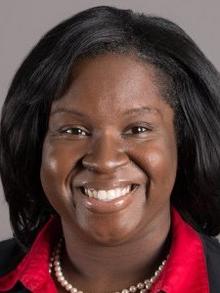 In only 13 years since graduating from UNC, Nimasheena Niveshia Burns ’06 has amassed an awarding-winning public service record in public affairs.

Currently, she’s director of communications and project management for the N.C. Department of Military and Veterans Affairs.

Burns has served as a guest consumer analyst for various media outlets  and has made over 1,000 keynote, presenter and consultative appearances, speaking on issues ranging from cybersecurity and identify theft to Medicare fraud and human trafficking. She has lectured at more than 20 of the state’s public and private universities.

Burns is committed to and invested in her community, evidenced through her various nonprofit board appointments including N.C. Women’s Empowerment Conference, the N.C. Recidivism Taskforce and Helping All People Excel, or H.A.P.E., for which she was named Board of Directors chair in 2018.

After years of caring for her sister who thrives — not suffers — with Lupus  and kidney disease, Burns noticed the prominence of kidney failure in the black community. In 2013, she received an Albert Schweitzer Public Health Fellowship and used the funding to start the Don’t Kid Yourself Foundation, which aims for early detection of kidney failure. Burns partnered with UNC Hospitals’ Kidney Bus to travel to distressed African American communities in rural southeastern North Carolina to test kidney function and provide access to resources for those needing further treatment.

For over eight years, she served as a member of the Governor’s Multi-Discipline Grant Review Team and oversaw grant review for projects, awards and allocations for issues including human trafficking, domestic violence and workforce development.

She was recently re-awarded a $3 million grant for the North Carolina Defense Industry Diversification Initiative, a project she co-founded and through which she works with some of the state’s most vulnerable companies to support diversification of their work and product portfolio.

“She stood out from other graduate students through her leadership, community service, scholarship and passion for public administration,” said Caldwell. “As she advanced through her graduate program, I watched her grow into a polished professional and outstanding student leader.”

Caldwell, who has invited Burns to speak to her classes, cited her as “an outstanding representative of Carolina through her dedication to a career in public service.”

“Ms. Burns is quite tenacious and is often sought out by financial institutions, nonprofits and business stakeholders for her work in cybersecurity,” Hall said. “She brings to all of her projects energy, enthusiasm and commitment … and consistently delivers high-quality project development for our agency.”

Born in Tar Heel, North Carolina, Burns earned her bachelor’s degree in political science and communications from UNC before earning her master’s in public affairs, with an emphasis in intergovernmental relations and economic development, from NCCU. She’s currently working on a master’s degree in cybersecurity from Brown University.

Burns was named to the Triangle Business Journal’s 40 under 40 list in 2017 and earned its Woman in Public Policy Award in 2016. Burns also was named the 2016 Wells Fargo/Blue Cross and Blue Shield Young Executive of the Year, and in 2016 she was named Spectacular Magazine’s Emerging Leader of the Year.

“I have worked in so many industries, … and the commonality among them is my unwavering love of public service and of giving back in the neediest of places,” Burns said. “The Carolina accomplishment taught me to dream bigger, set bigger goals and broaden my perspective, and I’m just getting started.”