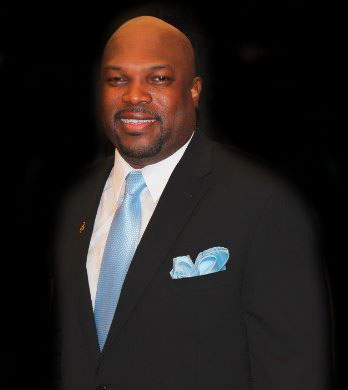 Since joining UNC as an instructional media services manager in the Gillings School of GlobalPublic Health, O.J. McGhee also has served as the women’s basketball PA announcer and head coach of the club football team.

“I’ve been part of the UNC-Chapel Hill campus since 2001 and have had many experiences that have helped me grow personally and professionally,” said McGhee, a native of Washington, D.C. “While it’s difficult to select just one significant highlight, I believe my work as chair of the Carolina Black Caucus has become a defining moment in my professional life.”

As CBC chair, McGhee was involved in a variety of initiatives and activities but found his work with Carolina’s students among the most rewarding aspect of the position. “They are some of the most impressive and talented students in the nation,” McGhee said. “It’s been a pleasure mentoring and collaborating with them. However, it’s their resolve to remove the Silent Sam statue from the gateway of campus that reminds me of the words of James Baldwin that ‘not everything faced can be changed, but nothing can be changed until it is faced.’ It’s in that spirit that I’ve continued to not only advocate and speak about removal of these oppressive symbols, but also on other campus issues such as the recruitment and retention of African American faculty, mandatory implicit bias trainings and a centralized exit interview process.”

Cecelia Moore, University historian and project manager of the Chancellor’s Task Force on UNC-Chapel Hill History, heralds McGhee as an excellent choice for the Hortense K. McClinton Outstanding Faculty Staff Award.  “I’ve worked with Mr. McGhee on both University and community projects, primarily in his role as chair of the CBC,” Moore said. “He’s an outstanding and thoughtful advocate for the University and its employees and students.”

Moore said McGhee is “truly deserving” of being recognized for everything he does for Carolina.”

“I’ve had the fortune to witness, with great admiration, his aptitude for using his gifts as an educator and mentor, as  well as his professional acumen, to establish a lasting, trusting relationship with both the students and faculty at UNC as well as the citizens of Chapel Hill,” Mason-Hogans said. “He possesses the rare ability to move seamlessly between various and intergenerational groups and organizations.”

McGhee, a married father of one, is a graduate of Clark Atlanta University, where he was a student-athlete and worked for the campus cable TV station. After graduating from Clark Atlanta, he returned to D.C. and worked for the Black College Satellite Network, producing a variety of broadcasts around the country before enrolling at Ohio University to pursue a graduate degree in telecommunication management. After earning his master’s, he worked at BET and later taught at Morgan State University in Baltimore.

McGhee came to Carolina after working as director of communications at Florida A&M University’s College of Engineering Sciences, Technology & Agriculture and also has taught part-time at North Carolina State University. He currently serves as a member of the Inclusive Excellence Council in UNC’s Gillings School of Global Public Health and is pursuing a doctoral degree in higher education leadership at UNC-Wilmington.

“As a passionate advocate for equality, I would hope to make a difference in our community,” McGhee said. “But, without question, I will forever be grateful for the heartfelt difference the Caucus and our campus made on me.”