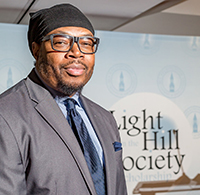 Samuel B. Perkins, a communications major from Brooklyn, New York, used the foundation he built at Carolina to soar to great heights, while also lifting others as he climbed. Perkins came to Carolina in 1980 under Coach Dean E. Smith as a member of the men’s basketball team. From that moment on, Perkins has been a force in the basketball world. During his first year at Carolina, he was named ACC Rookie of the Year and ACC Tournament MVP. He went on to be named a first team All-American and All-ACC player 1981-1984. Perkins built impressive stats; he ranks second in Carolina basketball history in rebounds, third in scoring and blocked shots, fourth in double-doubles, and played in 115 UNC wins. Topping it all off, Perkins was part of the 1982 NCAA men’s basketball national championship team.

When Perkins graduated from Carolina in 1984, he continued to rise to the top. As the fourth overall pick by the Dallas Mavericks, Perkins pursued a career in the NBA. During his 17-year tenure, Perkins played for the Dallas Mavericks, Los Angeles Lakers, Seattle SuperSonics and Indiana Pacers. He scored 15,000 points and played in the NBA finals with the Lakers, SuperSonics and Pacers.

He won an Olympic gold medal as a member of the United States Olympic Team at the Los Angeles Olympics in 1984. As he did at Carolina and in the NBA, Perkins excelled, being named the team’s co-captain as well as USA Basketball Male Athlete of the Year.

Throughout his professional career, service remained a focus for Perkins. The excitement and demands of his successful basketball career never deterred him from returning to the Chapel Hill area year after year to conduct basketball camps in the community. Perkins has impacted hundreds of Chapel Hill-Carrboro students with his skill and character-based basketball camp and mentoring program. Since 2000, Perkins has hosted a week-long basketball camp at East Chapel Hill High School for children ages 8-16. He always displays a dynamic personality and inspires younger children to play basketball.

After retiring from the NBA in 2001, Perkins worked as vice president of player relations for the Indiana Pacers, the team he played with from 1999 to 2001. As a retired player, he continues to work with the NBA through the NBA Cares program, the league’s social responsibility initiative that builds on the NBA’s long tradition of addressing important social issues nationally and internationally.

Years after leaving Carolina, Perkins continues to philanthropically support his alma mater and has served as a board member with the General Alumni Association. He supports The United Way, Habitat for Humanity, Boys & Girls Clubs, United Negro College Fund, Lupus Foundation, Special Olympics, Order of the Golden Fleece, and breast cancer and pediatric HIV/AIDS research. Perkins has also been heavily involved with Kappa Alpha Psi Fraternity, Inc. and recently held the position of Polemarch.

In recognition of his basketball talent, Perkins was recognized in 2002 as part of the ACC 50th Anniversary Men’s Basketball Team and in 2008 was inducted into the New York City Basketball Hall of Fame. He was awarded the Anheuser-Busch Freedom Award during Military Appreciation Night at the NBA Summer League games in Las Vegas, and in November 2018, Perkins will achieve another career milestone when he is inducted into the National Collegiate Basketball Hall of Fame.

Nominator Bernadette Cobb ‘84 said, “Sam Perkins has been an outstanding representative of the values of The University of North Carolina at Chapel Hill. He is a passionate leader in the community and a master in his profession, excelling to the stature that most only dream of. Over the years, Sam has achieved great honors and risen to the top of his profession, all the while giving back as much as he gained to others. Given the impact that Sam has had throughout the Tar Heel community, nationally and globally, he is most deserving of the prestigious Harvey Beech Overall Achievement Award.”