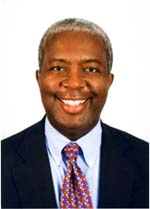 Colleagues of Sam Fulwood ’78 consider him the Yoda of the Washington think tank Center for American Progress, where he is a senior fellow. But invert his sentences, he does not. And he is a much sharper dresser.

As a teenager, Sam made it his life’s ambition to become a journalist with The Charlotte Observer, his hometown newspaper. He applied to only one university — Carolina, a state school with a journalism program — but was not sure he would last. So the first thing he did on campus was get his picture taken for the yearbook. Regardless of how his year unfolded, he’d at least have proof that he’d been admitted.

Sam excelled academically. He was tapped for membership into the Order of the Old Well and the Order of the Grail. He made the dean’s list and helped organize a chapter of Alpha Phi Alpha, which had the highest GPA of any fraternity at Carolina. In UNC, he found a tiny black college in the midst of a large white institution. He settled into a secure community in Chapel Hill, a liberating experience that gave him an independence he hadn’t known before. He wrote for Black Ink and The Daily Tar Heel, where he learned to talk to strangers and operate in the world outside his social network.

By February of his senior year, the Observer had offered him a job as a staff reporter. Not yet 21 and still in college, he had achieved what he had set out to do in life. It occurred to him maybe he needed to dream bigger.

An optimist with a debonair appearance, both rarities among more typically cynical and rumpled journalists, Sam has an inquisitive mind and a penchant for detail. He embraced new technology from an early age and owns every device Apple makes. Never one to mince words, he stays focused, perseveres and moves forward rather than getting sidetracked worrying about what someone else did or didn’t do. His spirit of adventure pushed him to say yes as opportunities arose.

His three decades in journalism took him far beyond Charlotte. Sam left the Observer for The Baltimore Sun, then The Atlanta Journal-Constitution. The Los Angeles Times sent him to Washington as a national correspondent, where in addition to filling in as a White House correspondent, he created a national race-relations beat. His articles were part of the package that won a Pulitzer Prize for the Times’ coverage of the 1992 Los Angeles riots following the Rodney King verdict. As the Sun’s South Africa bureau correspondent, he spent about a year in Johannesburg covering the dismantling of apartheid after Nelson Mandela’s release from prison. He continued the race-relations discussion back in the U.S. as a columnist for the Cleveland Plain Dealer, where he held elected officials’ feet to the fire.

Academics took note of his work as well. In 1994, Sam was named a Nieman Foundation Fellow at Harvard and now serves on the foundation’s board of advisers. He returned to Harvard in 2000 as an Institute of Politics Fellow. Three years later, he taught courses on media, politics and pop culture as a Presidential Fellow at Case Western Reserve University. He currently teaches as an adjunct professor in American University’s School of Communications and in an advanced academic program at Johns Hopkins University.

When the field of journalism changed radically, Sam made the transition from journalism to a think tank in Washington. There he analyzes the influence of national politics and domestic policies on communities of color. He also created the Leadership Institute at CAP, bringing together promising future policy leaders with key figures in Washington politics.

Along the way, Sam found time to write two books, including his autobiography, that delved into race relations. He taught himself blues guitar and has a reputation as a lethal poker player. As an alumnus, he has served on UNC’s Board of Visitors and currently sits on the board of advisers for the journalism school. He mentors young men through Alpha Phi Alpha. He offered his home as a free hotel when several out-of-town friends joined him in the Million Man March in 1995.

In many ways, Sam has created a leadership pipeline for people of color to make their marks in policy. As Yoda might say: Proud of Sam, Harvey Beech would be.