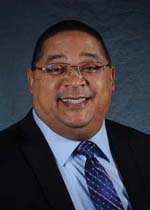 As a law student, Winston Crisp ’92 had his future all planned out. He was going to have a fabulous legal career, then sunset into education. Judith Wegner, dean of the law school at the time and Winston’s mentor, saw a different future for him. While he was determined to be a litigator, she recognized the natural-born teacher in him. As soon as Winston got his law degree, Judith made him her assistant dean for student services at the law school.  Winston says that she “made it very difficult for me to do anything other than to show me she was right.”

She said: “Give it a chance.” He did, and he never looked back.

Winston has been at Carolina since he enrolled in law school in 1989, fresh out of Johnson C. Smith University, where he attended on a full scholarship. Every time he got restless and began casting his net for a new challenge, some new opportunity opened up at UNC that enabled him to stay in Chapel Hill and advance his career. Since 2010, he has been the University’s vice chancellor for student affairs.

“I’ve been fortunate to stay at the place I love,” Winston said. “I really have found a place that matters to me.”

And he has plenty of places for comparison. With his father a career military man, Winston and his family lived throughout Europe and the U.S., ultimately returning to Fayetteville to be close to extended family on both sides. Having made Chapel Hill his home, he invests in the community through his work on the boards of the Dispute Resolution Center and the Orange County Rape Crisis Center. He is a Boy Scout merit badge leader, and on at least one occasion passed up good seats to a Carolina basketball game because it conflicted with the schedule of the Carrboro Parks and Rec basketball team he coaches.

Winston connects easily with youngsters, college students and their parents, and his co-workers up and down the hierarchy. He sometimes moves rules aside to make room for common sense. He has earned a reputation as a problem-solver, able to sort through tangled situations and prioritize. And for him, the top priority always comes down to what is best for students.

Always, he makes time for students — 24/7, if necessary — who need to talk through problems. His energetic, hands-on leadership style means that he calls students on the carpet when they need it, like his passionate and strongly worded speech to fraternity members to demand they shape up and stop the hazing and underage drinking his office frequently dealt with.

College is a time for young people to make mistakes and learn from them. Winston makes sure students have the best possible environment in which to live and learn, grow and mature, and find their voices and their ways in the world.

Winston’s ability to think clearly and come through in a crisis has been tested far too many times. When a mentally ill law student, killed two people at random in 1995, Winston was the person people leaned on for support. When student body president Eve Carson ’08 was murdered in 2008, Winston was a steadying force on a grief-stricken campus. In between and since have been other unexpected deaths that have cut to the heart of students, faculty and staff. And Winston is the one they turn to for guidance.

The tragedies affect him profoundly, too, but he copes with it privately. He values family and friendships deeply. He builds a strong team connection among staff and finds ways to lighten the mood when the days seem dark.

He takes the yin with the yang in his work with students, and admits they give him much more joy than angst. “People were there when I needed them; they taught me the lessons I needed to keep me from some disaster in life,” he said. “Without them, I don’t know where I would be or even if I would be.”

He pays them back by paying it forward.