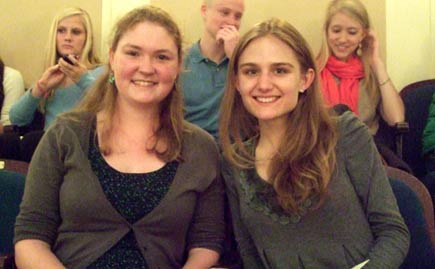 Nothing says “fall” like football turning into basketball season, hot apple cider warming from the inside out and crisp golden leaves crunching underfoot. But only after the Clef Hangers — UNC’s most-tenured all-male a cappella group — performs in Memorial Hall do I really feel the turn of the seasons.

The group’s 34th annual fall concert was marked by many hallowed traditions — the infamous khakis and powder blue bowties, the singing of favorites like Carolina in My Mind and Dear Old Chapel Hill and the invitation extended to all Clef Hanger alumni to sing a few more can’t-misses.

A gigantic red, white and blue bowtie, constructed of twinkle lights, hung from the rafters — a tribute to the concert’s election theme. Throughout the concert, the group showed videos supporting its president for a seat in the Oval Office; highlights included altered footage from the presidential debates, featuring a dumbfounded Barack Obama and Mitt Romney and an equally confused Jim Lehrer, who moderated the first debate. The patriotic theme resonated down to the final song of the evening, America the Beautiful, sung by sophomore Jeffrey Popkin.

While the upcoming election and “The Pursuit of Harmony” was the group’s official theme, the Carolina spirit trumped even patriotism when one of the members referred to the deaths of three UNC students earlier this year. He dedicated the singing of Ave Maria to the three beloved students: Faith Hedgepeth, Trevor Dolan and David Palmer Shannon.

The audience hung on the slow, melodic words, which seemed to reverberate from the singers’ hearts, not voices. “Ave Maria! Maiden mild/ Heed your children’s prayers/ In the valley of tears, be our shield/ Let my prayer waft to you.” And “O give peace to our hearts!/ Ave Maria!”

The lyrics fit a mood on campus, which does not quite fit a traditional Carolina autumn. And yet, this fall has been marked — or rather marred — by the deaths of three students; two of which are still shrouded in mystery. Just as the Clefs’ rendition of Ave Maria gave the audience space to remember, I too, would like to honor each student with a few words.

Faith, a junior who hoped to become a doctor, is remembered for her smile, her lively spirit and her constant reminder to friends and family to, well, “Just have faith.” These were the last words she shared with her father via text, just hours before her homicide.

Faith’s devotion and commitment extended beyond campus as well. She was a beloved waitress at Red Robin Gourmet Burgers in Durham, where in the week following her death, the staff struggled to continue on as Faith missed shift after shift. Her presence did not go unnoticed.

David, a first-year, had already become active in his UNC community. A pledge of Chi Phi fraternity, he had quickly hooked onto the fraternity’s involvement with Habitat for Humanity, writing campaign letters and raising more money than anyone else in his pledge class to build a new home for someone in the Carrboro community.

At a memorial vigil held in David’s honor, friend and fellow pledge brother Stuart Castillo said of David: “He brought out the best in all those around him. People say happiness is a choice, and on an individual level. David made the choice to be happy each and every day of his life. The example that David sets for us gives us the opportunity to make the same choice to be happy every day. I want to encourage everyone to honor David’s memory by living as he did and by perpetually striving to bring the most pure and unfiltered love to everything you do and everyone you meet.”

Trevor, a senior who was looking at a career in the culinary arts, was known for his outgoing personality and ability to befriend everyone he met. Trevor’s death — a suicide — has gone largely unnoticed by the Carolina community, in part because of the taboo surrounding his death and in part because of the unanswered questions still surrounding the deaths of the other two students. But just last week, his friend, Taylor Hartley, wrote a column in The Daily Tar Heel that seemed to bring Trevor back to life — if only in print.

Taylor wrote: “He was the kind of person who always asked you how you were doing, even if his day was terrible. He always had some crazy story to tell. Junior year, he and his four roommates — all of whom have been friends since the start of college — hosted competitions. If you lost, you had to empty the dishwasher. They all found out, to their horror, that Trevor could eat a giant carrot in 45 seconds and stuff five ice cubes in his mouth at one time. He never emptied the dishwasher. Not once.” Surely, Trevor’s memory will last on with the friends he left behind — friends struggling with answers, as opposed to questions.

Faith, David and Trevor had each made and were making a difference in the Carolina community. In a season often associated with excitement and new beginnings, it’s difficult to comprehend the loss of these students. Autumn renders loss beautiful in the falling of crimson and auburn leaves. The passing of these students can never be called beautiful. But the way that they are being remembered — both by those who knew them in life and by those who met them in the stories their friends shared after their deaths — is still beautiful.

The Clefs’ Ave Maria is just one small tribute to the heel prints these students made before their passing. Heel prints we can never attempt to fill but must always strive to remember.