College Stories 2011: At Home in the Pink Building on Polk Place

At Home in the Pink Building on Polk Place 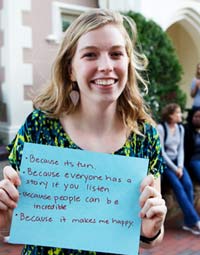 It was pouring. The first time that I walked into the Campus Y, it was raining, and there were towels, trash bags and umbrellas in the doorway. Very dry upperclassmen with tri-folds outlining their committees laughed as I wrung out my new red dress. I felt at home.

“The Campus Y,” I was told, “is a hub for over 20 committees and special projects. Our groups do everything from promoting human rights, to working on sustainable international development, facilitating friendships between students and the elderly, to focusing on empowerment for homeless and impoverished individuals in the local community.” I was excited, optimistic and cold. The air conditioning in the building is spectacular.

A few weeks into my freshman year, I knew that the Y would be central to my experience at Carolina but was unable to diagnose what I found so appealing until the second semester of my sophomore year. That semester several friends and I decided to study the idea of generations in an independent study with Ruel Tyson. We talked about the lost generation, the greatest, the babies who boomed, and speculated on what we would be, what we should be. So often in classes and lectures, students are told that the future our country, the future of the world is dependent on our leadership. Social Security, global warming, energy dependency, national security, outsourcing, widening economic disparity, are problems we will have to address. I imagine this charge has been the thesis of commencement speeches for hundreds of years.

There is so much to be done it can seem overwhelming and paralyzing. The Campus Y is sort of an antidote to this inaction. It offers an environment where, surrounded by individuals committed to helping others, daily accomplishments help your realize that improvement is plausible.

This past year, my junior year, I served as one of the co-presidents of the Campus Y. One of my favorite aspects of being co-president was the opportunity to talk about the amazing work of our committees. Much of my inspiration came from hearing, reading and listening to the work and hopes of many students involved in the Y, and there is not space to do adequate justice to over 25 groups and over 50 incredible leaders. Nothing in the Campus Y is accomplished alone. Almost all initiatives are created collaboratively and orchestrated collectively. I will discuss a few of the initiatives I have been a part of or observed and what I have learned from them.

This past year we had the 150th anniversary of the Campus Y. As a history major, I wanted to make sure that we understood our past as we shaped our platform and the anniversary celebration; I also wanted an excuse to be in the archives. Through an independent study with Bill Ferris, Hudson Vaughn, and Sandra Davidson, I learned about the Campus Y when Frank Porter Graham was a student, when my grandmother was a student, during the ’60s and ’70s, and in between.

Each history that I read, taught me something new. I learned quite a bit from reading Anne Queen’s oral history and even more about her from reading the oral histories of the people that she loved. Queen was a director of the Campus Y during the 1960s and ’70s.

She would ask, “What is your name?” then, “Where are you from?” And, when she was talking to you, she would grab you arm and look straight into your eyes. She expected the best in people and worked in the trenches to bringing people together during a difficult time. She fostered a sense of community integral to the Campus Y.

The power and potency of community combating issues of social injustice has been discussed as a solution to inaction. It is amazing how much can be done when people gather together, as they did then and we do now.

After the devastating 7.0 magnitude earthquake in Haiti, co-chair Alex Loizas and the Extended Disaster Relief committee orchestrated a planning meetings. Ideas came from every mouth in the room. The Anne Queen Lounge was packed as EDR worked to increase awareness of how to help in smart and constructive ways.

Learning about and meeting alumni at our 150th anniversary celebration, students desired chances to talk to alums about the work they accomplished both as students and since university. We re-instituted alumni-dinner discussions this year, and I expect these talks will result in increased and improved programming. The power of relationships was articulated more eloquently by Thomas Owens.

Owens, an incredible writer for Talking Sidewalks, Homelessness Outreach Poverty Eradication (HOPE)’s literary magazine wrote his journey and the friends, the trees, who were a wake up call for him. He said he was able to move into a nice apartment and have sustainable finances because of the programs of HOPE.

I could go on for days about the opportunities that come by way. There’s just not enough room. The best thing that could ever have happened to me was these three trees. It’s not all about the money. It’s all about the relationships.[1]

Individuals in the Campus Y and the conversations I were influential to me as well. This year, we also realized that we needed to be a place for disagreement and a forum for more diverse viewpoints than that of those involved in the Campus Y.

One initiative specifically focused on fostering diverse discourse is called Three Cups of Tea, an initiative of over 12 of UNC student organizations in an effort to promote community dialogue. The student groups vary in partisan, religious affiliation and general outlook. This event was inspired by three people: Elie Wiesel, Greg Mortenson and Anne Queen.

In a recent visit to campus, Elie Weisel said that “your generation needs to work together better.” He also said, “You get everyone in the same room talking.” We thought we could do that. Greg Mortenson, another recent speaker at UNC, tells us that in Pakistan it takes “three cups of tea” to do business: “The first cup, you’re a stranger; the second cup you become a friend; the third cup, you’re family.” Finally the third inspiration was learning about Anne Queen’s Wednesday afternoon teas with students and faculty hosted at her house nearly every Wednesday. More gets done when you bring people together, and build relationships. The Three Cups of Tea Community Dialogue is growing, evolving, far from perfect and good practice.

Leaving for spring break on the last day of my tenure, I slowed on Cameron Avenue to pass that pink building. For me, the Campus Y was a home where I have met some of my closest friends. It offered an opportunity to talk with incredible alumni and mentors. Those friends and mentors taught me how to be a pragmatic idealist, to think creatively as I seek to address complex issues. I feel so blessed to have found them.

Elizabeth McCain, a rising senior history major and creative writing minor, hopes to continue social justice work throughout her senior year. She is interested in graduate school in public health.