Big Fish (This Is Not A Tall Tale) 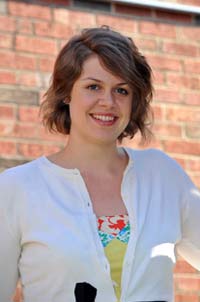 “Do you want to have a weird meta-experience?”

My roommate and I are sitting in Daniel Wallace’s kitchen. He was her professor last year and had hired her to house sit and watch the dogs while he and his wife were away. I’d come over to have a swim. Our hair is drying stringy from the chlorine and we’re just hanging out, sipping Hansen’s, a little awkward in the unfamiliar quiet of someone else’s house, when she says:

“Do you want to have a weird meta-experience?”

Wondering where this was going to fall on the scale of college experimentation, I say: “I think so.”

She raises an eyebrow at me, conspiratorial. “You want to watch Big Fish in Daniel Wallace’s living room?”

I decided to transfer to UNC when I was a sophomore at UC Santa Cruz, where I was living by the ocean and dividing my time between working at the Farmers’ Market and getting lost in the woods. I had just discovered Dorothy Parker and had decided that I would like to be a writer when I grew up — the reincarnation of Ms. Parker, if that was at all possible — pithy and worldly and adept at making cutting remarks to celebrities in public. In pursuit of this dream, I signed up for a creative writing class. The bulk of the reason I dropped UCSC cold, and moved as far away as mathematically possible, rests on one of my classmate’s stories (if you’re reading this, I owe you one). It was a sincere work about deer on the Santa Cruz campus that take bloody revenge on students who litter. There I sat, in workshop — that socialist circle configuration — reeling as my classmates praised this work of genius. Murder? Nature? The empowerment of the oppressed? Let’s send it to Harper’s! I kicked my desk over and ran.

It was in search of a different kind of literary environment that I threw my lot in with UNC. I knew absolutely no one in the state and had no context for choosing UNC other than a gut feeling and some vague knowledge about the journalism school. Also, I knew they liked basketball and I like tall men. And from that first day of orientation, wading through the August humidity to slide my writing portfolio under the gatekeeper’s door, my blind faith in Carolina has been rewarded. That year I took fiction from Lawrence Naumoff and Marianne Gingher, two sides of the pedagogical coin. I would liken the experience to blacksmithing — not being the blacksmith, of course, but the piece of metal taking turns in the fire and under the hammer. By some miracle, Algonquin Books took me on as their blog intern that January, a job that’s offered every opportunity to learn, not just the publishing industry, but what it is to live within a literary community — a colorful network of passionate authors, publishers, booksellers and critics. This year, I was accepted into the Honors Thesis program, where, with the masterful guidance of Pam Durban, I get to read and write and mingle with glamorous authors, spending my days in a mode of bourgeois artistic pursuit only enjoyed by Austen characters. I get to do things like workshop short stories with Amy Hempel and watch Big Fish in Daniel Wallace’s living room.

Every time I pause long enough to marvel at my unbelievable luck, I remember that question. “Do you want to have a weird meta-experience?” Yes. Always. The answer should always be yes.

Susannah Long ’11, an English major with a minor in creative writing, is from Walnut Creek, Calif. She plans to pursue a career in publishing.