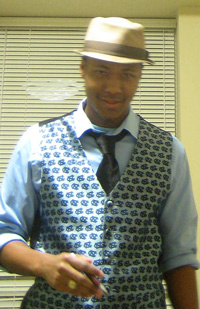 Before I transferred to Chapel Hill I attended an all boys school, Morehouse College. At Morehouse you didn’t have “girl friends” only girlfriends. So, if you were seen hanging out with a girl it was assumed you were trying to get with her. When I transferred I didn’t really know what I was getting myself into or what to expect. I knew I was going to a co-ed university, be taking a maymester, and heard it Chapel Thrill was like being in a college movie. My first introduction to Carolina Girls was in high school, but I didn’t really pay attention to them then. They were students who came to class ready to work, involved in every service organization, could and would talk about topics other than their spring break plans, and just genuinely nice — the people you knew you were going to something fantastic — the kind of your girls you could watch zombie movies and sports with. But at Providence excellence was standard so I didn’t grasp just how awesome these girls were until I got to campus.

I’m not sure what day I got my acceptance letter, but I will always remember the day I was introduced to Carolina Women. At Spelman, the all-girls’ school next door to Morehouse, I was known as “Crazy Carolina.” On Game Day, Carolina is all I could talk about: feverishly, I spew everything I heard on SportsCenter to anybody willing to listen; and game time you knew not to call me asking for a ride or anything that unglue from the TV. But people in Georgia don’t get that when Carolina plays Duke in the state of North Carolina it’s a national holiday and day of war. This is the one day where you have to be with people who understand what a house divided means. When I got to the Atlanta Carolina Club viewing party, I was astounded not by how many people were there, but how many women were there. Here were girls not only watching sporting events but cheering. My first introduction to how wonderful Carolina Women are was when Danny Green tea-bagged Greg Paulus and the woman next to me erupted in elation that is yet to be duplicated. This woman was cheering twice as hard than the most loyal fans — I was sold!

When I got to campus the awesomeness just continued. My first class at Chapel Hill was in Dey. I remembered being outside the building asking this gorgeous sorority girl where room 202 and where Day Hall was. Not only did she lead me to our classroom, she gave some insights about our professor and pointed to other resources I needed to aware of as UNC student. I have never called my mother and said I met someone until that day. She was the sorority girl my mom had told me about growing up: a pearl in every way!

While in college, I started attending Mass more. At the Newman Center I met some of the pious and faithful people since the apostles. The women there if given the chance would run the covenant. There are few times when a man literally stops and thanks God after meeting somebody. I had one of these grace moments on the P2P. This girl next to me was absolutely beautiful, with rebellious edge, interviews with Duke and Harvard med school and Catholic — she was the kind of woman your father expects you to marry and the girl you have to bring home to mom.

The thing that makes Carolina Girls best in the world is not how loyal they are to their teams, or how classy they are, or even how smart they are. It is the ebullience and alacrity that they put into everything they do — Carolina Girls attack life! You know they are going to change the world and if need be will go through you to do it. Their enthusiasm and determination forces you to step up your game. I think this sums my love for The University of North Carolina and the effect its students have had on me.

If I am lucky enough to have a daughter I hope she graduates from Chapel Hill.

B.A. Gibbs ’10 of Matthews majored in comparative literature with a minor in cinema. He plans to write more and then go back to school.