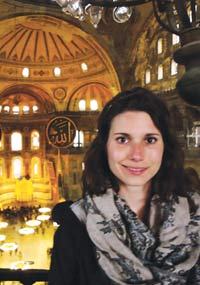 People often ask me about India. “How was it?” they prod. “Did you just love the food?”

For someone who loves to talk as much as I do, my response never fails to be brief. Hot. Amazing. Exciting. Hot. If this particular person’s voice is brimming with enthusiasm, as happens more than one would expect at Carolina, I may even take the liberty of a whole sentence. Just the thought of a mango smoothie from Jal-jog Chouraha makes me salivate.

It’s not that I do not want to talk about the nine weeks I spent volunteering in India — far from it. But I learned after my first few encounters stateside that to explain my experience would take more time than either party had and might even be beyond the limits that language imposes upon us. To say that Rajasthan in the middle of the summer is hot is an understatement; but could anyone ever understand what it feels like to walk through the desert in 120-degree heat in pants, to sweat so much you develop a rash, to watch your lone ceiling fan drift to a halt after the power goes out yet again and know that you won’t sleep again until it’s whirring happily overhead, to fall prone to spontaneous nose bleeds brought on by the dry air?

Some experiences cannot be described, but must be borne.

If I were to attempt to say what India did for me — what that summer changed in me indelibly, what marks all the small moments and eddies of that experience left on the bare sand of my life — I might describe my first field visit to a mining community near Kota. I might talk about the interview I conducted with a woman, or I should say girl, named Kamla. I might attempt to explain how my life changed then and there without warning, without a thunderclap, without me even realizing it. Or I might write a poem.

The walls flake with cerulean paint

and arch into a ceiling crusted with lavender,

yet the room exhales moisture, not unlike

the damp snorts of cattle. The air wears its heat

with child and lumbering. But the weight

of the silence is more urgent — curiosity

propagating in waves from a horde

of brown eyes, all hovering in the door

frame in a cacophony of worn clothing.

The children block out the sunlight,

throwing a shadow across the patched rug

and the plastic cups and the battered iron

pot and the expanse of dirt. The shadow shifts;

sometimes a head in profile stands out, sometimes

the protrusion of an elbow or the swell,

Before brown skin and a shadow the brown

of cardamom cast on a brown floor, the red

at the heart of a pomegranate.

Her name is Kamla, she’s fourteen —

or was it fifteen? She could not remember

— and I think she is the most beautiful girl

that I have ever seen. But no, it was more

that she drew eyes like the smell of chai

steaming on the roadside at dawn, seduced

the door of the movie theatre as it swings shut.

Or she was no more beautiful than any girl

deep and hollow beneath the desert crust.

In the interview, Kamla sipped Fanta

from the crinkled cup before starting

to tell us, in that room lost to a dream

of lavender but resonating with brown,

beneath a ceiling drooping with heat,

surrounded by children who could not be

children but already worked in the mines,

told us — she smelts iron every day,

in a saree like a pomegranate and bare feet,

for less money than a cup of coffee.

She married a boy she had never met

when she turned thirteen. She started work

at ten. She lives with her boy-husband

beneath a tarp that wears the face

of the latest politician to promise change

in this place. She cannot read. Her eight

Her favorite colors are pink and green,

As I move past the jumble of brown

elbows and sandals and patched cloth,

through the mass of pots and plastic bottles

littering the courtyard, into the backseat

of the car that shepherded me to this settlement,

the children pose for photos and run

in circles with the chickens. I wave goodbye

through the window. In the pane, I watch

the blossoms of sarees swaying, catch

the burst of my reflection, and through it, Kamla

with her son hoisted on her hip. I avoid

her eyes, round and turbulent and brown.

Sitting across from Kamla on that patchwork rug with my plastic cup of Fanta, the surrealism of the moment struck me like a wave of relentless desert heat. For this brief 45-minute interlude, the two separate spheres of our lives had passed through one another’s; these two worlds that could not be farther apart had brushed for an instant in a room with cerulean walls and a lavender ceiling, beside a portable cook stove, within earshot of the sandstone quarries. And, as I smiled and passed Kamla the carabiner hanging off my water bottle for her son to play with, I realized that the only thing that separates those two worlds — that puts me in the place of a well-off, educated, independent student and her in the place of an illiterate, malnourished, underage mother — is chance.

Some experiences cannot be described, but must be borne.

Sarah Bufkin, a rising junior, is a history major with a minor in creative writing. She is originally from Atlanta. After graduation she hopes to continue to write and to attend graduate school.