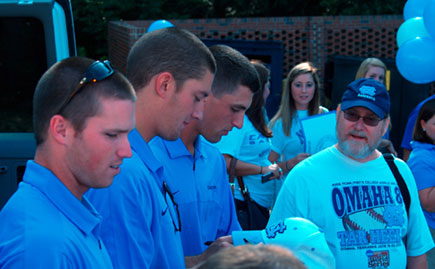 Despite Bumps on Road to Omaha, Tar Heels Feel Good About Title Chances

The North Carolina Tar Heels might be ranked No. 1, but it hasn’t been an easy road to Omaha for the NCAA College World Series on or off the diamond.

With about 100 fans cheering as the Heels departed Boshamer Stadium, the extra-long charter bus carrying the Heels to the airport had a hard time maneuvering its way out of the parking lot, going back and forth several times banging into vegetation on the back end and banging its mirror on a brick wall on the front end.

UNC coach Mike Fox could be seen laughing inside the bus. He must have been thinking that nothing comes easy.

This is the sixth time in eight years that Carolina has made it to the World Series, but it might have been the toughest road of them all. 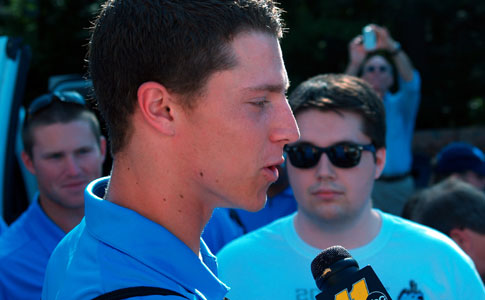 “It may have looked easy getting to Omaha in previous years, but we didn’t see it as that,” Fox said before boarding the bus. “It looked really hard this year because of the extra innings and long games. This team has obviously been through just about every possible scenario with delayed games, late games, extra-inning games, tough games, so we’ll see how all that plays out.”

Freshman sensation Skye Bolt, between signing autographs and posing with fans for pictures, said he and the team are ready.

Fox said it never gets old going out to Omaha in part because of seeing the look on the faces of his young players.

“They are thrilled to death,” he said. “I like to keep my eyes on the freshmen, our new guys, who haven’t been here before. It’s like Christmas and Disneyland.”

But Bolt said that while the team has enjoyed protecting its No. 1 ranking this year, there’s still a lot of work to do. “It’s not something we can boast about – we’ve still got games to play, and honestly we haven’t earned it yet,” he said.

Despite six of the Tar Heels’ 10 losses coming in the last month of the season, including two regional losses that put Carolina on the brink on elimination, Bolt said the Tar Heels (57-10) begin play in Omaha with the feeling that they can’t be beat.

“Every team has its highs and lows,” he said. “The baseball we played at the beginning of the year was beyond exceptional. It’s very hard to play baseball like that for four or five games, much less 30-some games. We were really fortunate.”

Bolt said the Tar Heels will get back to that early and mid-season form by playing good, solid defense, getting good pitching and getting the bats going a little better. “We’re going to continue to play our game of defense and pitching, but if the bats peak like we’re hoping, then it’s no question we’re going to be rolling through Omaha,” he said.

“Our seniors wanted to go back one more time and give it another shot,” he said. “The mood right now is ‘let’s win the school’s first championship.’ You get that vibe from everybody in the locker room.”

To do that, though, the Tar Heels will have to get by rival N.C. State, which made the World Series for the first time since 1968. The two teams, who played an epic 18-inning battle in the ACC tournament that the Heels won, face each other Sunday at 3 p.m. in Omaha.

Regardless of the opponent, Fox said the first game is important. “It’s vital,” he said. “You’re playing essentially a four-team, double-elimination tournament like a regional. If you lose that first one, you’ve got a tough road.”

The eight teams are divided into two groups of four, with one winner coming from one bracket and one from the other and the two final teams playing a three-game series.

One of those teams in Carolina’s bracket is traditional powerhouse LSU.

“Everybody will be gunnin’ for us,” said Angie Cooper ’95 of Mebane, who came to see the team off. “I know LSU was harping that they should have been No. 1, so they’ll have us in their sights. But having watched the Tar Heels all year, they really deserved it.”

Cooper’s 6-year-old son, Will, got to speak to his hero Cody Stubbs for the first time minutes before the Heels left for Omaha.

“I told him I liked his batting song – the one they play when he’s batting,” said Will, who is going to the UNC baseball camp in a couple of weeks. “It’s ‘Thank God I’m a Country Boy.’ My mom has that song on her iPod.”

Will met Fox three years ago and promptly asked Santa Claus for season tickets to the UNC baseball games. “We’ve been coming to games ever since,” his mother said.

Fox said he doesn’t like all the TV cameras and microphones, but he liked the sendoff the Carolina fans had for his squad. “I like people being excited about our program,” he said. “I like our players being excited. This is beyond excitement.”