Flanagan Runs With Leaders for Much of the Olympic Marathon 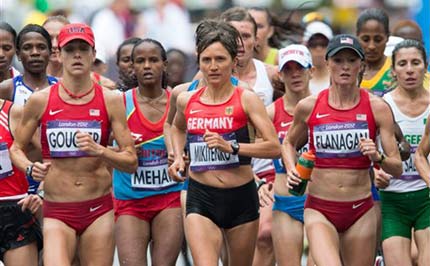 Flanagan Runs With Leaders for Much of the Olympic Marathon

Former Tar Heel runner Shalane Flanagan ’05 stayed at the top of the pack of the women’s Olympic marathon for more than an hour and a half. But, despite her finishing time being only 13 seconds off her personal best on a slow and rainy course, Flanagan dropped back over the last third of the race and finished 10th, 2 minutes and 44 seconds behind the winner, Tiki Gelana of Ethiopia.

Gelana, while well off the world record, set an Olympic record at two hours, 23 minutes and 31 seconds.

Flanagan’s U.S. teammate and training partner, Kara Goucher, finished 11th, a half a minute behind her.

Two Ethiopians and three Kenyans, usually among the marathon elite, broke out front for the last 50 minutes. Russian Petrova Arkhipova passed Flanagan and joined the lead back an hour and 50 minutes in and finished in third place behind Kenyan Priscah Jeptoo.

With her blonde hair, bright red two-piece racing suit, neon green shoes and dark blue hat with the American flag on it, Flanagan stood out in front at the beginning and through most of the first 90 minutes as the runners started at Buckingham Palace, raced around Trafalgar Square and past Big Ben, Westminster Abbey and the Tower of London.

It was an unusually complicated course with few hills but lots of twists and turns where trailing runners were blinded from the lead runners. The race had more than 90 turns, including four U-turns.

About 17 minutes in, a large group, led by Flanagan and others broke away. With the Africans laying back, Flanagan led after 25 minutes. The lead pack was down to 40 to 50 women after a half hour. When retrieving water, many of the women took a few swigs and tossed the bottle away, but Flanagan tended to take smaller sips and run with the bottle longer.

Flanagan stayed in the top five as the lead pack dwindled to 30 runners 40 minutes into the race. After first 55 minutes, while the lead pack had gotten even smaller, Flanagan dropped back a tad to ninth.

But Flanagan and the rest of the field got a boost when a favored Russian, Liliya Shobukhova, dropped back after about an hour and 10 minutes and then dropped out with a hamstring injury.

There were 20 in the lead pack after an hour and 20 minutes, with three Kenyans, two Ethiopians and two Americans among them.

Shortly thereafter the Kenyans and Ethiopians separated themselves from the pack and Flanagan struggled to stay within striking distance. With eight miles left, Flanagan’s hat was off and she was 10 to 12 seconds behind the lead pack.

Running on her own, her rhythm changed slightly and she had a harder time maintaining a good tempo. Running seventh at the 2-hour mark, Flanagan was effectively out of the medal race.

However, known for her speed, Flanagan wasn’t through yet. Amazingly, she passed one of the Ethiopians for sixth place and then one of the Kenyans for fifth.

But then she faded and was totally spent by the time she crossed the finish line, dropping down onto her hands and knees. Despite finishing ahead of her teammate, Flanagan needed help from Goucher to get up off the street. “That’s giving 101 percent, unable to stand,” said NBC analyst Tim Hutchings.

NBC analyst and former runner Craig Masback added, “Flanagan’s time is only a little bit off her personal best, so considering that this course was not fast, that is an achievement in itself.”

Flanagan achieved her personal best of 2:25:38 at the Olympic trials in better conditions and on a faster course. She finished the Olympics at 2:25:51.

Flanagan qualified to run in the 10,000 meters in the Olympics (she won the bronze in that event four years ago) but gave up that spot to focus on winning the marathon.

The next chance for a medal by a UNC alumna comes Wednesday when Alice Schmidt ’04 will compete in the women’s 800-meter event.