Holden Thorp Photoshoot – Behind the Scenes 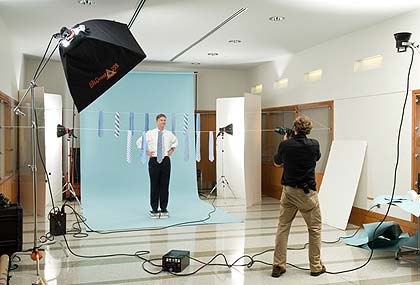 The July/August 2008 issue of the Review featured Carolina's new chancellor, Holden Thorp '86, on the cover and inside.  Shortly after the announcement of his selection, an anecdote surfaced about Thorp purchasing several Carolina blue ties.  The anecdote was featured in the story and writer David Brown '75 and Art Director Kate Anthony collaborated on working the ties into a photo shoot.  Photographer Steve Exum '92, pictured above shooting Thorp, took the idea and ran with it in a studio he set up in Gerard Hall.