What Did Those Handbooks Say, Anyway?

Through the mid-1950s, the Carolina general student handbook was a man’s world — there was barely a mention of women in the days before they were fully integrated into the student body (except a list of places to take them on dates, and where their dorms were located), although female students had been on the campus since 1897. 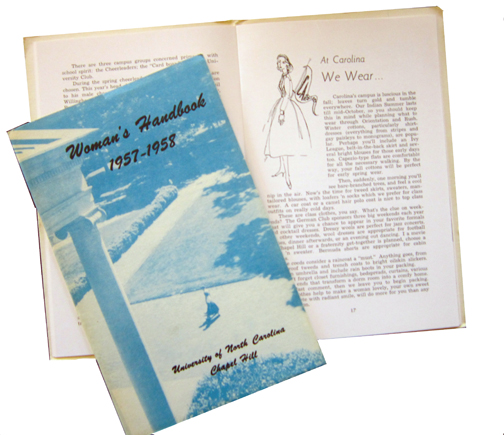 The library has a women’s handbook from as early as 1931, but it contains only the barest information beyond the academic calendar, and no detailed rules. The handbook publishers in 1940 believed a single sentence on conduct was sufficient: “The Campus Code is merely this: the Carolina woman student conducts herself at all times as a lady.”

The woman of the late 1940s apparently had to have everything spelled out. For the better part of 20 years the language about the rules was fairly consistent; a subtle loosening of at least the semantics had crept in by 1961, leading inevitably to this line, written by a graduate counselor in the 1960-70 book: “It’s the Age of Aquarius and you’d better be prepared to pour libations as well as soak up the educational advantages that await you … College is a ‘Happening’.”

Following is some of what awaited the Carolina woman at orientation, and stayed with her until graduation … or suspension.

1947   Any girl leaving a dance intent on coming back to it has to have a chaperone with her while she’s gone.

1948   “Closing hours,” in other words curfews: 11 p.m. Monday-Thursday; 1 a.m. Friday and Saturday, midnight Sunday. These were in place, with some modifications for upperclassmen and those with special parental permission, well into the 1960s.

Non-UNC dates can stay at places like the Carolina Inn, but state law requires the woman to pay for it. “The Carolina Inn also rules that they must observe coed hours; otherwise, their schools or parents receive letters of ill-repute from the Dean of Women.”

All undergraduate women must live in a dorm or sorority house. Exception can be made only by Dean of Women Katherine Carmichael. It is she who makes dorm room assignments.

On the closing hours: “If late, a girl is to report herself to the house president. She will be brought before the House Council and punished accordingly.” Examples: One night’s probation (8 p.m. to 5 a.m. house arrest) for the first 10 minutes late, and another for each 10 minutes after.

“There shall not be talking out of windows to boys.”

To spend night out, the hostess must get the house mother to invite.

Out of town? Not without a letter from parent to Carmichael. Weekend out? You must fill out a “weekend slip.”

No going in men’s rooms. You can go to a fraternity house only with strict obedience to the Interfraternity Agreement drawn up each fall. Carmichael can throw a blanket ban on a house that hasn’t lived up to the agreement.

Interestingly, no dress code is mentioned at this point. But includes dress suggestions, and pants are not mentioned.

All that, while harsh, is understandable.

This, on the other hand: “If a girl receives a telephone call, it is up to her to see that the next ring is answered. Failure to comply will be penalized.” This pertaining to common hall phones, and somewhat pre-personalized ring tones, one wonders, how did the girl know it was for her?

1954   A woman can visit a man’s apartment only if a minimum three couples are present.

If kicked out of school you’ve got 48 hours to be gone.

A kind of dress code is presented as a true-false quiz:
7. Bermuda shorts rather than skirts and sweaters are classroom favorites. FALSE
11. Sunback dresses are not worn to class. TRUE

1956   First inclusion of Katherine Carmichael with UNC’s top administrators, 10 years after she became dean of women.

1961   There seems to be a little letup on visiting social rooms in men’s dorms. The term “a campus” is in now — enough violations and you get “a campus,” a night of house arrest.

The handbooks’s funding was taken away in 1962, and it wasn’t published again until…

1969   This one seems to be going out of its way to play down the image of the dean’s office. There are still house mothers in the dorms, called “liaison” between students and Carmichael. “Contrary to popular opinion, the administrators in the Dean of Women’s office are not opposed to free-thinkers. You will be faced with decisions within the coming year that may mold an image which you will carry for the next few years. Before you act spontaneously, weigh the consequences.”

There’s a photo of a male and a female student sitting on a bed studying. This is puzzling, given that open visitation still is being debated.

“Self-limiting” hours are now in effect for juniors and seniors not currently under disciplinary penalty. You still must sign out and in if you don’t have a parental waiver.

For freshmen and those without self-limiting hours, curfew is midnight Sunday-Thursday, 1 a.m. Friday and Saturday.

You have to live in a dorm or sorority house unless you’re 21 and have parental permission.

Men are allowed in women’s social rooms after 8 a.m.

You still must sign out and in for weekends away, and have parental permission.

No dress code is mentioned.

Back to previous page.