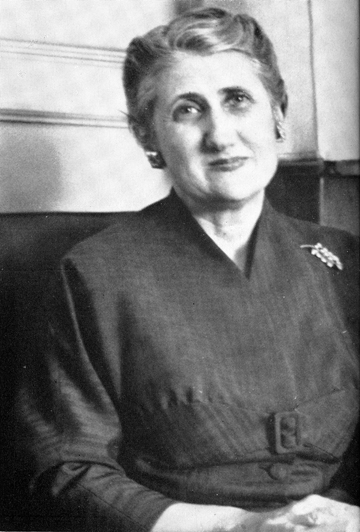 While she was in the Philippines in the early 1950s, Kitty Carmichael received only the second page of a telegram about a fire in her apartment, and the details of the damage to her property were obviously on the first page. The telegram came from the campus, possibly from classics Professor J.P. Harland, her partner in practical joke crime.

Carmichael could dish it out, too.

Tom Lambeth ’57 recalls attending a birthday party in Carmichael’s apartment for Allard Lowenstein ’49, a student political activist and later a member of Congress. Carmichael handed Lowenstein a fake knife made of soft rubber to cut his cake, forcing him to try to hide his discovery that the cake was so hard he couldn’t cut it.

Carmichael was a prolific letter writer, with a dignified style and a dry humor.

In a February 1946 letter to the chair of the scrapbook committee of her college sorosity, she wrote:

“I am flattered that you ask for a biographical sketch. There is not a great deal to tell: I was born, of course. That event took place some 33 yrs ago (though these matters ought not to be discussed, ought they?)

“I ought to have some hobbies — well-integrated people, I am told, do. Let me see: I am too old for tennis, I have never learned golf. I thought I’d like to enjoy horses — but since I fell and broke an ankle, I haven’t been as enthusiastic about horses. I like to climb mountains, provided that they aren’t great big mountains — I’m really not at all he-manish. I like to read.”

She wrote that she liked to cook but, “I don’t have a stove.

“I adore being taken out to dinner by handsome men.”

“If ever you wish to speak to me I trust you will walk in boldly. Do not come in apologetically, saying ‘she is too busy for me.’ Instead say: ‘The state of North Carolina pays the old girl a salary to see me. And today I shall help her earn her salary.”

On the Women’s Movement

“I don’t feel that it has been my job to lead crusades. If others want to do that, that’s fine, but that’s not for me.

“I believe that above all, one should keep in mind what the end of man is. To me, that end is to glorify God. I don’t believe that I could accomplish that end by kicking the traces.

“The women’s movement is very important to me, but I haven’t gone around with a chip on my shoulder because I’m a woman, nor have I considered my sex to be a major handicap to me.”

Is the Woman’s College Better?

Carmichael seemed conflicted with the concept of coeducation for women. In “Why Your Daughter Wants Coeducation,” written and submitted to The New York Times (date uncertain), she promotes the value of education for women but isn’t so sure about the company of men:

“Nonetheless, I see certain valid objections to coeducation. Some months ago I had a discussion with Professor Reuben Hill, the marriage and family expert, formerly of my own campus, now of the faculty of the University of Minnesota. While we both are believers in coeducation, we agreed that in an asexual environment, students knuckled down to a more disciplined program than they do in a coeducational college, where male-female interests distract them from their fundamental academic interest. For another thing, in a coeducational college a young woman does not receive the same benefits in training in the social amenities, manners and customs, and good breeding that she would receive in a woman’s college. Then, too, I often wonder why parents show complete faith, instead of a rather well-founded skepticism, concerning coeducation.

“If I were a parent, I would ponder concerning my daughter’s judgment in selecting men friends when first she is away from home, and in exercising self-control when other young persons are drinking. I know the sweetness of popularity, and the pressures of social groups. True, I could console myself with statistics which indicate that college women are not sexually promiscuous, and drink considerably less than the public as a whole. But while young men are permitted to sow a few wild oats, society still views seriously a young woman’s aberration from established sexual mores.”

Where To Live — Advise Please

While she was in the Philippines in 1952, Carmichael was notified that the rent at her Carolina Inn apartment was going up prohibitively. She wrote to someone in South Building:

“Psychologically — and financially — I am not equal to a house of my own. And I do not want to live in Glen Lennox; it is too far from the student world. Of course, if you and Mr. House think I should live at Glen Lennox, it will be Glen Lennox. But my personal reaction is that Glen Lennox is a mistake, if one is to perform effectively as a dean of women. I have had too many midnight calls.”

When she returned, she moved into Graham Court, two blocks from the campus.

To freshmen women, on the question of whether they’d become anonymous numbers at Carolina: “I believe that you can find persons interested in your welfare as an important indication; for this University prizes individual worth.”

On the feelings of youth and their place in society: “We want our freedom (without meditating on the fundamental nature of liberty). We want a sane society (yet a do-as-you-please philosophy). We want a world without hypocrisy — yet we want sentiment, and we want the hypocrisy that ALL men can be trusted. … Rebellion is easy — genuine reform is difficult.”

In a 1973 interview: “It is a regrettable thing that society seems to lack a common denominator now. At one time it was Shakespeare and the Bible. Now many people have nothing.”

On the negotiations to change male-female visitation rules: “I often wonder how we got anything done in those days except work on visitation.”

On receiving an award: “For a quarter of a century now I have participated in the Chi Omega North Carolina Distinguished Service Award for Women; but it has been as a pensioner who has to pick up the crumbs from the table. Now as Vice Chairman Hunt has said, I have been dismissed from the Selection Committee, and in consequence the Committee has seen fit to grant me the Distinguished Service Award.”

Back to previous page.