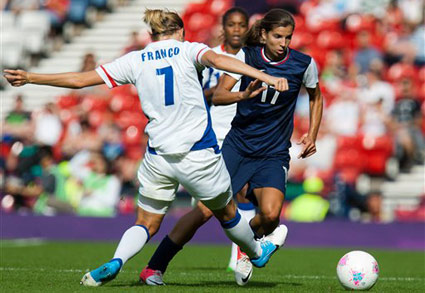 After not playing in the Olympics first round, U.S. soccer star Heather O’Reilly ’09 got the start against Colombia on Saturday. She left in the 66th minute with not much to show for it, though the U.S. was ahead 1-0.

After fellow former Tar Heel Tobin Heath ’10 came in to take her place, the U.S. team scored two goals to salt away a 3-0 victory and ensure a spot in the quarterfinals. Heath footed a seeing-eye lead pass to Abby Wambach, who scored to give the Americans a 2-0 advantage with 15 minutes left.

A couple of minutes later, a goal by Carli Lloyd wrapped up the win.

Midfielder Shannon Boxx’s hamstring injury helped give O’Reilly an opportunity to play despite the fact that she has lost her starting position to Heath and Megan Rapinoe.

Former U.S. player Brandi Chastain, now an analyst for NBC sports, said that O’Reilly didn’t play terribly but her effort wasn’t the quality that the U.S. coaches are looking for.

“It was not her best game,” Chastain said.

O’Reilly got a good lead pass from Wambach early in the game but she didn’t take her time to play the ball across the field and instead got off a lackluster kick on a good scoring opportunity. She had one shot on goal blocked almost immediately. She committed a foul, had the ball stolen from her and was beaten to other balls. All in all it was a rusty performance after not playing for a couple of weeks.

Chastain still contends that the veteran O’Reilly, who has played in three Olympics and been on the national team since she was 17 years old, is still important to the team despite losing her starting position and having a rough outing.

“It’s difficult to adjust to not being a starter,” Chastain said from her own experience. “But what Heather is great at is that she recognizes this is a team sport. She’s one cog in the wheel and she understands she has a role. And she’s willing to fulfill that role.”

O’Reilly won’t be giving up her playing time easily, Chastain said. “She comes to training to work hard and get better,” she said. “I love Heather O’Reilly because she is as passionate and emotional as she is hard working.”