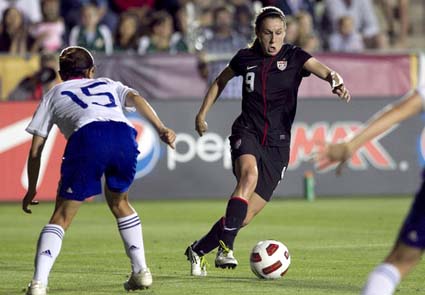 Abby Wambach moved within 17 goals of the United States women’s soccer scoring record held by Tar Heel Mia Hamm ’94,  with a first-half goal that proved to be all the Americans needed in a 1-0 win over a physical North Korean team.

The win in a steady rain assures the U.S. of a first-place finish in pool play, which matches the Americans up with weaker teams in the next round.

North Korea has already been involved in controversy when the team refused to take the field against South Korea for more than an hour because a graphic on the scoreboard accidently showed a South Korean flag associated with a North Korean player. The team has also been kicked out of the 2015 World Cup for having five players tested positive for steroids. In this game, the North Koreans roughed up the Americans, picking up four yellow cards, with one resulting in a red-card ejection.

Heather O’Reilly ’09, starting her second game in a row, didn’t back off. The NBC announcers praised her for her blue-collar attitude, saying it was a coach’s dream to have a player with that kind of work ethic.

While O’Reilly got a deflection shot off that went just wide as she took a knee to the head, it was her defense up and down the sideline that proved her worth. While the U.S. offense dominated the first half, the North Koreans got several scoring chances in the second half. O’Reilly thwarted one of those opportunities when she seemingly came charging out of nowhere from a long way back to punch the ball away.

O’Reilly and fellow Tar Heel Tobin Heath ’10 played on the field at the same time for the first time in the Olympics, as Heath got a second-half start in place of Kelly Rapino (whose favorite Olympian of all time, by the way, is Michael Jordan ’86).

Heath got a good look at the goal in the 49th minute, when she rushed the goal from the left side, but popped the ball just over the net. Her biggest challenge of the day might have come four minutes later when her shoe came off and she struggled to get it back on in a hurry. Play doesn’t stop for such things in soccer.

Heath or O’Reilly has been on the field during an opponents’ 256-minute scoreless streak. France scored twice in the first minutes of the opening game but the Americans haven’t allowed a goal since.

The U.S. is known as an aggressive team that always wants to score, but for much of the last 15 minutes the Americans seemed to run a sort of Dean Smith Four Corners as they worked the ball around killing precious time.

On a side note: former Tar Heel women’s soccer player Cat Whitehill ’04, a gold medal winner herself, did an admirable job as an NBC analyst before the game and at halftime. She has a very likeable nature and good, fluid insight.