Scholarly Pursuits: A Senior's Adventures in Academia
Meagan Racey is a journalism and mass communication major from Whispering Pines. 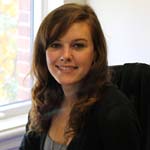 Let me tell you one of my dreaded embarrassing moments.

I'm at an event, say, a wedding reception, mingling with new friends. Then the music comes on. Everyone rushes to the dance floor as if they've been rehearsing daily like one of those random musical scenes in a TV show.

I'm left behind. Stuck on the wall because I don't know what to do on the dance floor.  And I have no date to comfort me.

I took the opportunity this semester to change that nightmare. Dance lessons can accumulate to hundreds of dollars, so why not take advantage of my tuition at Carolina?

For the first time in my college career, I signed up for a class completely unrelated to my majors and not under general education requirements: Beginning Social Dance with Sunny Yu. Sure, college is all about preparing you for your career. But it's also a place to learn other skills that will boost your journey.

I must admit that I love the class – and even convinced my boyfriend to take it too. Now I don't have to worry about that date issue. We meet twice a week for an hour and usually practice steps for two dances a class. We learned the basic steps for the waltz, cha-cha, rumba, fox trot, swing and tango. Then we added turns, breaks, and alternate steps and positions.

We begin each class by forming a large circle, as evenly boy-girl as possibly (you know that's difficult in general and even more difficult with Carolina's gender ratio). Sunny reviews steps and teaches us a new one, which we practice in pairs – still in the circle formation.

We must look somewhat ridiculous – stepping all over each other's toes in front of all the studious people outside our room in the Student Union. It's even better when the time for partner switching comes, and it's my turn to dance alone because there aren't enough guys. At least I'm more comfortable screwing up in front of a lot of people.

Anyhow, I feel a little better about that nightmare. But I still have two more hurdles: remembering the steps and finding the courage to do it in front of experienced dancers.

People pick up the paper, turn on the news and scroll news sites to quench their curiosity. People use the news.

But what does media do to people?

My classmates and I are studying that question in "The Process and Effects of Media," taught by Sri Kalyanaraman.

We explore mass communication as a "social process," using information from journalism, social psychology, sociology, political science and history. We analyze how messages are constructed, disseminated and received by audiences.

Now, when I see a commercial (ah hmm, such as Wendy's ad for the Bacon Deluxe), I think twice.  There's the ‘Wow, I could really go for one of those,' but then I (sometimes) catch myself. Wendy's is telling me I'm hungry. But am I really?

Anyhow, here are some interesting findings from media effects studies:

Whenever a Virginia Tech football game is on, I can guarantee some sound effects coming from our game room. My dad can't resist yelling and cheering at the TV screen-"Go, go son! Go!" Sometimes it's not so good… "How on third and two would you hand it off? He's being an idiot."

People that watch enough TV (or use other media enough) begin to perceive that they have a relationship with certain characters or people on TV. They learn enough about those people inside the box. In Dad's case, it's an illusion that he is interacting with the players or coaches. They are talking to him or vice versa.

Observational learning: Are you a copy-cat?

The Bobo Doll experiments:  When children viewed videos of adults abusing a blow-up clown doll, the children imitated the adult behavior, hitting, kicking and punching the doll. Other children viewed a non-violent video and did not exhibit the aggressive behavior. These experiments reinforce observational learning, where a person learns by observing the actions of others and the consequences of those actions.

After viewing Jaws, people were more cautious when entering the water. After watching Psycho, people were scared about stepping into the shower. After Reese's Pieces appear as E.T.'s favorite candy, sales went up.

Mood management: What color is your mood ring?

What teenager hasn't stomped away from her parents, slammed her bedroom door and turned on her music? People use media to escape. And moods have an impact on what media people choose.

In 1968, Max McCombs and Don Shaw, then associate professors in the UNC School of Journalism and Mass Communication, conducted the first test of this agenda-setting function, which suggests that mass media influence their audiences by choosing what stories to write and which are the most important. McCombs and Shaw interviewed 100 Chapel Hill voters in the 1968 presidential election and found that voters voiced the same key issues that media content reflected. Hundreds of studies have been conducted since then, and Shaw has focused his recent study on how people choose and use media.

Cultivation: Is your neighborhood really like Desperate Housewives? How about Law and Order?

The theory of cultivation suggests that enough (long-term) exposure to television subtly "cultivates" viewers' perceptions of reality. To study this, George Gerbner placed TV viewers into three categories: light viewers, medium viewers and heavy viewers. He found that heavy viewers held beliefs and opinions similar to those portrayed on television rather than the real world. For heavy TV viewers in particular, reality begins to resemble the TV or media world.

Note: This information has been gathered from my lecture notes and powerpoints, as well as from the textbook Fundamentals of Media Effects by Jennings Bryant and Susan Thompson.