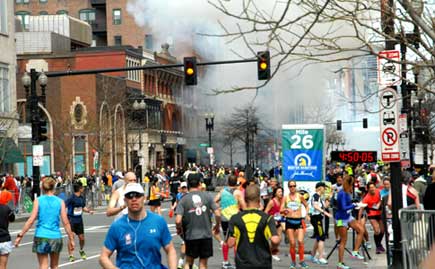 presented by the Carolina Center for the Study of the Middle East and Muslim Civilizations, the Center for Slavic, Eurasian & East European Studies and the General Alumni Association

The Boston Marathon bombing and its aftermath — the week that started with deadly explosions and ended with a manhunt — have left us with unanswered questions about home-grown terrorism, religious extremism, the pressures of the 24-hour news cycle and political struggles as far away as Chechnya. In the wake of these events, we wonder how normal young men become “radicalized,” how journalists can hold to their professional standards against competition from social media, and how we can create community in a time of violence and extremism.

Coclanis is Albert R. Newsome Distinguished Professor of history and director of UNC’s Global Research Institute. Coclanis is a fellow at the Carolina Population Center and has published widely in the fields of economic and demographic history. Originally from Chicago, Coclanis joined the History Department at UNC in 1984 after taking his Ph.D. from Columbia University. He has served as president of three leading historical organizations, and over the years he has held visiting posts at Columbia, Harvard and the National University of Singapore.

Birckhead is associate professor of law at UNC. Her research focuses on juvenile justice policy and reform, and criminal law and procedure. Birckhead practiced for 10 years as a public defender in the Massachusetts trial and appellate courts and in federal district court in Boston as an assistant federal public defender. She has defended clients in cases ranging from violent felony offenses in state court to acts of terrorism in federal court. Among her clients was Richard Reid, the attempted “Shoe Bomber” prosecuted in the First Circuit under the Patriot Act. Birckhead received her J.D. from Harvard.

McReynolds is professor of History.  She is interested in the development of mass communications and leisure-time activities, and how these helped to shape identities in the nineteenth century, leading up to the 1917 Bolshevik Revolution. She is currently engaged in a study of how attention to a selection of particularly sensational murders raised a number of related social and political questions. Her other interests include film history and theory, critical theory and cultures studies, and historiography.

Safi is associate professor of Islamic studies in the Department of Religious Studies. The co-chair for the Study of Islam Section of the American Academy of Religion, he focuses on progressive Islamic thought, social and intellectual history of pre-modern Islam and Islamic mysticism.  His most recent book is Memories of Muhammad: Why the Prophet Matters¸HarperOne.

Schanzer is associate professor of the practice for Public Policy at both UNC and Duke, and Director of the Triangle Center of Terrorism and Homeland Security, a research consortium between UNC, Duke and RTI International. In these capacities, he teaches courses on counterterrorism strategy, counterterrorism law and homeland security.  He also serves as the director for strategy and outreach for the Institute of Homeland Security Solutions, a North Carolina-based research consortium focused on applied social science research for homeland security.  Schanzer is the lead author of a widely cited National Institute of Justice study on domestic radicalization – “Anti-Terror Lessons of Muslim Americans” (2010) – and a report on “Improving Strategic Risk Management at the Department of Homeland Security,” published by the IBM Center for the Business of Government.  Prior to his academic appointments, Schanzer was the Democratic staff director for the House of Representatives Committee on Homeland Security from 2003 to 2005.