U.S. Beats Canada in Overtime to Earn Rematch With Japan for Gold Medal 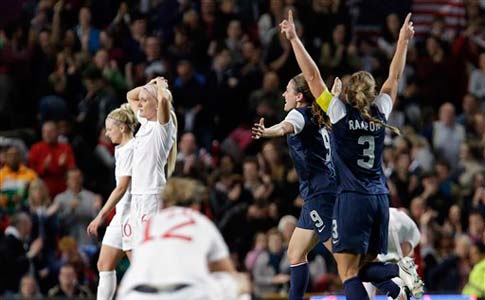 U.S. Beats Canada in Overtime to Earn Rematch With Japan for Gold Medal

An instant classic ended in overtime Monday when former Tar Heel Heather O’Reilly ’09 came in as a late substitution and banged a crossing pass to Alex Morgan, who headed it in from eight yards out over the goalkeeper to give the United States a 4-3 victory over Canada in Olympic women’s soccer.

“I was just thinking, get in the air and get a head on that,” Morgan said. “Heather is great with crosses. She is so good at getting down the end line and putting the cross in. I was just trying to get in the right position and it just so happened that I was.”

The dramatic ending starts the new drama of the U.S. team playing Japan in the gold medal match Thursday. The Americans fell to the Japanese last year in the World Cup in a stinging defeat for the U.S., which led and controlled that game most of the way.

No one controlled this back-and-front Olympic affair, which the Americans never led until the final goal. The U.S. had to come back three times as Canada ’s Christine Sinclair almost singlehandedly defeated the Americans.

First, Sinclair got between a trio of U.S. players and right-footed it past diving goalkeeper Hope Solo, who hadn’t been scored on in 368 minutes, to give the Canadians a 1-0 lead, where it stood at the half.

The United States and Canada have played 51 times, yet this was the first time since 2003 that Canada has even led in a game. They haven’t defeated the Americans since March 2001.

The Americans picked up the intensity in the second half. Another former Tar Heel player, Tobin Heath ’10, passed into the six-yard box to Morgan but Canada knocked it away. The U.S. was able to keep possession, however, and earned a corner kick. Megan Rapinoe, instead of playing it to a teammate, curved the kick into the near side bottom corner of the goal in the 53rd minute.

Canada’s Sinclair came right back in the 67th minute, heading in a passing shot from Melissa Tancredi to make it 2-1 Canada.

Heath and Morgan hooked up again in the 68th minute, but the Canadian goalie saved it. Once again the Americans kept possession and kept pressing. Rapinoe blasted one that hit the left bar and rattled in to tie it at 2-2 in the 70th minute.

Just two minutes later, Sinclair turned the momentum back to the Canadians as she headed one in inside the box into the left edge of the goal on a corner play to put the Americans down by one yet again at 3-2.

It took a little luck for the U.S. to tie it. Rapinoe sliced a hard one straight away that went off the arms and hands of two Canadian players. A handball was called, giving the Americans a one-on-one penalty shot. Abby Wambach scored on a grass burner to the bottom left of the goal to tie it at 3-3 in the 78th minute.

Heath figured prominently over the last 12 minutes of regulation. First, she stopped a scary Canadian push when she kicked it away during the 83rd minute. In the 89th minute of the 90-minute regulation, Heath weakly poked a clearing kick, which allowed a charging Sophie Schmidt to steal the ball. Heath recovered enough to bother Schmidt on the shot and it went just wide of the goal.

With three minutes of overage time added to the end of the second overtime, it looked as if the game would go to penalty kicks, which would have been the first shootout ever in Olympic play.

But O’Reilly and Morgan’s magical play in the 123rd minute of play kept the Americans dream of a gold medal — and redemption against Japan — alive.