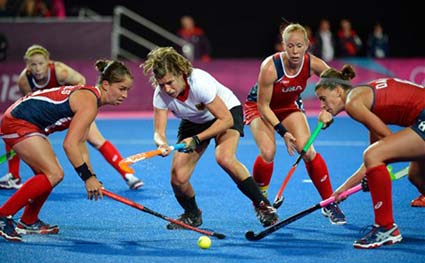 The United States’ field hockey team fell to Australia 1-0 Thursday, dampening the chances of making the medal round.

UNC’s Amy Tran Swensen ’02, as in the 2-1 opening loss to Germany, kept the Americans in the match with several tremendous saves in goal. Regarded as one of the best goalkeepers in the world, if not the best, Swensen made three diving saves over a five-minute period of the second half to energize the U.S.

It also took a couple of defensive plays by the other two Tar Heels on the team to keep the Australians from pulling away. Rachel Dawson ’07 knocked the ball away after a teammate gave up an unforced turnover deep in U.S. territory with 24 minutes to play, and Katelyn Falgowski ’11 blocked a shot in front of the net with 18 minutes to go.

But the Americans made too many errors on offense, giving the ball over to the Aussies several times, resulting in much more action in front of Swensen than in front of the Australian goalie.

Dawson had a chance to put the U.S. in front first with a hard shot on goal with seven minutes left in the first half. But an Australian illegally used her foot on the shot, which would have gone in for a score. As a result, the Americans got a penalty stroke, which is a one-on-one shot in front of the goal versus a standard penalty corner play. U.S. captain Lauren Crandall failed on the shot, however.

Four minutes later, Australia’s Anna Flanagan scored in the top left corner of the goal on a penalty corner play to give the Aussies the only score they needed. With Swensen standing at just over 5 feet tall, the Aussies often went high to try to score, with many sailing over the net but this one fell just in.

This loss will probably prove to be the undoing for the United States. The Americans, who haven’t won a medal in field hockey since 1984, need to win against undefeated New Zealand on Saturday and then winless South Africa on Monday to have a chance at making the medal round. But they also need other teams above them to lose and they need to pick up the scoring because of tie-breaker rules.