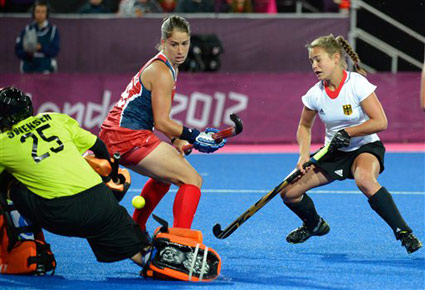 Despite a strong performance by goalie Amy Tran Swensen ’02, the United States women’s field hockey team fell to Germany 2-1 in the first round of the Olympic tournament on Sunday.

Germany forced the action on the U.S. side of the field most of the first half with Swensen being forced to make save after save, some in spectacular fashion.

But Germany scored on a high shot over Swensen into the left corner of goal on a penalty shot to give the Germans a 1-0 lead.

A backhand shot with 15 minutes left in the opening found its way over Swensen’s head again into the upper right corner of the goal. That made it 2-0, which the Germans took into halftime.

“Amy Tran Swensen had an incredible first half with wonderful saves and breakout opportunities,” said Missy Meharg, the Maryland field hockey coach who was doing the color commentary for NBC. But there was just too much constant pressure with the U.S. getting precious little pressure on the offensive end.

The second half was just the opposite as the U.S. controlled the field position and had numerous scoring chances. But it wasn’t until 15 minutes left when the U.S. got on the board, scoring on a Lauren Crandall deflection penalty shot to make it 2-1. Unfortunately for American TV watchers, the U.S. team’s only score came while NBC was taking a minute-and-a-half commercial break.

A diving stop by Swensen with 12 minutes left kept the U.S. in the game and started a fast break with Rachel Dawson ’07 leading the way. She moved it up the field quickly. While the U.S. team didn’t score, she changed the field position and put the Americans in a position to tie it. The U.S. had a chance with 10 minutes left when it appeared the Americans scored but the ball hit a player’s foot and the goal was disallowed.

While the U.S. women kept up the pressure, they never got closer to a goal the rest of the way. The Americans clearly outplayed the favored Germans in the second half but couldn’t score. Meharg gave a lot of the credit for the second half turnaround to UNC’s Dawson. “Rachel Dawson is doing an incredible amount of work all the way up and down the field, running the field quite well in second half,” she said. The defensive expert also took the ball away from a German player who was dangerously close to the U.S. net.

Dawson — whose sister, rising junior Melanie Dawson, plays field hockey for the Tar Heels — is considered the Americans’ defensive field general in the midfield. She has played more international matches than any other player on the team, having played a couple of seasons in Holland.

The third Tar Heel to start for the U.S. field hockey team is Katelyn Falgowski ’11. Considered the best one-on-one defender on the team, she had a scoring opportunity with 19 minutes left after she stole a pass. But the opportunity was foiled by a German defender. The Americans and their fans felt Falgowski was fouled on the play. Had the penalty been called, the U.S. would have been awarded a penalty shot, which provides the best scoring chance in field hockey.

Despite the fact that the U.S. hasn’t won a medal in field hockey since 1984, the Americans have high hopes because they have so much experience. Seven players return from the last Olympics and a few college players have taken the year off from school to commit fully to U.S. field hockey. But the U.S. must finish in the top two of their pool to advance. There are four more preliminary-round matches left for the Americans. Teams pick up three points for a win and one point for a tie.

The U.S. faces another tough task with a match against Argentina on Tuesday at 2 p.m. (EDT).