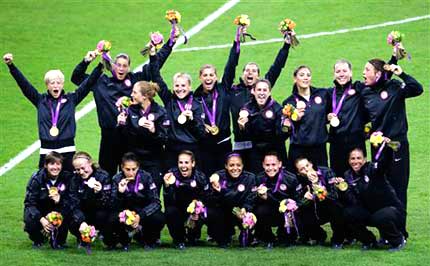 One of the enduring images — and arguably the most dramatic moment of the 2012 London Olympic Games — involved a Tar Heel.

With 15 Tar Heels taking part in London as players, alternates and a coach, perhaps the chances were pretty good that would happen.

But heat-seeking-missile of a pass from Heather O’Reilly ’09 to Alex Morgan, who headed it in for a goal, ended an epic overtime soccer match with Canada and propelled the Americans into the gold medal game, which they won 2-1 over Japan.

“Halfway through overtime [against Canada], I told the girls, it just takes one moment of some individual brilliance,” said the USA’s Abby Wambach. “Luckily we have Heather O’Reilly and Alex Morgan, who made that moment happen.”

O’Reilly, who has now won three Olympic gold medals, didn’t get into the game against Canada until it was in overtime.

“My teammates had been busting their butts for 100 minutes-plus by the time I went in there, so I was trying to bring high energy,” O’Reilly said. “My job as a flank midfielder is to get some balls in the box and give us a chance to get some headers. Abby played me a ball and I was able to turn my hips on it and get it in the mix, and Alex got her head on it.”

The emotionally and physically taxing 4-3 victory gave the U.S. team a chance to avenge a loss to Japan at last year’s World Cup finals. 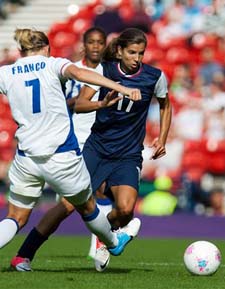 Fellow Tar Heel Tobin Heath ‘10, who started most of the Olympic games and who saw more action on the field than the more veteran O’Reilly, played a prominent role in the 2-1 win over Japan. Early in the game, Heath helped the U.S. team score first when she drove the ball past a pair of defenders down low to Morgan, who passed it cross goal to a charging Carli Lloyd, who headed it into the back of the net.

“Her contributions aren’t as evident on the stat sheet as players such as [Megan] Rapinoe, Wambach, Morgan and others,” wrote sports columnist Mike Chiari. “But she seems to make excellent, subtle plays in each and every game that contribute to a winning effort.”

U.S. coach Pia Sundhage has said that Heath is the future of USA soccer, and the main reason for that is her skill in controlling the ball. Chiari said he expects Heath to be one of the elite midfielders in the world. “I’m not sure that any player on the American team has better ball skills than Heath, as she has proven capable of ball-handling her way out of a phone booth and often sends defenders spinning,” he wrote.

Heath’s ability to spin herself may have helped mask a hand ball that could have resulted in a penalty-shot goal. A free kick by Japan was knocked away by Heath’s hand and arm but she quickly spun herself around and that apparently made it appear to officials that the ball struck her body. It was one of the most controversial plays in soccer or any sport during the 2012 Olympics.

Certainly it didn’t appear that Heath purposely used her arm to stop the ball, but it turned out to be a big play, as the Americans held on for the 2-1 win.

It was the second gold medal for Heath, who said it’s special to represent her country and to stand on the podium as a gold medalist.

“I don’t think it’s something you can put into words. I don’t think it should be,” Heath said. “The feeling that I was most shocked about was just seeing your country’s flag being raised. I was shocked by how moved I was by that. I’m usually a pretty mellow person, but when that happened, I thought that was pretty cool.”

She has a similar affection for UNC. While she was born an American, she chose to come to UNC. Even though she called it a “no-brainer” — considering the history of women’s soccer at Carolina and its many national championships — she loved the college and the area.

“I really made a family down there,” she said. “The winning was fun, but so was doing it with people you care about. I really became rooted and established there. Those four years were some of the best of my life.”

Other Heels in the Olympics

Other Tar Heels didn’t fare quite as well in the medal chase as Heath and O’Reilly but still made their mark.

The only other UNC graduate to secure a medal was Robyn Gayle ’08, a fullback on the Canadian women’s soccer team, who came away with a bronze medal. But Gayle was injured in the Canadian’s opening game 3-0 victory over South Africa and could not play the rest of the Olympics.

Yuri Suguiyama ’05 probably feels as if he got a medal, but it was his student, Katie Ledecky who swam for a gold medal in the Olympic 800-meter freestyle, breaking Janet Evans’ 23-year-old American record in the process.

Ledecky, the youngest member of the U.S. Olympic team in any sport at age 15, wasn’t even thinking about the Olympics last fall when her coach, Suguiyama, planted the idea in her head. He asked her what her ultimate goal would be and she said she didn’t know.  “Maybe the Olympics?” he suggested. “Yeah,” she said. He made her state her goal herself, asking her to repeat it as if she meant it. She certainly swam as if she meant it, leading the long race from the start and finishing well ahead of the second-place swimmer.

UNC marathon runner Shalane Flanagan ’05 led her long race at the start but ran out of gas over the last few miles and finished in 10th, despite being just a few seconds off her personal-best time.

Flanagan came into the race as a medal contender, with a short but successful history in marathon, and gave up her spot in the 10,000-meter run, a race where she picked up a bronze medal four years ago, to focus on the longer race. The Americans finished 11th, 12th and 13th in London in the 10,000-meter race, almost a minute slower than Flanagan finished in the 2008 Olympics.

‘‘Everyone envisions themselves standing on the podium,’’ Flanagan said. ‘‘I was going for something big like that again.”

Flanagan said that she and teammate Kara Goucher had never worked so hard for anything. But, while she went for it early, she said once the Kenyans and Ethiopians made a big move in the last quarter of the race, she struggled to stay within striking distance.

Another American track star with high hopes was Alice Schmidt ’04, who advanced to the semifinal round in the women’s 800-meter run by finishing second in her heat. She didn’t make it through her semifinal heat, despite finishing fourth with a time almost identical to her preliminary heat. No American won a medal in the event.

“I got stuck in the middle of the pack, so unfortunately, when things slowed down I was part of the train,” Schmidt said. “It wasn’t the race I hoped or dreamed for, but it was definitely a very positive Olympic experience.”

The American women’s field hockey team was expected to contend for a medal but finished in sixth place in pool play and didn’t advance to the medal round.

Despite the fact that the U.S. won just one game, Carolina’s Amy Tran Swenson ’02 was one of the top performers, and as the goalkeeper had tremendous save after save, keeping the U.S. in all but one game. That one game featured South African opponent and fellow Tar Heel Illse Davids ’09, who helped South Africa to a 7-0 rout. But South Africa ended up only one spot better in the tournament and also failed to reach the medal round.

India’s Vikas Gowda ’06 finished eighth in the discus competition. While Gowda qualified for the final round, he wasn’t expected to win a medal. His final-round throws were well short of his personal best and short of his earlier preliminary round tosses.

Sierra Leone’s Ola Sesay ’01 finished 12th in her group in the long jump. Sesay didn’t come close to her personal best of 6.71 meters, reaching just 6.22. Overall Sesay finished 23rd out of 32. She said she didn’t know what went wrong, and  was disappointed that she wasn’t able to get Sierra Leone’s first ever Olympic medal.

Waiting in the Wings

Expect to hear some of these names again, as well as those of other Tar Heels, when the Olympics come around in 2016 in Rio de Janeiro.

One of Tobin Heath’s final Olympic Twitter messages wasn’t about going to the closing ceremonies on Sunday, it was about going to church. “Stoked for church tomorrow,” she tweeted. Here is the church she attended:  http://www.hillsong.co.uk/

Still, Heath had fun at the closing ceremonies, as shown on the right in this image from a very short video singing along during the closing ceremonies and in the middle in the next image showing off her gold medal with teammates during the ceremonies: http://24.media.tumblr.com/tumblr_m8nx4yeVf31r7e0ono1_500.gif http://24.media.tumblr.com/tumblr_m8o6pwOyIx1r7e0ono1_500.gif

Just in the last few days, a Heath fan put together this video: http://www.youtube.com/watch?v=8dT-Xie-Fr8

A video profile of Heath: http://www.youtube.com/watch?v=jk85R_59J9s

Here’s a video from last week of O’Reilly being quizzed on Kick TV:  http://www.youtube.com/watch?v=Q8ALxoTB6fM

Here’s a video of O’Reilly’s pass and Morgan’s header that won the game vs. Canada:  http://www.youtube.com/watch?v=8TTVF3_3JBU&feature=related