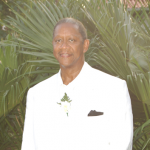 William Chamberlain is a radiological emergency training officer with the N.C. Division of Emergency Management working on an initiative through the U.S. Department of Energy and the Nuclear Regulatory Commission. In this role, Chamberlain prepares the nation’s first responders to react to, mitigate and recover from disasters, man-made or natural.

Chamberlain attended Carolina from 1969 to 1972 and was the second African-American scholarship basketball player for The University of North Carolina. While at UNC, Chamberlain was a premiere athlete; he was named the NIT most valuable player in the championship game over Georgia Tech at Madison Square Garden in 1971, and he led Carolina to the Final Four against Florida State University in 1972. He received All-ACC and All-American honors, played professionally in the National Basketball Association, American Basketball Association and European League, and he coached on the collegiate level. Throughout his tenure as a student-athlete, he showed a keen awareness of his African-American heritage and a deep, abiding concern for fellow black students. Chamberlain was an active member of the Black Student Movement (BSM), working on anti-war protests and Black Pride agendas. During his years at Carolina, he confronted several race issues on campus, including the lack of black fraternities and sororities, and “Dixie” being played and Confederate flags being waved during football and basketball games. He also participated in the 1969 cafeteria workers strike.

The Christian principles that UNC Men’s Head Basketball Coach Dean Smith conveyed to Chamberlain’s parents, Martin and Pearl Chamberlain, were inspiring to Chamberlain. The recruitment and scholarship award to Charles T. Scott was an important factor, but for Chamberlain, not the determining factor. “What appealed to me was the sincerity of the coaching staff and the barrier-breaking mentality of Coach Smith,” Chamberlain said.

It was this unwavering commitment to civil rights that fueled Chamberlain. He found the members of the Black Student Movement, mostly the 58 black undergraduate students who were enrolled in 1968-69, to be focused and cohesive. This tight-knit group was vigilant in anti-Vietnam War protests as well as Black Pride agendas. “We socialized together, studied together and took classes that addressed current issues and required subject matters,” Chamberlain said. “We had meetings and discussed how we, as a group, could most effectively address some of the campus policies that were unfair to black students.”

Chamberlain and other BSM members supported Howard Lee in his successful mayoral campaign in Chapel Hill, and they carried out the very successful campus cafeteria workers strike in the fall of 1969.

Chamberlain recalls that during the strike, black students closed all campus cafeterias and most students did not cross the picket lines.

“There was a worker in Lenoir Cafeteria who sliced his finger, to the bone, cutting sandwich meat, and was sent home, past UNC Memorial Hospital, and fired the next day for not coming to work!” Chamberlain said. The BSM, under the leadership of Preston Dobbins and Jack McClean, drafted a petition, which Chamberlain shared with Coach Smith.

“I’ll never forget that day: I walked into the basketball office and asked Betsy Terrell, his administrative assistant, to speak to Coach Smith. She called into his office, and in one minute the Chancellor came out, and I was summoned in. I explained to Coach Smith that I thought I made a mistake, and UNC was NOT the place for me; I could not play basketball here while the black folks who work on campus are treated like slaves.”

Chamberlain handed the petition to Coach Smith and told him about the worker in Lenoir cafeteria who was injured, sent home and fired. “Coach asked me to give him some time. At the rally that afternoon, I explained to the student population why I was leaving this backward, racist institution.”

The next morning Coach Smith went to Chamberlain’s dorm room, with the petition signed by all members of the athletic department and staff, in solidarity with the BSM.

“[Standing up for] UNC’s cafeteria workers truly was the most rewarding activity during my time at my beloved university,” Chamberlain said. “Coach Smith walked his talk and stood up for those who were treated like second-class citizens. He never wavered, and neither did I.”

Chamberlain has continued to give to the University long after his graduation in 1972. He remains dedicated to calling out racial injustice and has become a fixture on the UNC campus, continuing to tutor and advise all students, particularly student-athletes.