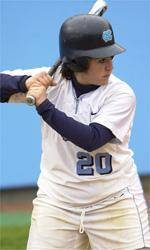 Natalie Anter ’02 was part of the Italian national softball team in the  the 2004 Olympics. When she graduated from Carolina, she held four single-season records and six career records. Perhaps most notably, she is the home run leader with 34 career homers and she ranks second all time with 15 in a season.

Anter also holds the record for career runs batted in (164), total bases (389) and walks (84). She said she was excited about playing international softball. “Playing for Italy has given me an amazing experience traveling the world and gaining the respect as a top international player as well as meeting and playing with and against some of the top players in the world,” Anter said.

Anter was named to the Atlantic Coast Conference 50th Anniversary Softball Team after leading the Tar Heels to their first ever ACC title in 2001. Carolina went 159-88-1 in her four years and made one NCAA Tournament appearance. She is the only UNC player to earn All-ACC and All-Southeast Region for all four years.

Her Italian team won just one game but Anter played in each game of the Olympics.

Italy played China on Sunday, Aug. 15, in the preliminaries and won 7-5. Anter was a catcher and center fielder.