For more than 100 years, the biggest rivalry in college basketball has played out in the pages of The Daily Tar Heel at UNC and its counterpart at Duke, The Chronicle. Now a notable rivalry...

Like most students, Jeff Taylor ’87 was a basketball fiend during his Carolina days. Even now, like many fans in the States, he can wax poetic about the NCAA and the NBA, but after spending... 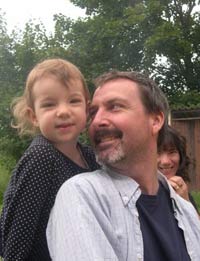 Richard Harrill ’91, who has Peace Corps experience and co-founded the Washington- and Budapest-based Youth Services International, is the new director of the Campus Y.

Harrill, who also has a 1998 law degree from Carolina, succeeds Virginia Carson ’71, who retired last summer. He began work in August.

Most recently, Harrill was director for Europe of the Public Interest Law Institute in Budapest, an organization committed to building the advocacy capacity of nongovernmental organizations, promoting clinical legal education, legal aid reform and pro bono practice in Central and Eastern Europe, Russia and Asia.

Before that he was a youth policy coordinator at Columbia University’s School of Social Work, where he researched international civic engagement and school-to-work transitions studies.

He also worked in the Bard College Program on Globalization and International Affairs and at the Bonner Foundation, where he developed an analytic framework for evaluating the Bonner Scholars Program.

As a student at Carolina, majoring in political science, Harrill served as co-president of the Y, where he worked as a volunteer at the local homeless shelter and served on the board of the Campus Outreach Opportunity League.