The University has issued an open call for suggestions of new names for three campus buildings whose original names were removed last year because of their namesakes’ ties to white supremacy. UNC seeks new honorifics... 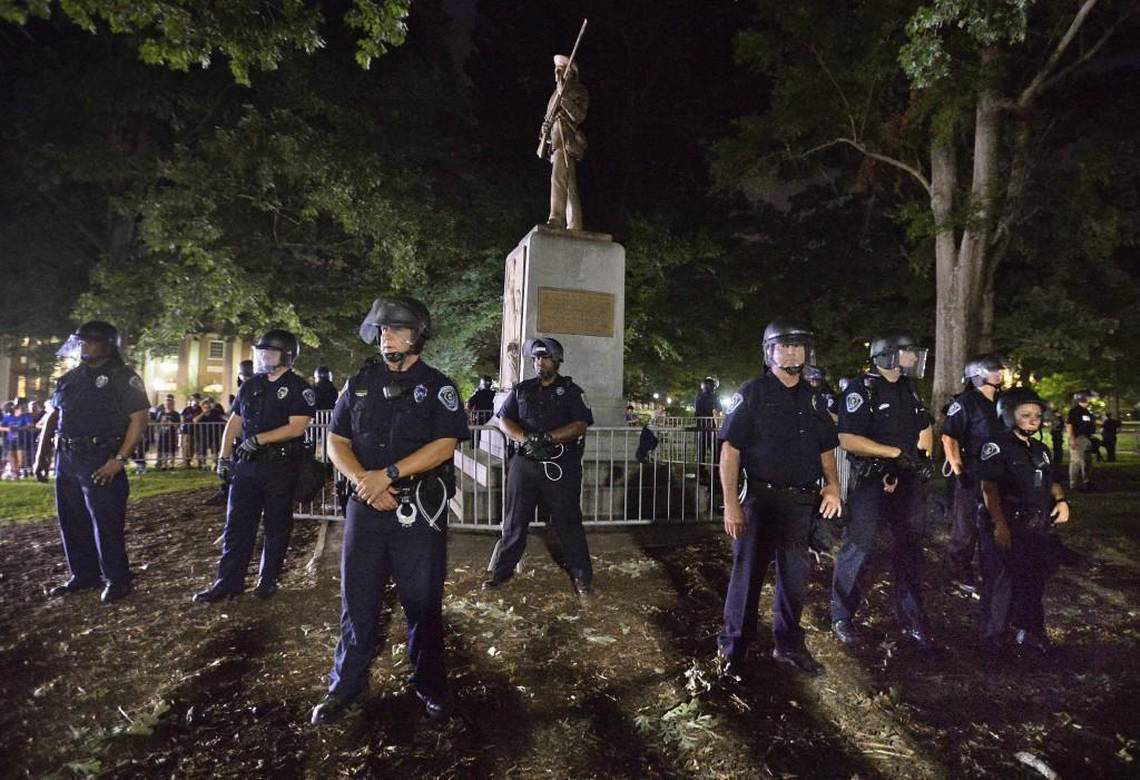 Police filled the space between circles of barricades at a rally for removal of Silent Sam on the evening of the first day of fall classes. An estimated 800 people gathered in McCorkle Place and spilled onto Franklin Street. (News & Observer photo by Chuck Liddy)

Amid a towering canopy of trees, an undulating lawn with crisscrossing bricks, and just enough of the sound of the pleasant lure of Franklin, it should be among the most splendid places on the campus.

When students of color and their allies rallied two years ago to change the name of Saunders Hall, they didn’t go to Saunders but came here — perhaps because this is where the University was begun, perhaps because Silent Sam has the defiant face of one who fought for that which they abhor.

Defense of the preservation of history is very real; so, too, is the pain wrought by slavery and Jim Crow and the march of civil equality, which often seems to drag its feet.

This has been their rallying point. It was again in August, on the first day of class, as some 800 people rallied for several hours around the statue known as the Confederate Monument — erected, as the Alumni Review reported in June 1913, “in memory of all University students, living and dead, who served in the Confederacy.” The vast majority at the August rally renewed a demand that the monument be removed, shouting at the statue through a double ring of steel barricades and another of police.

The event, in the wake of violence in Charlottesville, Va., appeared chaotic at times, but no injuries were reported. Of three arrests, one was a Carolina student.

Some of those present supported continuing to let Silent Sam stand as a monument to the Civil War dead, amid shouting of “Tear it down, tear it down.” Angry individual confrontations were spotted, but there were no immediate reports of an organized presence of groups such as the Ku Klux Klan, which was a force at the Charlottesville rally.

One student said that, when she walks through McCorkle Place at her graduation next May, “it’s not going to be in my way.”

Sam was not a general but a foot soldier, an order taker. He stands for 287 students and alumni, according to GAA records, who died fighting. He stands also for this: On the day the statue was dedicated, Julian Shakespeare Carr (class of 1866), an industrialist for whom a campus building and the adjacent town are named, boasted to the crowd: “One hundred yards from where we stand, less than ninety days perhaps after my return from Appomattox, I horse-whipped a Negro wench until her skirts hung in shreds, because upon the streets of this quiet village she had publicly insulted and maligned a Southern lady, and then rushed for protection to these University buildings where was stationed a garrison of a hundred federal soldiers. I performed the pleasing duty in the immediate presence of the entire garrison, and for thirty nights afterward slept with a double-barrel shot gun under my head.” The Alumni Review’s June 1913 account omitted that part of Carr’s speech.

Defense of the preservation of history is very real; so, too, is the pain wrought by slavery and Jim Crow and the march of civil equality, which often seems to drag its feet.

Chancellor Carol L. Folt told the campus community just before the Aug. 22 rally that if it could, the University would take Silent Sam down due to safety and security concerns. But a law enacted by the N.C. General Assembly in 2015 prohibits the removal or relocation of publicly sited monuments without the permission of the N.C. Historical Commission.

Gov. Roy Cooper ’79 (’82 JD) notified the University that officials in Chapel Hill were within their right to remove the statue if they perceived an immediate threat. But University officials see the law differently. They believe they have not been given the clear legal authority to act unilaterally.

As of late August, Confederate monuments had been removed in about 20 U.S. cities, and proposals for removal had been made in about 15 more. Duke University — which as a private institution is not affected by the N.C. law against removal — took down a statue of Robert E. Lee, which had stood in the front entrance to Duke Chapel, after the statue was vandalized. The University of Texas took down three Confederate monuments.

The Chronicle for Higher Education had counted about 10 Confederate statues that recently had been removed or moved to different locations on campuses nationwide.

When the UNC trustees voted in May 2015 to change the name of Saunders Hall, they directed University administrators to research how best to tell UNC’s racial history in signage near the building and in McCorkle Place. A year and a half later, a large display opened in the building’s lobby; as yet, nothing has been added to Silent Sam’s quad. Current plans call for something to be finalized in spring 2018.

On the day after the rally, four campus-based student groups signed a letter stating: “We have voiced our concerns countless times and we are no longer asking — Silent Sam must come down NOW.” It concluded: “This is our promise: in the wake of administrative inaction, this community will continue to act and fight every single day until Silent Sam is taken down — one way or another. Until there is justice, there will not be peace.”