A Special Flight Path to Homecoming 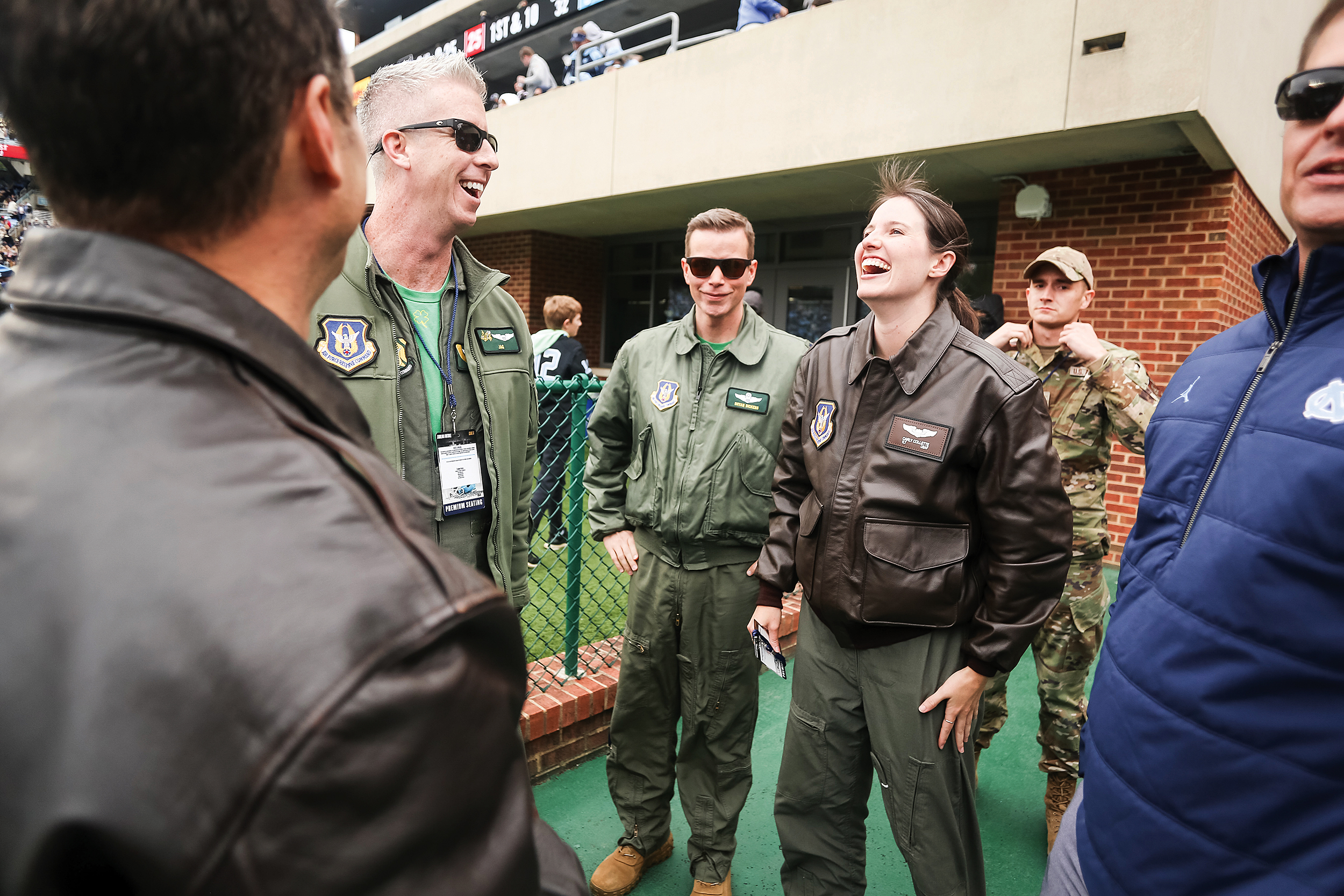 Carly Collette ’17 comes from a family of military pilots and joined the Air Force Reserve after her father arranged a “discovery” flight. (Ray Black III)

It took Carly Collette ’17 and her crew only minutes to fly an Air Force KC-46 refueling tanker from Burlington to skim the top of Kenan Stadium before the Homecoming game against Wake Forest, but her approach to that moment took five intense years.

Collette comes from a family of military veterans and Carolina alumni, including her maternal grandfather, William Land Parks ’58, a Navy ROTC cadet at UNC. Her dad, Perry Collette ’84, was in the Army ROTC and flew helicopters in hot spots while in active duty, then continued an aviation career as a civilian, flying for USAirways, helicopter life flights and UPS. Her mother, Kelly Collette ’84, has been a flight attendant with Delta Airlines for 35 years. And her brother, Will Collette ’15, was in the Air Force ROTC and is now a captain in the Air Force Reserve.

Carly had plotted out a corporate course for herself, and the two very different worlds of the military and business didn’t seem to fit together. Then an internship, designed to give her a taste of her planned career, left her uninspired.

“My dad and I are very similar,” she said, “and I thought he might have something figured out with the career he has.” Perry Collette arranged an Air Force “discovery” flight for his daughter, and she fell in love with the experience. “I knew this was what I wanted to do for the rest of my life,” she said.

Carly made the well-grounded decision to complete her business degree at UNC’s Kenan-Flagler Business School and get a master’s in accounting from Wake Forest University as she made herself more competitive for the Air Force. She got her private pilot’s license and an instrument rating and flew for two years before embarking on the tests, interviews and applications to join the Air Force Reserve. There she completed an intense escape-and-evasion course and learned to fly formations and aerobatics and to fly only a few feet apart from other large jets during refueling operations. 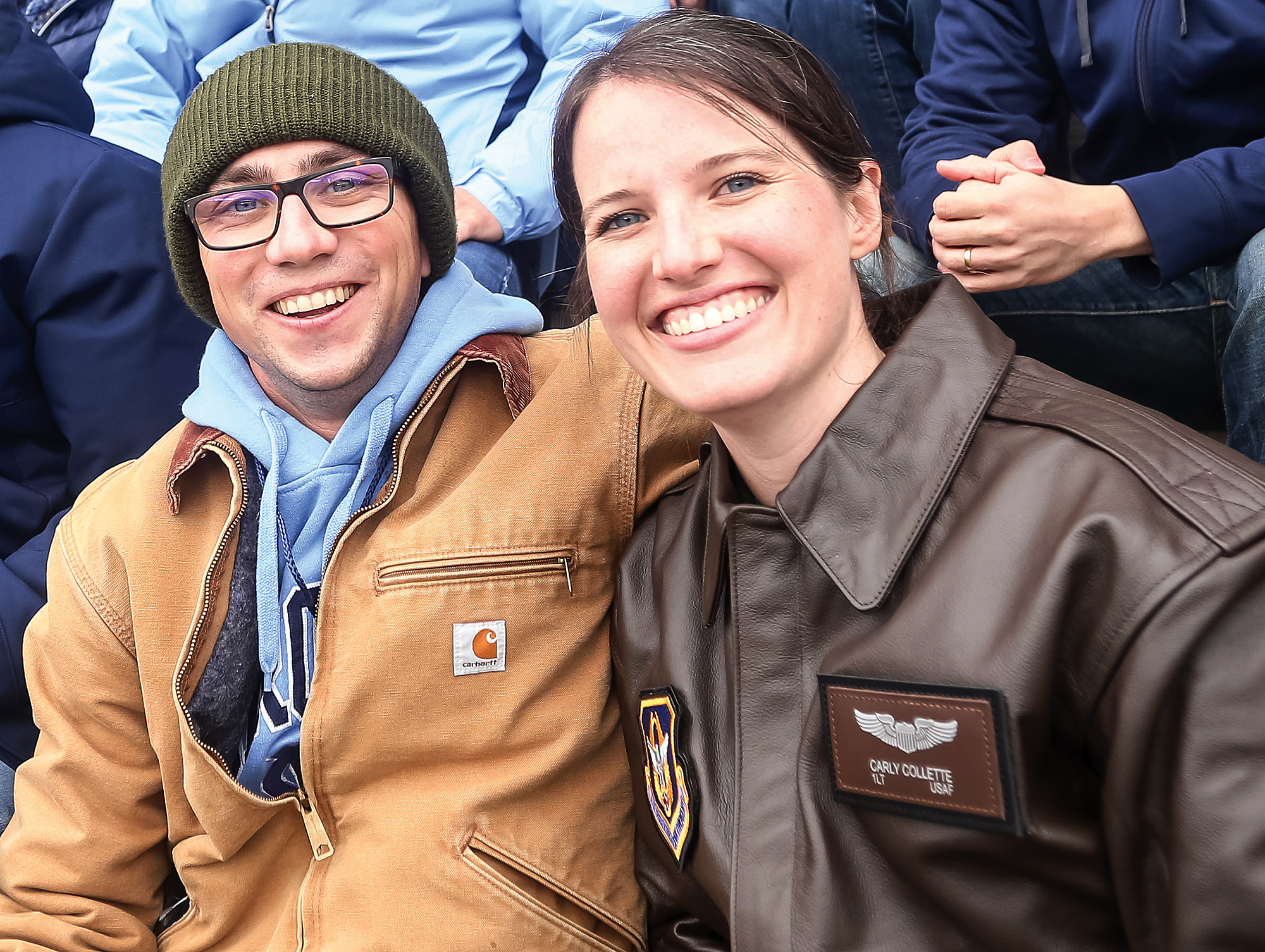 “We had it down to the second,” Collette said about the flyover, after which she joined family and friends in Kenan. ‎(Ray Black III)

The opportunity to fly over Kenan on Homecoming rotates among the Army, Navy and Air Force. Carly’s dad learned that this year was the Air Force’s turn, and that the Air Force had a brand-new midair refueling tanker at southeast North Carolina’s Seymour Johnson Air Base it wanted to showcase. Knowing that his daughter and former Tar Heel football player Tandon Mardis ’05 were part of the crew trained to fly that plane, he pitched the idea to people who could make it happen.

Getting the tanker to fly over the stadium just before kickoff took precision — “We had it down to the second,” Carly said — from the seven-member crew of the 77th Aerial Refueling Squadron: three on the ground making radio calls, and the three pilots and boom operator on the plane.

Typically, the crew flies at high altitudes on refueling missions, but this time they built a low-level route. Carly, now a first lieutenant, handled navigation, as she was familiar with the airspace around Burlington, where she still gives flying lessons when off duty. Four minutes away from Kenan, they descended to 1,000 feet. After they rumbled over the crowd, they flew to Raleigh-Durham International Airport, where a shuttle bus took them back to Kenan to watch the rest of the game. At the third-quarter break, they were recognized on the field by the Homecoming crowd for Military Appreciation Day. 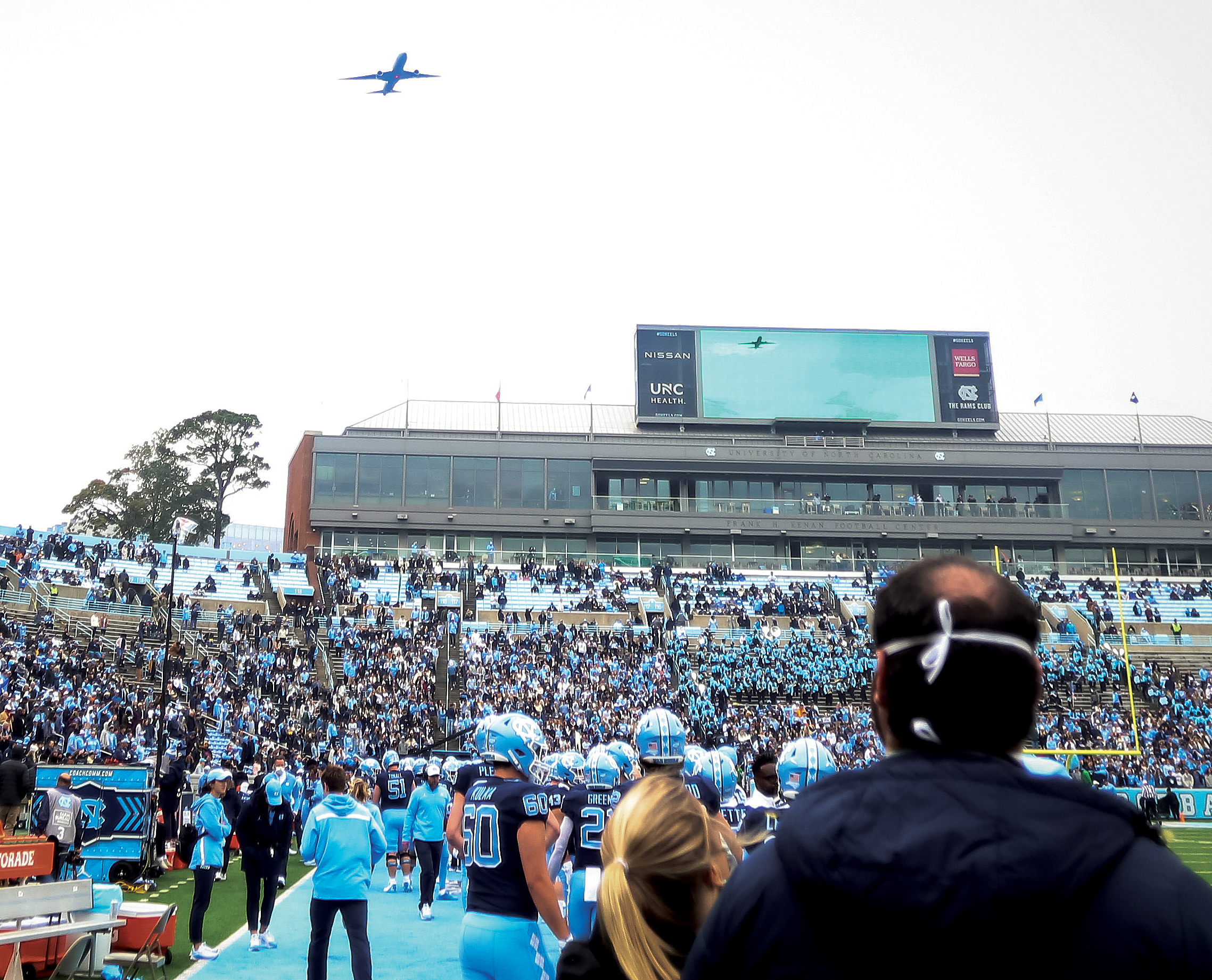 The Collette family waited for Carly in the spot where they’ve had tickets for decades (she attended her first game as an infant), Section 205, Row I. Kelly Collette, who usually gets emotional during flyovers — given her dad’s stint flying Skywarriors off aircraft carriers — said she admired Carly’s “courage and focus to achieve in areas where most people would crumble. … I’m thrilled my daughter has the adventurous spirit to take on this role.”

Perry said the low cloud cover threatened the mission, “so it was a big relief when I finally saw them on approach. Definitely my most memorable day in Kenan.”

Carly plans eventually to fly with a commercial airline, but her business degree was part of a personal flight plan: “It set me up with the right skills, the work ethic, the way of thinking, the relationship-building. Even if I knew Day One at Carolina I was going to be a pilot, I would have done everything the same.”