Alumni Turn Out to Meet Folt in Asheville, Wilmington 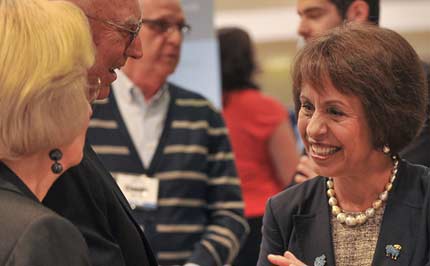 Alumni from opposite ends of North Carolina have been turning out at events hosted by the GAA to welcome UNC’s new chancellor, Carol Folt, to their hometowns.

They also have been welcoming Folt, who arrived on campus July 1, to Carolina’s extended family — first at UNC-Asheville on Sept. 18 and next in Wilmington on Oct. 3. The events were the first of a scheduled series of visits across the state.

“This might be my first visit, but it certainly won’t be my last,” Folt told the Asheville group of about 150 Carolina alumni and friends, touching on her vision for UNC as she also answered questions from the audience, ranging from tuition affordability to athletic accountability.

For many, the “Carolina on Our Minds” event was a family affair, showcasing North Carolina’s varied connections to UNC.

Caldwell County native Harry Martin ’42, a former N.C. Supreme Court justice, came to the Asheville event with son Matt Martin ’82 of Asheville, an associate judge of the Cherokee Tribal Court who also earned a law degree from UNC in 1985. Matt Martin said he hoped to hear the new chancellor talk about how the University could continue educating people on the positive economic impact of affordable public education. It’s something the UNC adjunct law professor says he thinks about a lot, especially as his daughter, Clarke Martin, is a first-year student living in the same dorm, Grimes, where her grandfather did.

Folt talked about the University’s affordability, noting that state budget cuts mean having to get creative in coming up with new sources of revenue to keep tuition affordable while not compromising quality. “I believe it’s possible,” said Folt, whose track record as a fundraiser helped secure her the chancellor’s job. She took office as UNC’s 11th chancellor after a 30-year career at private Dartmouth College in Hanover, N.H., as a professor of biological sciences and most recently as interim president.

Two UNC students from the Asheville area, juniors Dillon Vess of Burnsville and Missy Brown of Asheville, spoke about the effect of their own UNC education in speeches preceding Folt’s.

“Early in life, I knew UNC was very special,” said Vess, whose grandfather, Claude Vess ’59, a retired CPA, also attended the event. The younger Vess said the everyday quality of the University inspired him, that he was surrounded by professors who were titans in their fields and classmates who would be change agents.

“I find myself constantly inspired by my peers,” said Brown, who works with Sprout, a student-run business that partners with local sustainable farms to provide fresh, seasonal produce available for pick-up on campus.

Folt thanked the students for their perspectives on UNC and said she wanted the University to stay committed to drawing quality students from diverse communities across the state. Public universities have educated the vast majority of the country’s college graduates, she noted, and she reflected on Carolina’s long role as a trailblazer in the public university system.

“I think Carolina invented the public university,” Folt said, noting that not only was UNC the nation’s first public university, but that it had been at the forefront of public university systems since then, such as becoming a magnet for top-notch research in the post-World War II era. Folt said the University’s location in the Research Triangle would continue to bolster its research strength, through partnerships with organizations and other universities in the region.

Folt said she also wanted to keep a focus on academic excellence among the University’s athletes, an issue that has caused turmoil at UNC in recent years and contributed to her predecessor, Holden Thorp ’86, stepping down and later moving to become provost at Washington University in St. Louis this year.

Folt also praised UNC’s ongoing partnerships with other universities in the UNC System, such as the satellite doctor of pharmacy program the UNC Eshelman School of Pharmacy established at UNC-Asheville, which began enrolling students in fall 2011.

Earlier in the evening, Brad Blackburn ’85 said he hoped to see more such partnerships and looked forward to the publicity it could bring UNC-Asheville. “UNC-Asheville has been a well-kept secret that is starting to be known,” said Blackburn, who is on the board of directors for the UNC-Asheville Foundation.

UNC-Asheville Chancellor Anne Ponder ’71 — who also received a master’s degree in 1973 and her doctorate in 1979 from Carolina — spoke about links between the two campuses during her remarks, noting the UNC School of Medicine’s 2010 establishment of a regional campus at UNC-Asheville.

Asked what she wanted her legacy to be, Folt said it wasn’t about her but was about making UNC as a whole stronger and moving forward during a time when public higher education is more important to the country than ever.

“A chancellor is really only as good as the collective strength of the institution,” Folt said.

Folt will be formally installed as chancellor on University Day, Oct. 12.

In addition to the Wilmington event on Oct. 3, other “Carolina on Our Minds” visits featuring Folt are scheduled for Greensboro on Oct. 16 and Raleigh on Nov. 14. For registration details, visit /things-to-do/events-activities/beyond-the-stone-walls/.