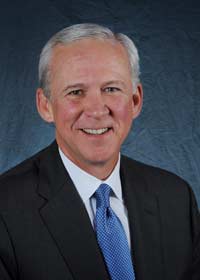 David Routh ’82 — a veteran corporate executive with extensive connections to philanthropy on campus as a former staff member and as a volunteer — has been named UNC’s new vice chancellor for development.

Chancellor Carol Folt announced the appointment Thursday via email to the campus community following approval by the Board of Trustees.

Folt selected Routh after a national search and the work of a search committee led by Board of Trustees Chair Lowry Caudill ’79.

Routh will begin work Oct. 14. Julia Sprunt Grumbles ’75 had served the past year as interim vice chancellor for university advancement following the resignation of Matt Kupec ’80, who left UNC in September 2012 after questions were raised related to his travel expenses.

Routh, a native of Greensboro, has been managing director for U.S. Trust/Bank of America Private Wealth Management in Raleigh and has spent the past 17 years of his career serving individuals, families and their charitable interests, including colleges and universities, private foundations and charitable trusts.

“David Routh brings to our leadership team a unique combination of fundraising expertise, collaborative leadership, passion and aspiration for Carolina,” Folt said. “He already knows a great deal about our development efforts on campus, and he has deep experience in the private sector that will be invaluable in leading our engagement with alumni and friends. He is the right person to lead University development.”

As vice chancellor, Routh will be the University’s senior development officer and oversee the central development office staff, which works closely with campus fundraising offices and affiliated foundations that support schools, the College of Arts and Sciences and other units. Routh also will be chief executive of the UNC-Chapel Hill Foundation Inc., the nonprofit corporation that receives gifts on behalf of the University, its schools and units.

At Carolina, Routh was director of gift planning in central development from 2006 to 2009 during the University’s last major fundraising campaign — Carolina First — which raised a record $2.38 billion over eight years.

He also is vice chair of UNC’s Lineberger Comprehensive Cancer Center’s board of visitors and chair of its capital campaign planning committee. He is a past board member and committee chair for the UNC Parents Council. As a student at UNC, he earned Phi Beta Kappa honors with bachelor’s degrees in economics and religious studies.

Routh serves on the Council for Entrepreneurial Development’s board of directors, including its finance committee. He is a member of the board of advisers of the Wildacres Leadership Initiative, which houses the William C. Friday Fellowship for Human Relations, a statewide leadership development program. A former president of the N.C. Planned Giving Council, Routh is noted for having provided leadership to several nonprofit boards, including the N.C. Humanities Council and the Greensboro Symphony Orchestra.