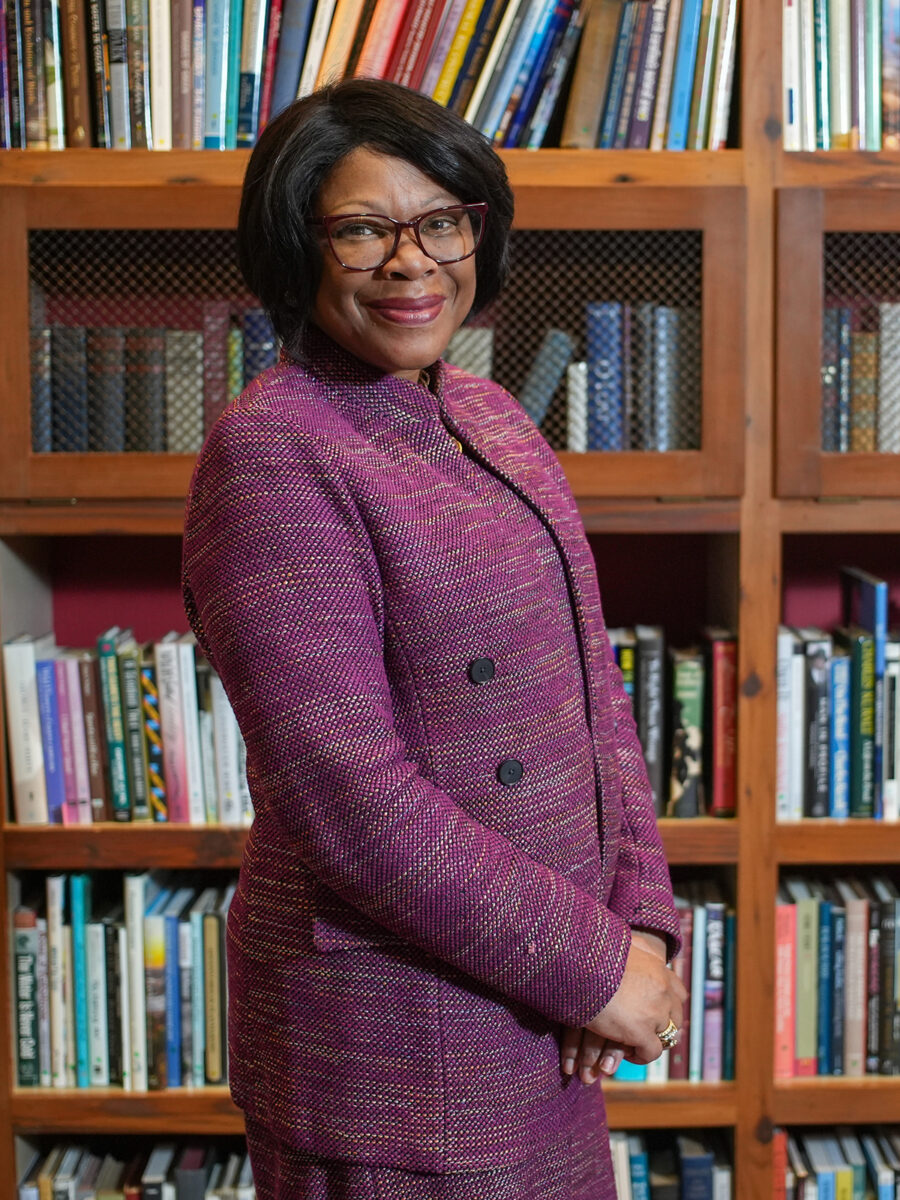 Anita Brown-Graham ’91 (JD) got kicked out of preschool for refusing to take naps and has been going full tilt ever since.

Most recently, Brown-Graham, the Gladys Hall Coates Distinguished Professor of public law and government at the School of Government, as well as the director of the ncIMPACT Initiative, kick-started the Carolina Across 100 Initiative, traveling around the state meeting with people in all 100 counties to form partnerships with local leaders to resolve each locality’s most vexing challenges.

She has a reputation for working hard and an uncanny ability to get things done. “Not every hard worker can do that,” a colleague said.

As a child, Brown-Graham moved from Liverpool in the U.K. (where her parents met as students) to Louisiana. She attended Louisiana State University and, upon setting her sights on law school, was heavily recruited by UNC. The admissions director was thrilled to receive her acceptance, saying, “I thought you’d choose Harvard.”

Underestimating her abilities, she hadn’t thought to apply to Harvard, but if she had, she reminds her husband, Phillip Graham ’88 (’95 MPH, ’99 DRPH), she would have been in Barack Obama’s class and might have become first lady.

Fortunately for North Carolina, and for her husband, Brown-Graham stayed in the South, other than during a clerkship after law school with a federal judge in California and a brief stint in corporate law, where she was the first Black lawyer hired in a 135-member firm. Her ability to find common ground among disparate parties emerged early. At the law firm, she often brought feuding parties to a resolution in her first meeting with them, even though it reduced her billable hours.

Restless, she began making inquiries about a career in academia. Word reached UNC Law School Dean Judith Wegner, who sent a message to her colleagues: “Hire her.” Mike Smith ’78 (JD), dean of the School of Government, persuaded Brown-Graham with an offer to teach government liability and economic development to revitalize struggling communities. In 1994, she came “home.”

In 2007, then-Davidson College President Tom Ross ’75 (JD) urged her to apply to direct an initiative forming at N.C. State University, the Institute for Emerging Issues. There, she worked with then-Gov. Jim Hunt ’64 (LLBJD) and shared his belief that anything one put one’s mind to could be accomplished. She easily connects with others while demanding much. People typically respond by meeting her expectations because they see the extraordinary effort she puts in.

At the IEI, Brown-Graham helps those from different fields and philosophies collaborate and work toward goals for the greater good. She notices which faculty members can align in a common purpose and builds relationships to benefit the people of North Carolina. She helps communities identify what they need, where they can find money to fund ideas and how they can solve their problems. Often, she looks at the group of decision-makers gathered around the table and asks, “Who’s missing?”

She walked the walk by participating in the N.C. Leadership Forum. She is direct and respectful and can speak difficult truths in a way that people can hear without taking offense.

As director of the IEI, Brown-Graham managed the people doing the work, but she preferred to be in the midst of birthing change. “I’m happiest at the bottom of the learning curve,” she says. So when Smith tempted her with a challenge the School of Government had been struggling with for years, she came back to UNC, this time as director of the ncIMPACT Initiative. The organization determines how the school and local leaders can partner effectively to apply innovative policy, evidence-based insights and data analysis to deal with tough challenges. The Carolina Across 100 initiative, which began in 2022, is an ncIMPACT five-year program focusing on such issues as the economic impact of COVID.

Brown-Graham has received numerous awards. Triangle Business Journal honored her with a Women in Business Award in 2014, named her CEO of the Year in 2017 and presented her with the inaugural Andrea L. Harris Legacy Award in 2021. (Harris co-founded the National Institute of Minority Economic Development to support minority and women-owned businesses.) Brown-Graham was invited to the White House in 2013 as a Champion of Change. She received the Eisenhower Distinguished Fellow Award in 2021; she also is a William C. Friday Fellow and an American Marshall Fellow.

Brown-Graham says she appreciates being the face of the work that brought those honors, but “there’s nothing that I have ever done that I’ve done alone. … I recognize all the work of people who don’t get seen and how many there are.”