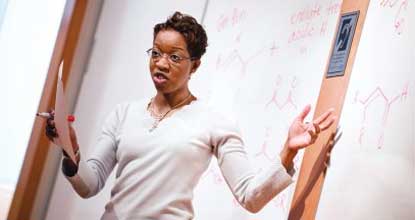 Chancellor Holden Thorp ’86 chose his colleague in consultation with the University’s Commencement Speaker Selection Committee, which is made up of an equal number of students and faculty.

“Valerie Ashby is among our best teachers, in the classroom and the lab,” Thorp said. “She is an inspirational colleague and mentor, and a leader in biomaterials research. Highly regarded by her students and colleagues alike, she will bring an excellent and timely message to our graduates in December.”

Ashby, who also received her doctorate from UNC in 1994, joined the Carolina faculty in 2004 as an associate professor in the chemistry department after teaching at Iowa State University from 1996 to 2003, where she once was named Teacher of the Year in the College of Liberal Arts and Sciences. She was awarded UNC’s Gordon and Bowman Gray Distinguished Term Professorship for 2007-12.

Ashby’s chemistry research focuses on the design and synthesis of polymeric biomaterials. Her work has led to 10 patents and collaborations with DuPont, 3M and Chevron Phillips. At UNC, she teaches organic chemistry to sophomores and juniors, as well as introductory chemistry to freshmen.

She also directs the University’s Summer Pre-Graduate Research Experience, which helped launch her career in research and teaching in 1988 soon after her own graduation from Carolina with a bachelor’s degree in chemistry. The program exposes minority undergraduates across the country to research and encourages them to pursue doctorates in the sciences, technology, engineering, math, economics or other social and behavioral sciences.

Ashby has been a National Science Foundation postdoctoral fellow and visiting scientist at Eastman Chemical Co. and IBM. In 2002, the American Chemical Society named her as one of the top 12 young female chemists in the country.

“It is an absolute honor and a privilege for me to be asked to speak,” Ashby said. “I am so excited about sharing such a special day with fellow Carolina grads.”