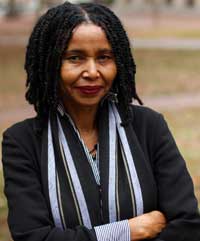 Eunice Sahle, an associate professor in the Department of African and Afro-American studies, will become the department’s new chair on Jan. 1.

Julius Nyang’oro, who had been chair since 1992, resigned the post in August after his name surfaced in connection with three different aspects of the investigation into the UNC football program. Sahle takes over a department that is the subject of a University review over questions raised in the football probe about the practice of independent study.

Twenty-one percent of the enrollments in independent studies courses in the department over a five-year period starting in fall 2006 were football players. The Afro and African-American studies department offered 76 independent study undergraduate courses over that period.

Nyang’oro, who has been on the UNC faculty since 1990, also is the professor who missed football player Michael McAdoo’s plagiarism, which came to light in McAdoo’s lawsuit against the University and the NCAA seeking reinstatement to the team after he was suspended last fall. The suit was dismissed.

Sahle has been at UNC since 2001, with joint appointments in African and Afro-American studies and the curriculum in global studies. She has recognized expertise on the political and economic development of Africa in the context of globalization.

Sahle’s publications include World Order, Development and Transformation (2010,) and she has received competitive research awards from the International Development Research Center in Canada and the Walter and Duncan Gordon Foundation. Her current research focuses on urban governance and citizenship in Durban, Toronto and Paris, and on the geographies of political violence, territory and state formation in Kenya.

She has won two honors for teaching excellence, including the 2006 Edward Kidder Graham Award and a 2011 Student Undergraduate Teaching Award.

Sahle also has been involved in the internationalization of the curriculum through the development of study abroad programs focusing on globalization, development and civil society. She co-directed a program that took students to Tanzania and Mexico in the fall of 2009, and she has developed another program that will begin next summer at the University of KwaZulu-Natal in Durban, South Africa.