Baddour to Step Down as AD; Davis Not Culpable, Thorp Says 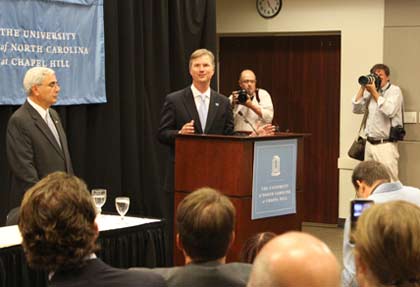 On the day after Butch Davis was dismissed as head football coach, Athletics Director Dick Baddour ’66 said he will step down as soon as his successor can be found.

Chancellor Holden Thorp ’86 told a news conference on July 28 that the decision to replace Davis was his, and that while he still believes Davis had no knowledge of activities within the program that brought on an NCAA investigation, the University’s reputation had started to suffer.

“I cannot stand for that,” he said. “We cannot get better without making a change. The best way for the program to move forward is to make a change.”

Thorp said UNC is prepared to make a $2.7 million severance payment to Davis, per his contract stipulations on being dismissed after not being found culpable in the investigation. The money would be paid from athletics department funds. Davis did not attend the news conference.

UNC plans to put a coach currently on the staff in charge of the team for this season, and Baddour said he could have a decision as early as late today.

Baddour, a 45-year University employee in his 15th year as athletics director, was visibly emotional in announcing that he would retire. He said he had planned to retire at the end of the calendar year, but that it was important to have a new AD in place to hire the next permanent football coach. He said the removal of Davis was done in the best interest of the University. “Better days are ahead,” he said, adding that “I’ve given my heart and soul to the University for 45 years.”

Thorp said there was no new information from the NCAA or from within the program that led to Davis’ firing.

“This is really about the cumulative effect” of the investigation on Carolina, he said. He acknowledged that the timing “is terrible” with the start of preseason practice eight days away. “But it is the right decision. This has been weighing on me for several weeks.”

Thorp said he consulted with several people before telling the trustees on July 27 that he intended to remove Davis. In the University’s administration, the trustees delegate final decisions on athletics to Thorp. Thorp said he had the unanimous support of the board.

He added in response to a question that the decision was not a self-imposed penalty intended to soften possible sanctions by the NCAA.

Thorp came in for heavy criticism in the days after Davis was fired, and a “fire Thorp” website soon surfaced. On Aug. 8, a group of lawyers, all alumni, filed a request for records of Thorp’s communications with some UNC officials. The group said it represented “a group of investors who, over the last year, invested considerable amounts of money in the Kenan Stadium end zone expansion project known as the ‘Blue Zone.’ ” One of the lawyers, Donald Brown ’82, told The N&O that his clients were “furious” about the timing of the firing and that they had invested based on Davis remaining as the coach.

Baddour’s contract runs to next June 30, and he will assume other duties in the department once his replacement takes over. Thorp said he wanted Baddour with him when UNC meets with the NCAA in October to deal with the nine allegations against the program.

Davis said in a statement to a newspaper on July 27 that he was genuinely shocked at his firing. In the news conference Baddour indicated Davis might have had hints that it could happen based on discussions the two had had recently.

In Davis’ statement, released by The News & Observer of Raleigh, he said, “My family and I were surprised and saddened to learn that I have been relieved of my duties as head football coach at Carolina. I am not naive enough to have ever considered this situation anything less than a serious matter and a significant priority. I have worked as hard as possible to address all aspects of the program that have been questioned. I fully believe we were on our way to getting past these issues and moving ahead in a positive direction.

“My family and I have been able to endure this difficult period in our lives for several reasons: First and foremost, as a family we have known all along that I personally did nothing wrong. That is the truth.”

Baddour and Thorp had expressed support for Davis, who was about to begin his fifth season as head coach, throughout the investigation. Davis also appeared at the annual Atlantic Coast Conference football kickoff in Pinehurst  a few days before he was fired and was interviewed extensively about the coming season.

The University has waited a year for resolution of a two-pronged investigation into the football program, involving improper player contacts with professional sports agents and other outsiders and academic misconduct. Sixteen players were taken out of the lineup during the 2010 preseason or after the season had started.

Two players were reinstated before the first game Sept. 4, two were dismissed from the UNC program for violations of team rules, two were declared permanently ineligible by the University for NCAA violations, three were suspended for this season but will have eligibility remaining in 2012, four were cleared during the investigation, and two others were cleared to play after serving suspensions for violations. One player was suspended after he had played in games at the start of the season, and he was cleared last winter and reinstated for another year of eligibility.

In the case of one player, the University vigorously appealed to the NCAA its decision to rule Michael McAdoo permanently ineligible. The appeal was denied.

McAdoo sued UNC and the NCAA, and in early July he sought an injunction to reinstate him pending the outcome of the suit. A Superior Court judge denied the motion.

McAdoo’s suit led to the public release of a paper he submitted for a class which appeared to show multiple instances of plagiarism. The News & Observer published comparisons of excerpts from the paper alongside the text of multiple original sources, in which the two matched word for word.

Thorp told the trustees this week that he regretted the University had not caught the plagiarism, which was not among the charges brought to the Honor Court. He told the trustees that Faculty Chair Jan Boxill would lead a review of the court’s procedures starting immediately in the new school year.

Julius Nyang’oro has resigned as chair of the department of African and Afro-American studies over his involvement in multiple aspects of the investigation. Nyang’oro, who has been at UNC since 1990, is the professor who missed McAdoo’s plagiarism. In August, Nyang’oro was found to have hired Carl Carey Jr. ’00 (PhD), a registered sports agent who was representing some former Carolina football players, to teach a course this summer called Foundations of Black Education. Carey taught the same course in 2000 and 2001. Karen Gil, dean of the College of Arts and Sciences, said she approved the appointment, unaware Carey was an agent. At Baddour’s direction, athletes were advised not to take the course; an Olympic-sport student was permitted to, since agent contact was not an issue with her.

Thorp said in a prepared statement, “The University has been reviewing academic issues related to some courses in our Department of African and Afro-American Studies. The questions that we have concern possible irregularities with courses that included undergraduate students. We will continue to review the facts to determine whether there have been any violations of university policy and to determine what additional actions are necessary.”

No details have ever been made public in most of the 16 individual cases. Those who have been dismissed or suspended could have academic issues, outside contact issues, or both.

Associate Head Coach John Blake resigned shortly after the season started, just ahead of revelations that he had been taking money from a friend who is an agent.

The questions about academic misconduct involve players and a tutor in the Academic Support Program for Student-Athletes. The tutor, Jennifer Wiley ’09, who was an undergraduate student when she worked for the program, also had been employed privately by Davis to tutor his son. On Nov. 11, UNC sent a letter of disassociation to Wiley, who was found to have provided travel and transportation help to players in addition to being involved in possible academic misconduct on the part of players. (She was let go by UNC in July 2009 after she appeared to have friendships with football players she worked with, which is not allowed.) The University and the NCAA have said almost nothing about what went on between the players and the tutor. UNC officials said their cases were referred to the Honor Court, whose proceedings are not public.

The University released phone records and records of parking tickets sought by media outlets as part of the investigation after the N.C. Court of Appeals ruled against UNC’s desires to keep the records private.

Blake is accused of:

The names of a number of players were redacted by UNC in releasing the report on June 21. The next day, UNC told The News & Observer that it also had redacted from the report the names of two individuals, identified as athletics department employees. Davis reportedly was not one of the two employees cited.

UNC was given until Sept. 17 to respond to the notice; the NCAA then would be expected to rule on whether violations occurred and determine any penalties. The NCAA asked that five UNC representatives attend a hearing on Oct. 28.