Rye Barcott ’01, who co-founded an organization to develop local leaders and alleviate poverty in East Africa’s largest slum, will be on campus this month to deliver the Hillard Gold ’39 Lecture.

After the free public lecture, which begins at 7 p.m. March 29 in the FedEx Global Education Center’s Mandela Auditorium, Barcott is scheduled to sign copies of his new memoir, It Happened on the Way to War: A Marine’s Path to Peace (Bloomsbury). The lecture is sponsored by the James M. Johnston Center for Undergraduate Excellence in the College of Arts and Sciences. 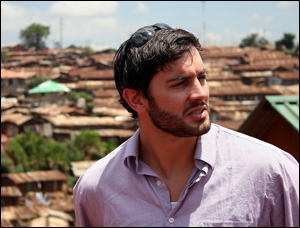 Earlier on March 29, Barcott will read from the book at 12:30 p.m. in UNC’s Bull’s Head Bookshop. It Happened on the Way to War recounts Barcott’s experiences leading troops as a U.S. Marine captain while nurturing his humanitarian organization in Africa, Carolina for Kibera (CFK), from a distance.

Meanwhile, an art exhibit at UNC helps to celebrate CFK’s 10th anniversary. The exhibit, “Living Kibera,” explores themes of work, play, home and dreams through works created by the people of the slum – Kibera, near Nairobi, Kenya. The display in the FedEx Global Education Center, at Pittsboro and McCauley streets, will run through July 15. Building hours are 8 a.m. to 9 p.m. weekdays and 8 a.m. to 4:30 p.m. Saturdays (closed University holidays). In the memoir, Barcott recounts his experiences from Kibera to the bomb-strewn streets of Fallujah and beyond. While living in a top-down military world, he illustrated through CFK the impact that small, diverse groups of committed people can have.

In 2000, as an undergraduate at Carolina, Barcott won a Burch Fellowship, an award that allots up to $6,000 for students of extraordinary ability, promise and imagination to pursue self-designed off-campus experiences that enable them to pursue a passionate interest.

Barcott went to Kibera to study ethnic violence. No one should have to live like this, he thought, experiencing a place beset by poverty with 170,000 to a million people living in one square mile, an area about the size of New York’s Central Park. The next year, he and Kenyans Tabitha Festo and Salim Mohamed launched CFK.

Since then, the organization has established an annual soccer league involving more than 5,000 youth, who play on mixed ethnicity teams and earn extra points in the standings by performing community service. CFK, a program of UNC’s Center for Global Initiatives, also built a three-story, eco-friendly medical clinic that is run in partnership with the U.S. Centers for Disease Control and Prevention. It treats more than 40,000 patients annually.

Among CFK’s honors was being named a Hero of Global Health in 2005 by Time magazine. And in 2006, Barcott was on ABC’s World News as a Person of the Week and Person of the Year.

An ROTC student at Carolina, Barcott graduated Phi Beta Kappa in 2001 with a degree in peace, war and defense. He was deployed as a Marine in Iraq, Bosnia and Africa, wrestling to make sense of two forms of service as they clashed and converged in his head and heart.

Barcott went on to earn master’s degrees in business and public administration from Harvard University, where he was awarded leadership and social entrepreneurship fellowships. In 2011, the World Economic Forum named him a Young Global Leader. Barcott lives in North Carolina with his wife and daughter and works in the sustainability office at Duke Energy.

The Hillard Gold ’39 Lecture honors alumnus Hillard Gold and is made possible by a gift from James Gold ’72 of New York and Dr. Jonathan Gold ’75 of Newtown, Pa., in honor of their late father.