Boshamer Torn Down to Make Room for Major Expansion, Renovation 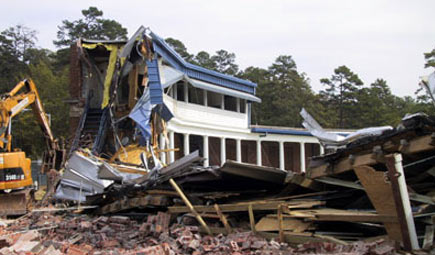 A baseball program fast on the rise saw its 35-year-old home come tumbling down this week. But in the eyes of the “diamond Heels,” that’s a good thing. The brick facade of Boshamer Stadium was demolished to open space for a $17 million remake that’s expected to be ready for the 2009 season.

The Heels, who have been to the finals of the past two College World Series, will play 2008 home games at the USA Baseball National Training Complex in Cary.

Seating capacity will be increased — to 4,000 from 2,500 — and the stadium will have a wider concourse, new concession areas and restrooms and a UNC baseball Hall of Honor. Boshamer will have new locker rooms and a weight room, larger dugouts, a new equipment room, an outdoor covered hitting and pitching facility, a padded outfield wall and a new lighting system. The new field will have a state-of-the-art irrigation and drainage system.

The stadium’s upper deck will include suites for lease, a coaches’ office suite, a fully equipped television booth, new radio booths and a press box suite and hospitality area.

The stadium will carry the name of its original donor, Cary Boshamer ’17. The field has been named the Bryson Family Field for Vaughn and Nancy Bryson, both 1960 graduates, and their children William ’89 and Catherine ’90. The courtyard entrance has been named for George Steinbrenner and his family. Steinbrenner, whose daughter, Jenny, is a 1981 graduate, brought his New York Yankees to the stadium to play exhibition games against the Tar Heels in 1977, 1979 and 1981.

The Tar Heels have played home baseball games at Boshamer since 1972.