The NCAA’s Committee on Infractions could not find any violations of its rules regarding academics in UNC’s long-running fraudulent classes case, the athletics governing body announced Friday. The University will not be sanctioned. The committee...

This fall, the University will practice something it has gotten really good at: waiting for the NCAA. UNC officials met with the athletics governing body’s Committee on Infractions Aug. 16 and 17 in Nashville, Tenn....

The NCAA’s Committee on Infractions has set an Aug. 16 hearing date for what it intends to be a resolution of UNC’s long-running fraudulent classes case. The athletics governing body has requested that both of... 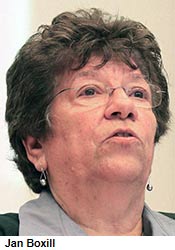 Jan Boxill, a 27-year veteran of the faculty who served a term as its chair, has resigned from the University, apparently cutting short her appeal of her firing last fall.

UNC released a statement Thursday that said: “Dr. Jan Boxill has resigned her employment at the University of North Carolina at Chapel Hill effective February 28, 2015. The University gave Dr. Boxill notice of its intent to terminate her employment on October 22, 2014 based on the Wainstein Report and its supporting documentation. Until her resignation, Dr. Boxill was in the process of appealing the University’s decision. Dr. Boxill has indicated her intent to seek retirement benefits based on her years of service as provided to state employees under North Carolina law.”

A letter from Boxill to the provost’s office on March 2 said: “I am retiring from employment with the University … and I am completing the form today for retirement” effective Feb. 28.

The reasons Boxill was fired on Oct. 22, 2014 — the day of the release of the Wainstein report documenting academic and athletic irregularities over an 18-year period — are set out in a letter, released today, to her from Provost James W. Dean.

The letter said she had:

Boxill, who came to UNC in 1988, was a senior lecturer in the philosophy department, academic counselor in the Student Athlete Development Center, former women’s basketball coach at the University of Tampa and for three years the chair of UNC’s faculty. Boxill for years worked closely with the academic issues of UNC women’s basketball players.

She was faculty chair from 2011 to 2014 and was director of the University’s Parr Center for Ethics, a position from which she was removed on the day the Wainstein report was released.

In addition to what Wainstein found, The Daily Tar Heel in November cited records it had obtained that showed that Boxill had offered 160 independent studies courses between spring 2004 and spring 2012. The newspaper repeated that assertion once in a subsequent issue, and when Executive Vice Provost Ron Strauss was asked about the report at a meeting of the Retired Faculty Association, he said it “was being looked into.”

The Wainstein report said this about Boxill:

“She had a friendly relationship with [Deborah] Crowder [’75, architect of the phony AFAM classes] and arranged for many of her women’s basketball students to enroll in AFAM courses — including paper classes — which Boxill said were used as a ‘cushion’ for student-athletes who needed additional credit hours or a grade boost. Boxill stated that she knew the paper classes were ‘self-paced’ or ‘independent’ classes, and stated that her understanding was that the paper classes met at least once.

“She knew that [Julius] Nyang’oro [former AFAM chair] was often away from campus, and she said she was not sure about his level of involvement in his classes. Boxill denied any knowledge that Crowder graded papers. However, emails reflect at least two instances in which Boxill opined on grades for her students enrolled in independent courses — once to Crowder, and once to Travis Gore [Crowder’s successor], after Crowder’s retirement.

“Boxill acknowledged that she would sometimes edit her student-athletes’ papers, and emails show instances in which she revised and added text to the students’ work. However, she viewed the edits as ‘minor’ and ‘not substantive.’ ”

On the day of the Wainstein report release, Chancellor Carol L. Folt said that UNC was  pursuing disciplinary action against nine people and that four of them were firings.

Beth Bridger, a counselor to football players in the academic support center, was fired on the day of the report’s release by UNC System President Thomas Ross ’75 (JD); Bridger had left Carolina and as of October was working in a similar role at UNC-Wilmington.

Jamie Lee, a colleague of Bridger, also was fired.

Tim McMillan ’80 (’82 MA,’89 PhD), a member of the AFAM faculty for 20 years, resigned his position on Dec. 31. Wainstein’s report and accompanying materials reported that McMillan knew about the scheme and helped steer students to the paper classes. UNC has not confirmed whether McMillan had been fired.

UNC has not identified others who were considered for disciplinary action following the release of the report.

Bobbi Owen, a professor of dramatic art who until recently was a senior associate dean in the College or Arts and Sciences, was removed as director of UNC’s London honors study abroad program.