Ayana Monroe began coding when she was 8. She learned about it at her elementary school in Columbia, Maryland. Her teacher, Vernecia Griffin, recognized a talent in Monroe. “Ayana had an uncanny way of drawing...

The University announced today that it had surpassed the $4.25 billion goal for its campuswide fundraising drive months before the campaign was scheduled to end.

The Campaign for Carolina, launched in October 2017 and scheduled to close this December, received funding from the State of North Carolina and donations from individuals and institutions. Carolina is the eighth public university in the U.S. — and the only one in the South — to surpass $4 billion in a single campaign. The other universities to reach that milestone are UC-San Francisco, UC-Berkeley, Washington, Michigan, UCLA, Texas A&M and Minnesota. 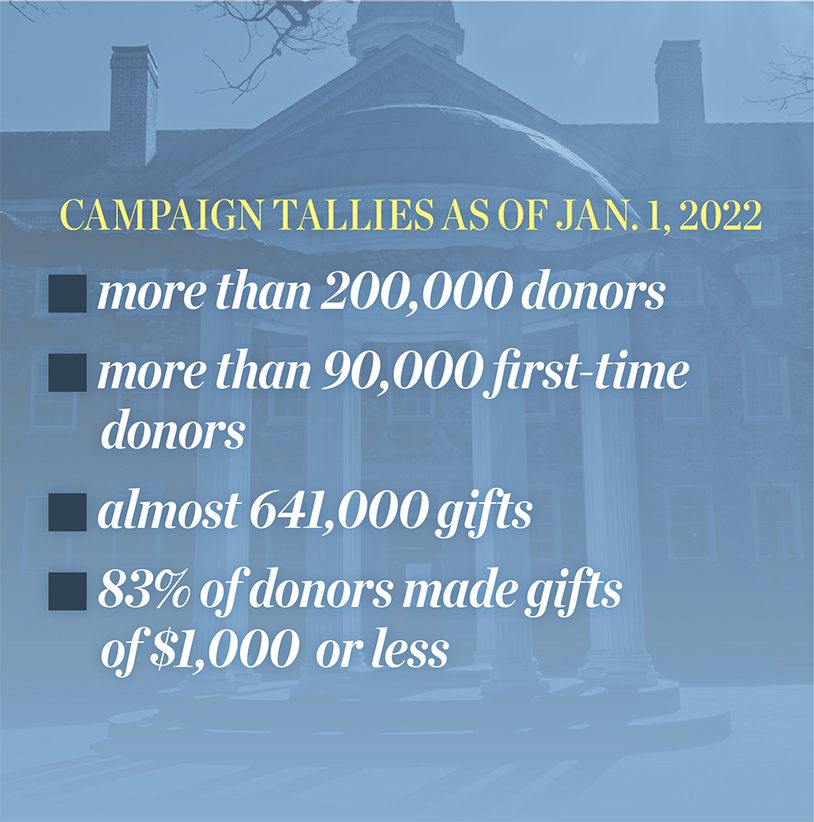 While the Campaign for Carolina met its overall goal, Chancellor Kevin M. Guskiewicz said the University will continue to work during the final months of the campaign to reach a $1 billion goal for student support. As of Jan. 1, the University had raised more than $810 million in the effort, which includes scholarship and fellowship support for graduate and professional students as well as undergraduate students.

“A lot has changed since the campaign began, but our commitment to student access and affordability has not,” Guskiewicz said. “We are committed to raising $1 billion to support our students — they represent the heart of our mission and the hope for our future. Additionally, we are committed to making sure every school and unit achieves their individual goals to support the important work they do.”

“The broad support of this campaign shows how deeply people care about the mission of our University,” Vice Chancellor for Development David S. Routh said. “We are incredibly grateful for each and every gift.”

Guskiewicz said the University is already seeing tangible effects from the campaign, such as new scholarships and fellowships, programs for students, advancements for patients and state-of-the-art buildings and facilities.

Many campaign commitments are at work supporting Carolina’s key strategic priorities, while some donors have made pledges that will pay out over time, providing a steady stream of resources. More than $1 billion in campaign commitments have been made through deferred giving vehicles such as bequests, meaning that the impact of the Campaign for Carolina will be measured over decades.

“Our donors and the people of North Carolina have invested generously in the future of this University,” Vice Chancellor for Development David S. Routh said. “Their commitment ensures that Carolina will continue to serve as a leading center of discovery, education and service to improve lives throughout our state and the world.”

The Campaign for Carolina was inspired by the Blueprint for Next, a vision document developed to guide Carolina’s growth and direction. Its two core tenets — “Of the Public, for the Public” and “Innovation Made Fundamental” — continue to guide the campaign. The strategic plan — Carolina Next: Innovations for Public Good — operationalizes the direction set by the Blueprint for Next.