Whenever Carol Folt spoke on a panel or attended a conference, she always reviewed the slate of presenters and asked, “Where are the women? Who’s not represented here?” 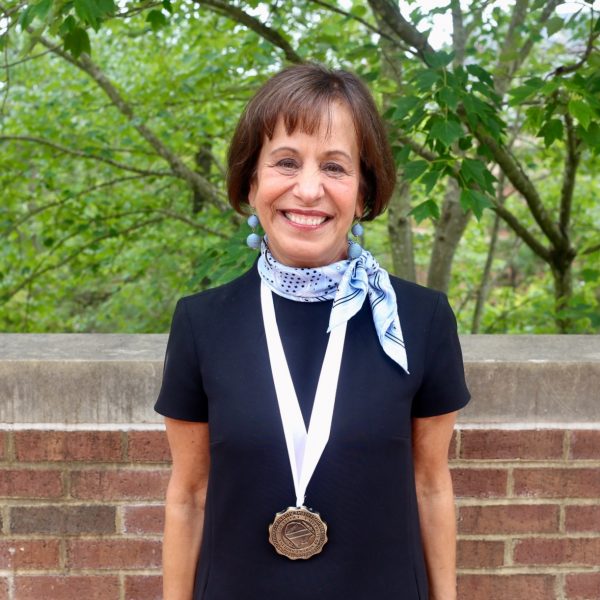 Carol made a point of bringing to the fore voices that historically had been too far away from the center of power to be heard. A persuasive fundraiser, she created opportunities for those who in the past had been relegated to the edges — such as the Carolina Edge, her signature initiative to raise $1 billion for scholarships at the undergraduate, graduate and professional school level. She secured $15 million for the Chancellor’s Science scholars program to help produce the next generation of great, diverse scientists, and greatly expanded scholarship support for those who come from military families through the Red, White and Carolina Blue Challenge and for middle-income students through the Blue Sky Scholars Program.

Carol made time — and it took a lot of time — to personally sign the diplomas of every Carolina Covenant Scholar.

Diversity and inclusion mattered to Carol. She was the first chancellor to go to the Carolina Indian Circle Powwow, though it has been held annually for 30 years. By attending every year since she was appointed chancellor in 2013, she lifted up the Native American community on campus. And she always took time to thank the “hidden figures” — the staff who worked behind the scenes to enable others to do what they do to help the University accomplish its mission.

Yet Carol didn’t get to where she is in her career by simply being likable. She has an unflagging energy that left others in the dust. She created the Blueprint for Next, a pan-university strategic framework for the coming decade, and instituted the Three Zeros environmental sustainability initiative. Her deep commitment to the arts showed in the development of the Arts Everywhere program — that giant stainless-steel spider sculpture followed her from Dartmouth — and in significant donations to the Ackland Art Museum.

Behind her warmth and enthusiasm, she pushed people to do more and to do better. Carol motivated others to go beyond their limits, all without engendering their resentment. She promoted self-advocacy. One colleague explained: “She encourages you to be bolder and think more of yourself. She’s confident in you, so you feel more confident in yourself.”

Perhaps that’s part of what drew students to her. Taking a selfie with her became one of the “Things to Do at UNC.” Her staff had to build in an extra half hour between engagements to make time for all the students who stopped her for a selfie as she walked through campus or town. She rejuvenated by getting out of the office and spending time with students. She cheered on student-athletes, showing up not only at headliner games but the less-visible Olympic sports.

Students found her approachable, and she honored their stage in life. When they made demands of the administration, even when they didn’t follow protocol or treat others with respect, she didn’t crush their spirits. She helped them understand how to navigate situations differently and more successfully.

She often said, “If I was ever having a bad day, I just needed to get out of my office and spend time with students.”

She had learned many lessons in her life, growing up in a large family in Ohio, the granddaughter of Albanian immigrants, and receiving her education at public schools, a community college and state universities. She took her role as mentor seriously.

Carol became a role model for women — students, faculty and staff — for how to balance the various responsibilities and expectations foist on women and still thrive in a career.

Carol exercised her leadership through some trying times. A scientist by training, she approached problems with an analytical mindset. She arrived at Carolina with her eyes open, just as the NCAA accusations that threatened UNC’s accreditation unfolded. She faced challenges squarely and marched toward them. She held steady at the helm through a lawsuit over Title IX violations, student protests of working conditions at factories in Bangladesh that made school spiritwear, and clashes over the Confederate monument. When three Muslim students were tragically killed, bringing unwanted international attention to UNC and N.C. State, she brought the community together to heal in a time of deep pain.

Carol could not have predicted all that has happened during her tenure at Carolina, but she knew tough situations lay ahead when she left her role as acting president of Dartmouth College to accept the UNC chancellorship, and she was prepared to take them on, just as she knows what she is getting into now as the new president of the University of Southern California.