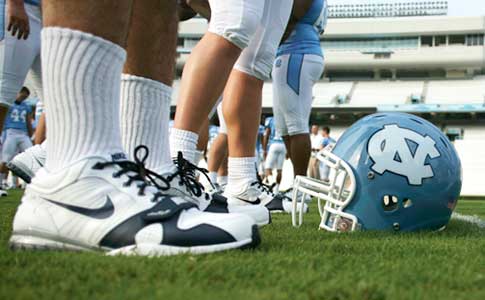 The National Collegiate Athletic Association said Monday that UNC was responsible for multiple rules violations in its football program — including academic fraud, impermissible agent benefits, ineligible participation and a failure to monitor the program.

The NCAA hit Carolina with a ban on postseason play for next season — which covers a bowl game and the ACC championship game, reduction of five football scholarships in each of the next three years, three years’ probation and a $50,000 fine. It ordered Carolina to vacate its eight wins in 2008 and eight in 2009 because ineligible players participated and ordered the school to vacate the individual records of those who played while ineligible. A former assistant coach who was not named in the report received a three-year show-cause penalty restricting any recruiting activity. Details of the report describe previously revealed activities of former Associate Head Coach John Blake, who was forced to resign shortly after the investigation began in July 2010.

The fine was self-imposed by the University, as was disassociation of the tutor and a student who served as an “agent runner.”

But the harshest penalties were more severe than UNC had proposed self-imposing. It had proposed two years of probation, loss of three scholarships for each of three years and vacating the victories. It did not propose a postseason game ban.

UNC will not appeal.

“We considered an appeal,” said Chancellor Holden Thorp ’86. “But given the timing and the record that other schools have had with appeals, as well as the fact that penalties are suspended during an appeal, we’ve decided it’s best to accept our sanctions and move forward.

“We approached this investigation the way that you would expect of Carolina — thoughtfully, thoroughly and with full cooperation — and that was the right thing to do.

“We self-imposed a number of penalties in the fall that we thought were appropriate based on the facts in our case. The NCAA has given us additional penalties, and the sanctions are more severe than we expected.”

Athletics Director Bubba Cunningham said, “The last year and a half has been difficult for everyone who loves UNC from both an academic and athletic perspective. It’s time for us to move Carolina athletics forward to help restore that reputation of integrity and respect for which the University has been known. We can’t guarantee people won’t make mistakes in the future, but we can give our collective best effort to prevent a repeat of what brought us to this day.”

The NCAA’s Division I Committee on Infractions said that over the course of three seasons, six football players competed while ineligible as a result of the violations and that multiple players received impermissible benefits totaling more than $31,000.

It said that Blake was compensated by a sports agent for the access he provided to athletes and failed to disclose the income to the University and that both he and an unnamed tutor “committed unethical conduct” and failed to cooperate with the investigation. The University has named the tutor, Jennifer Wiley ’09, in previous public documents.

“This case should serve as a cautionary tale to all institutions to vigilantly monitor the activities of those student-athletes who possess the potential to be top professional prospects,” the committee said in its report. “It should also serve to warn student-athletes that if they choose to accept benefits from agents or their associates, they risk losing their eligibility for collegiate competition.”

The NCAA credited UNC with taking decisive action after discovering the academic fraud violations and when Blake’s violations came to light. It said the school cooperated fully during the investigation.

The University waited more than four months for the NCAA ruling after meeting with its Committee on Infractions on Oct. 28 in Indianapolis. The report indicated that the delay was due to Blake’s failure to provide the NCAA with requested documents for more than three months.

According to the report, the academic fraud violations stemmed from Wiley constructing significant parts of writing assignments for three football players. She wrote paragraphs for papers, revised drafts, composed “works-cited” pages, researched and edited content and inserted citations, among other violations. Wiley also provided more than $4,000 in impermissible benefits, including airfare and paying for outstanding parking tickets, to 11 players after she graduated and was no longer a University employee.

Blake also was cited for a failure to cooperate and unethical conduct. According to the committee, not only did he refuse to provide information relevant to the investigation, but he also furnished false and misleading information. At his hearing, in a reversal of his previous refusal to provide information, Blake expressed a willingness to provide the pertinent records. However, he did not provide the documents for more than three months following the hearing, resulting in what the report called a significant delay in bringing the case to conclusion.

Blake also did not report $31,000 in athletically related outside income from a sports agency. According to the committee findings, he either was employed or compensated by the sports agent. It was found that even after returning to college athletics, Blake continued recruiting clients for the sports agency, including players he was coaching.

The committee also found the University failed to monitor its football program, in part when it allowed a former player to have regular access to current players at its athletic facilities without any scrutiny. The former player was deemed an agent runner during the NCAA investigation. In addition, the University failed to investigate information it obtained suggesting one player, who accepted the most in impermissible cash and benefits, may have violated NCAA agent rules.

The NCAA said the case also included the provision of thousands of dollars in impermissible benefits to multiple players. Seven football players accepted more than $27,500 in benefits from various individuals, some of whom triggered NCAA agent rules. These impermissible benefits included cash, flights, meals, lodging, athletic training, jewelry and admission to clubs, among others. While the value of the benefits the players accepted varied, one player received more than $13,500 in cash and gifts.

UNC withheld 13 football players from its first game of the 2010 season, four of whom never played for UNC again. Two days after the first game, administrators requested and received Blake’s resignation.

In July 2010, the University discovered information that suggested Wiley had provided impermissible help in the form of free tutoring services to several players. UNC says it told Wiley that she should not tutor or provide benefits of any type to any athlete. Wiley, it said, did not follow those instructions.

That led to a widening of an investigation of Wiley’s conduct to include sports other than football. Wiley edited papers for the athletes, UNC says, correcting spelling and grammar mistakes and adding sentences.

Blake had undisclosed dealings with a sports agent, Gary Wichard. Blake failed to inform the University that, during his employment, Wichard provided him financial assistance.

UNC told the NCAA that the violations resulted from poor decisions by several athletes, Wiley and Blake and that it believed nearly all of those decisions were made despite knowledge that they violated NCAA rules.

UNC said that in hindsight, it could have taken additional steps that might have discouraged some of the people involved from committing some of the extra benefit violations or led to their discovery at an earlier date.

Through the first year of the investigation, Chancellor Holden Thorp ’86 and then-Athletics Director Dick Baddour ’66 expressed support for then-Head Coach Butch Davis, saying he had not been involved in the violations. But in late July 2011, days before preseason practice was to start, Thorp fired Davis in what has been the most controversial episode in the public’s eyes.

Thorp said at the time, “What started as a purely athletic issue has begun to chip away at this University’s reputation. I have been deliberate in my approach to understanding this situation fully, and I have worked to be fair to everyone involved. However, I have lost confidence in our ability to come through this without harming the way people think of this institution.”

The Division I Committee on Infractions is an independent group composed of representatives across NCAA membership and the public. The members of the committee who reviewed this case include Britton Banowsky, commissioner of Conference USA and chair of the Committee on Infractions; John S. Black, attorney; Brian P. Halloran, attorney; Roscoe Howard Jr., attorney; Andrea Myers, athletics director emeritus of Indiana State University; James O’Fallon, law professor and faculty athletics representative for the University of Oregon; Gregory Sankey, associate commissioner of the Southeastern Conference; and Rodney Uphoff, law professor at the University of Missouri.