Carolina Has a Couple of Rhodes Scholars

Imagine finding out that your boyfriend has won a Rhodes Scholarship … and soon afterward, learning that you have, too. 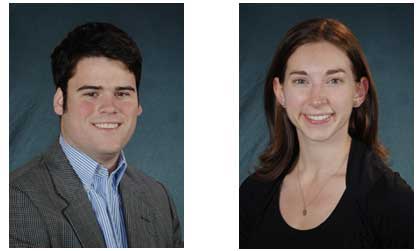 It happened to UNC senior Libby Longino. She and Henry Spelman are among 32 American college students selected most recently for the prestigious honor. They’ll enroll at Oxford next fall.

“I cried when he told me,” Longino wrote in an e-mail to the Carolina Alumni Review. “I was so happy and so excited for him. I cried even more after they announced my name, even though I promised myself I wouldn’t. What can I say? It was an emotional day, in the best possible way.”

For Longino, from Dallas, Texas — who has interned with a microcredit program in Vietnam, helped start a group combating child prostitution in Cambodia and completed an Outward Bound Wilderness Expedition in the Pacific Northwest — the selection also is an overture to enjoying her last semester at Carolina without the worry about where she’ll be next year.

“Celebration has been somewhat delayed, because you return from this momentous weekend to find that you are still a college student — and a very, very behind one at that,” she wrote. “The last couple weeks have been spent catching up on work and getting ready for final papers and exams; hopefully we’ll get the chance to celebrate over winter break.”

The scholarship funds two to four years of graduate study at Oxford, depending on the scholar’s discipline. More than 1,500 students each year seek their institution’s endorsement to seek the Rhodes; this year, 805 were endorsed by 326 colleges and universities. Selection committees in each of 16 U.S. districts then invited the strongest applicants to interview for the scholarship.

“I think winning this scholarship with Henry just makes the whole prospect of Oxford that much more exciting,” Longino wrote. “We’ve had so much fun together here at Carolina, and now we get to go on all sorts of new adventures in England.”

Longino, who graduated from the Hockaday School in Dallas in 2006, plans to pursue master’s degrees in forced migration and comparative social policy at Oxford. She envisions a career in human rights advocacy.

Spelman, who graduated from the Hill School in Pottstown, Pa., in 2006, plans to pursue a master’s degree in Greek and Latin languages and literature. His ambition is to become a professor.

Since the U.S. Rhodes program began in 1904, 45 Carolina students have received Rhodes Scholarships — the second most among all top public research universities. This year marks the sixth time that Carolina has had two Rhodes winners in the same year.

Since 2000, Carolina has produced more Rhodes Scholars than any other state-supported university and the ninth most of any public or private school. Over the past five years, UNC has tied for fifth overall in production of Rhodes Scholars, ahead of several Ivy League schools. Only Harvard, Yale, Stanford and Princeton produced more Rhodes winners than Carolina during that period.

“We are proud that Carolina is among the most successful public universities in America for producing Rhodes Scholars,” said Chancellor Holden Thorp ’86. “Libby and Henry have distinguished themselves by excelling in the classroom and by demonstrating their impressive commitment to helping others. Both are examples of the great students we have at Carolina and the world-changing opportunities they enjoy.”

Longino is double-majoring in English and public policy analysis, and Spelman is majoring in classical languages with a minor in creative writing. Both have been inducted into Phi Beta Kappa.

Both came to Carolina on the Morehead-Cain Scholarship. Since 1957, when the first Morehead Scholars graduated from UNC, the University has produced 30 Rhodes Scholars. Of those, 27 have been Morehead (now Morehead-Cain) Scholars.

Longino spent one of her Morehead-Cain summers in Vietnam, interviewing clients of a small microcredit project. She photographed their homes and businesses, documenting the new roofs, farm tools and other items their first loans had bought. One day, she heard a Vietnamese mother’s pleas for a heart treatment for her daughter.

“Her question prompted me to ask questions of my own,” Longino said. “What factors of government and development kept vital medical procedures out of this woman’s grasp? How could local, national and international bodies remedy this injustice?”

The experience resulted in an invitation later from Vietnamese colleagues to help start a foundation in Cambodia addressing child prostitution in Phnom Penh’s Vietnamese community. She traveled with them to Cambodia.

“I listened to a guide explain how the impossibility of legal status leads Vietnamese people in Cambodia to seek employment in the illicit economy and talked with locals about their decrepit housing, the absence of education and the difficulty of finding a steady source of income — all factors that make them vulnerable to the promises of brothel owners,” Longino said.

The group formed a foundation to combat those factors; Longino worked to develop a support network in Cambodia and identify donors for expanded educational facilities in the village they visited.

In Taiwan, Longino taught English and computer skills at a shelter for Vietnamese victims of human trafficking, also helping residents with their chores. In Israel and Turkey, she conducted interviews and attended conferences to research tensions that arise between religious minority groups and their governments.

As part of a fall 2008 study abroad in Switzerland, Longino traveled to Bosnia-Herzegovina to research human trafficking after the country’s civil war. Some of her findings will soon figure into her honors thesis, an examination of foreign aid effectiveness in post-conflict countries, focusing on Bosnia- Herzegovina and Cambodia.

At Carolina, Longino is president of the Carolina chapter of the Roosevelt Institute, a national student think tank. She has focused the efforts of its 150 students on policy projects for local government and nonprofit clients. This year, Carolina’s was named the most outstanding chapter among 75 chapters nationwide.

Linda Dykstra, director of the UNC Office of Distinguished Scholarships, said that Longino is admirably suited for a Rhodes Scholarship.

“Her interest in pursuing a degree in forced migration in Oxford’s Refugee Studies Centre is a perfect match for her extraordinary skill and experience,” Dykstra said. “Not only is Libby one of UNC’s most distinguished scholars, but also she has been extraordinarily effective as an advocate for social justice, whether advocating for children in South Africa, the elimination of human trafficking in Vietnam and Cambodia or the homeless within her own community.”

Last spring, Spelman received the UNC prize for the undergraduate who presents the best rendering into English of selected passages of Greek not previously read, as well as the prize for the undergraduate who shows the best ability to understand Latin poetry and translate selected passages at sight. He has won two merit scholarships from the classics department. He is proficient in conversation in Swahili and in conversation and reading in German.

“My studies in college have been dedicated to recovering the past through interpreting classical authors, to salvaging their insights like an archaeologist unearthing ancient structures of thought so that we might build some pieces of them into our lives,” Spelman said. “Someday I hope to write translations that will enable classical authors to speak with immediacy to general readers.”

Working to help Burundian refugees in Tanzania last summer — Spelman’s second time there with the U.N. High Commission for Refugees on a Morehead-Cain summer experience — he read himself to sleep at night with the ancient Greek poetry of Pindar — in Greek. Seemingly, he therefore lived in two different worlds.

“Yet what the Burundians wanted is what Pindar celebrated: a life that expresses the human potential for freedom, dignity and achievement,” Spelman said. “For me, scholarship, art and service are three mutually indispensable ingredients for that fully human life.”

Spelman edits the Cellar Door, UNC’s undergraduate literary magazine, and has written a poem already accepted by the internationally circulated Southern Poetry Review. He won the prize for the best poet in the junior class from UNC’s creative writing program.

With Amnesty International, Spelman has participated in national planning sessions and a steering committee, coordinated activism by about 30 high school students in the Triangle and led the UNC chapter, holding weekly sessions for students writing letters to prisoners of conscience. Spelman founded and heads a group that helps families of former refugees from Myanmar/Burma adapt to life in America.

“Henry is simply amazing,” Dykstra said. “Already, he has been recognized for his original poetry, his contributions as a classics scholar and his service to Amnesty International and the U.N. Refugee Commission. Perhaps even more impressive is the lively, good-humored and unselfish spirit that Henry brings to all of his many accomplishments.”