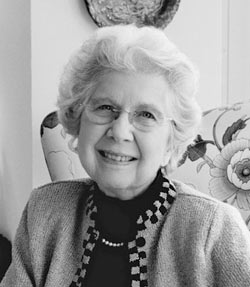 Nancy Howard Sitterson ’42 — who was UNC’s first lady, a “town treasure” and a volunteer and supporter for many local organizations — died Nov. 29 in Chapel Hill. She was 91.

Sitterson moved permanently to Chapel Hill in 1945, the wife of history professor J. Carlyle Sitterson ’31. When her husband — who also earned a master’s degree in 1932 and a doctorate in 1937 from UNC — assumed the chancellorship, she stepped into the role of first lady. Her husband’s tenure as chancellor (1966-72) was a time of social unrest and significant growth at UNC. She was one of three chancellors’ wives honored by the GAA with the

Distinguished Service Medal in 1981, cited for giving “freely of her time and talents both as a gracious hostess for the University, and for numerous other worthy endeavors of town, gown and church.”

Chapel Hill appreciated Sitterson, too. She was named a “town treasure” by the Chapel Hill Historical Society in 2008, the first year the awards were given. The awards honor outstanding senior citizens who helped shape the community’s history.

Sitterson was born in Weldon, but both she and her future husband grew up in Kinston and had known each other for several years. When she was at UNC in graduate studies in social work and he was a young faculty member, he often gave her rides to and from Kinston. Romance blossomed, and they married in 1944.

Sitterson, who described herself as “the responsible one” in her large family, supported many area causes. She was on the first public library board, helped organize Meals on Wheels and co-founded the rose garden at the Carol Woods retirement community. She was active in the Chapel of the Cross Episcopal Church and University Woman’s Club.