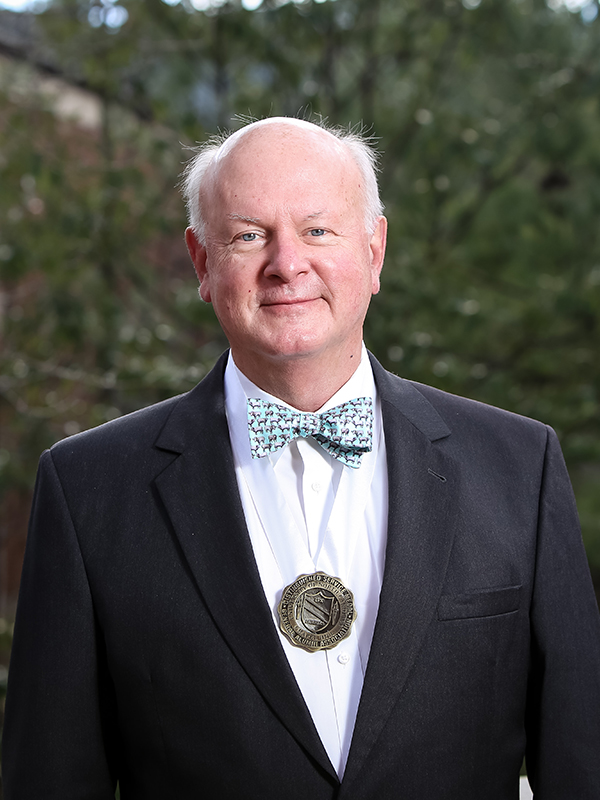 You might have expected Chuck Lovelace to put his MBA to work in a career as a venture capitalist. And he did, during his more than 35 years with the Morehead-Cain Foundation, 33 as executive director. After all, what is the foundation but a firm investing in human capital? As Chuck says, “We’re in the business of unleashing human potential.”

Chuck knows that firsthand. His life experience before he came to Carolina on a Morehead Scholarship consisted of growing up in the small North Carolina towns of Waynesville, Clyde and Plymouth. Once he got to UNC, he took up fencing and learned to fly.
He pledged Phi Delta Theta, and hung a hammock in his room. An Eagle Scout, he put his leadership skills to use as an R.A. and as student attorney general.

His Morehead class was the first that included a summer experience. The foundation sent him to work at the Kansas City Police Department, where he learned about an entirely different side of life than he saw during his next summer experience — driving cross-country with a Morehead classmate to help then-Gov. Jerry Brown run for president.

He absorbed all those lessons on how to run things. After he completed his MBA, he started along a career path in private industry, first as controller of Cabana East in Nags Head, then as CFO of Analytical Systems, the ComputerLand franchisee in the Atlanta area.
In 1984, UNC asked Chuck to pause his corporate career and become the Morehead Foundation’s treasurer. His plan was to stay four years at the institution that had shaped him as a young man, to pay back what UNC and the Morehead had done for his success. But he got hooked on the students, the great potential in every one, the opportunity to shape them, as he had been shaped, by opening new worlds to them.

The entrepreneurial spirit that served him so well in the business world worked equally well at the Morehead-Cain Foundation. As a student, he was part of the last all-male class of Moreheads. As executive director, he eased open the door to students outside of North Carolina and the covey of elite boarding schools to include international students, and scoured the selection process for unintended bias.

The foundation’s mission is to sustain and enhance the excellence of the University by attracting those who will go on in life to do great things. It does that by identifying students who have leadership potential and character, and Chuck has an unusual talent for that art.
Chuck freely mentors other schools that want to start programs similar to the Morehead. That generosity repaid itself in 2007 when he spoke with the Gordon and Mary Cain Foundation, which sought his advice on setting up a leadership program. At some point in the conversation, the Cain Foundation realized the Morehead could do it better and invested its $100 million endowment in the Morehead.

The partnership doubled what the Morehead had been able to do on its own.

Chuck never called attention to his role in securing the partnership. His name is not on the scholarship, yet the partnership likely wouldn’t have happened without him.

Chuck works quietly and intently with others to benefit the University. He served on the selection committees that chose Carol Folt as chancellor, two admissions directors, and the new editor of the Carolina Alumni Review. He has reached out to Morehead-Cain alumni to raise capital for the foundation to do even more to bring student leadership potential to fruition.

Gov. Roy Cooper ’79 (’82 JD), himself a Morehead-Cain Scholar, in 2020 bestowed on Chuck the Order of the Long Leaf Pine, which recognizes people who have made significant contributions to the state and their communities through exemplary service and exceptional accomplishments. At that ceremony, Morehead alumni expressed deep appreciation for the lasting impact Chuck has had on them.

Morehead-Cain blew by its $75 million goal for the Campaign for Carolina. Over Chuck’s 30-plus years with the foundation, a culture of philanthropy among the scholars has been established that did not previously exist. Of the more than 3,400 Morehead-Cain alumni, Chuck has known and worked with 2,217 undergraduates.

Colleagues call Chuck a visionary who has a restless desire to find ways to make the program better, to send more students out into the world with a greater chance of succeeding. He holds students to high standards and has to make the hard decision when they fall short. He never pulls strings to “get someone in” to the program.

As one colleague said: “That everyone wants to pat him on the back at the end of this rather than run him out of town is a testament to someone who has a real special quality.”

Chuck has retired, but his loyalty to the University has not. Those around him are scouting ways he can continue to unleash the potential of Carolina students and invest in changing the world.