Award-winning chemist Frank Leibfarth will deliver UNC’s 2021 Winter Commencement address. The ceremony is scheduled for 2 p.m. on Dec. 12 in the Dean E. Smith Center. Leibfarth joined the UNC College of Arts & Sciences’ chemistry faculty as an assistant professor in 2016 and has...

A chemistry professor who has been a faculty leader and is spearheading efforts to streamline operations at Carolina was honored Friday with the GAA’s Faculty Service Award. 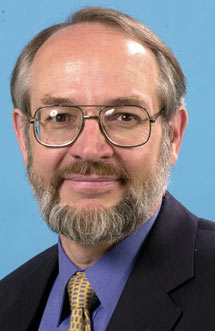 The GAA Board of Directors presented the award to Joseph L. Templeton at a dinner during its quarterly meeting. The award was established in 1990 and honors faculty members who have performed outstanding service for the University or the association. Templeton was the faculty representative on the GAA board for 2009-10.

The Iowa native joined the faculty in 1976 after earning his bachelor’s degree in chemistry at the California Institute of Technology in 1971, his doctorate from Iowa State University in 1975 and conducting postdoctoral research as a NATO fellow at the Imperial College of Science and Technology in London.

As Templeton — who served as chair of the chemistry department from 1990 to 1995 — has continued to teach a full course load, mentor graduate students, apply for grants and run his own research projects, he also has taken on several high-profile administrative assignments. Among them, he was appointed in 2009 by Chancellor Holden Thorp ’86 to lead Carolina Counts, a campuswide initiative resulting from a Bain & Co. study to make operations more efficient. The goal is to reduce overlap in administrative functions, streamline operations and simplify unnecessary bureaucracy, thereby refocusing resources on the academic mission of the University. To date, Carolina Counts has identified and implemented $50 million in permanent administrative savings.

Templeton also served as chair of the Faculty Council from 2006 to 2009, representing the faculty to administrators and the public. Among its duties, the council determines educational policies, curriculum and student standards, recommends honorary degrees and special awards and advises the chancellor.

Among other administrative assignments, Templeton has served as chair of the Summer Reading Program Book Selection Committee and on the Chancellor’s Advisory Committee and the Faculty Executive Committee. He was a member of the most recent chancellor selection committee that chose Thorp, who is a former faculty member of the chemistry department.