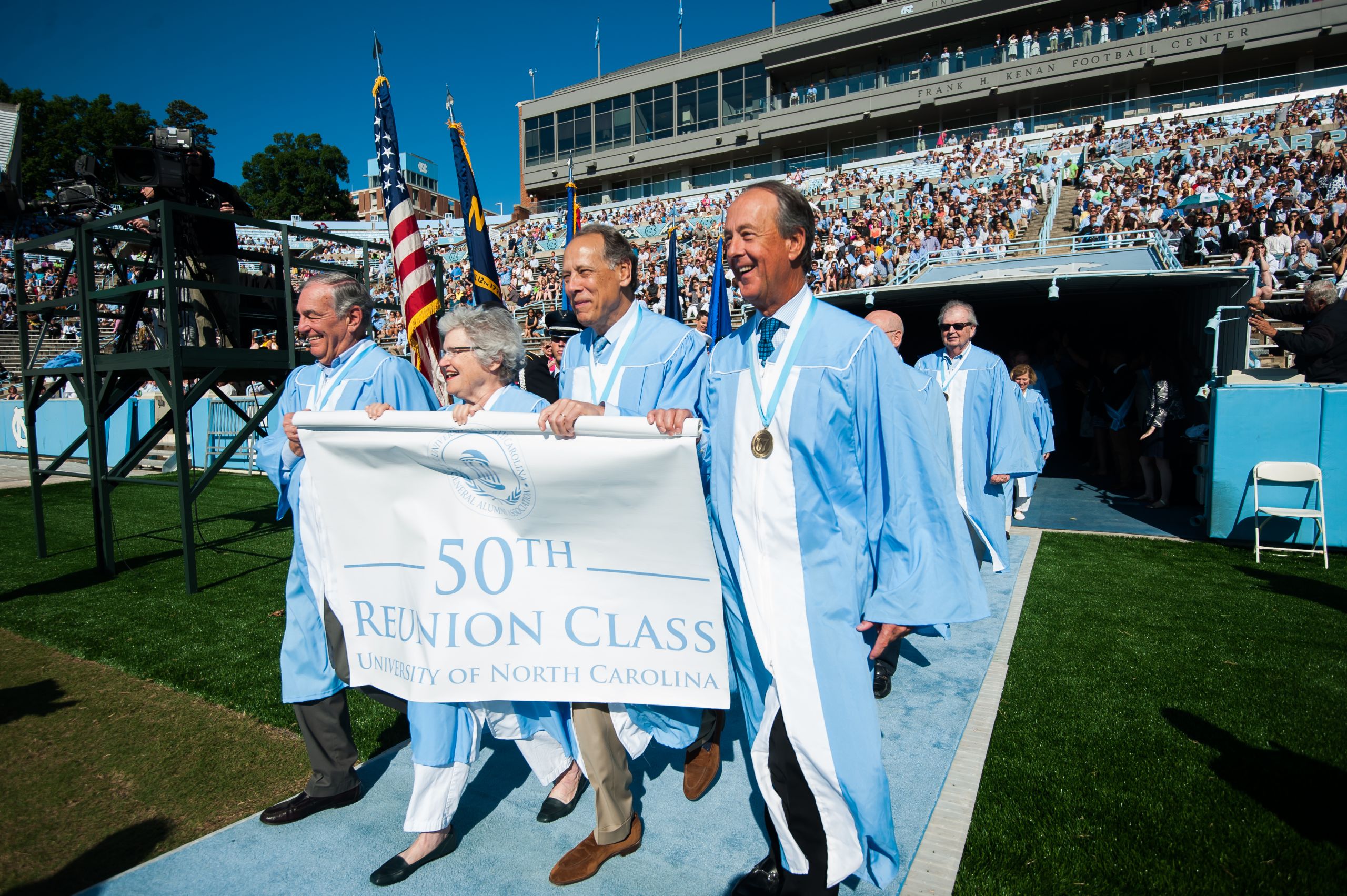 Standing in the tunnel leading from the locker rooms to the field in Kenan Stadium, Winborne Shaffer Chandler ’67 watched the 2017 graduates stream onto the field, filling in the rows of white folding chairs.

As the reunion committee chair, she held the class banner, flanked by Permanent Class President Jim Brame ’67, class Vice President Nelson Schwab III ’67 and Erskine Bowles ’67, former president of the UNC System. Behind her, attired in silky Carolina blue robes, stood scores of her classmates, waiting for their cue to process out onto the field at the start of the University’s Commencement. She felt her eyes tear up.

The Commencement emcee introduced the class of ’67, and the crowd roared its welcome. Chandler and her classmates strode or danced down the center aisle while pop hits from their senior year — Aretha Franklin’s recording of Respect, Marvin Gaye and Tammi Terrell singing Ain’t No Mountain High Enough, The Monkees’ I’m a Believer — played over the public address system.

“It was really fun,” Chandler said after striding off the field. “All the kids were high-fiving us and cheering.” 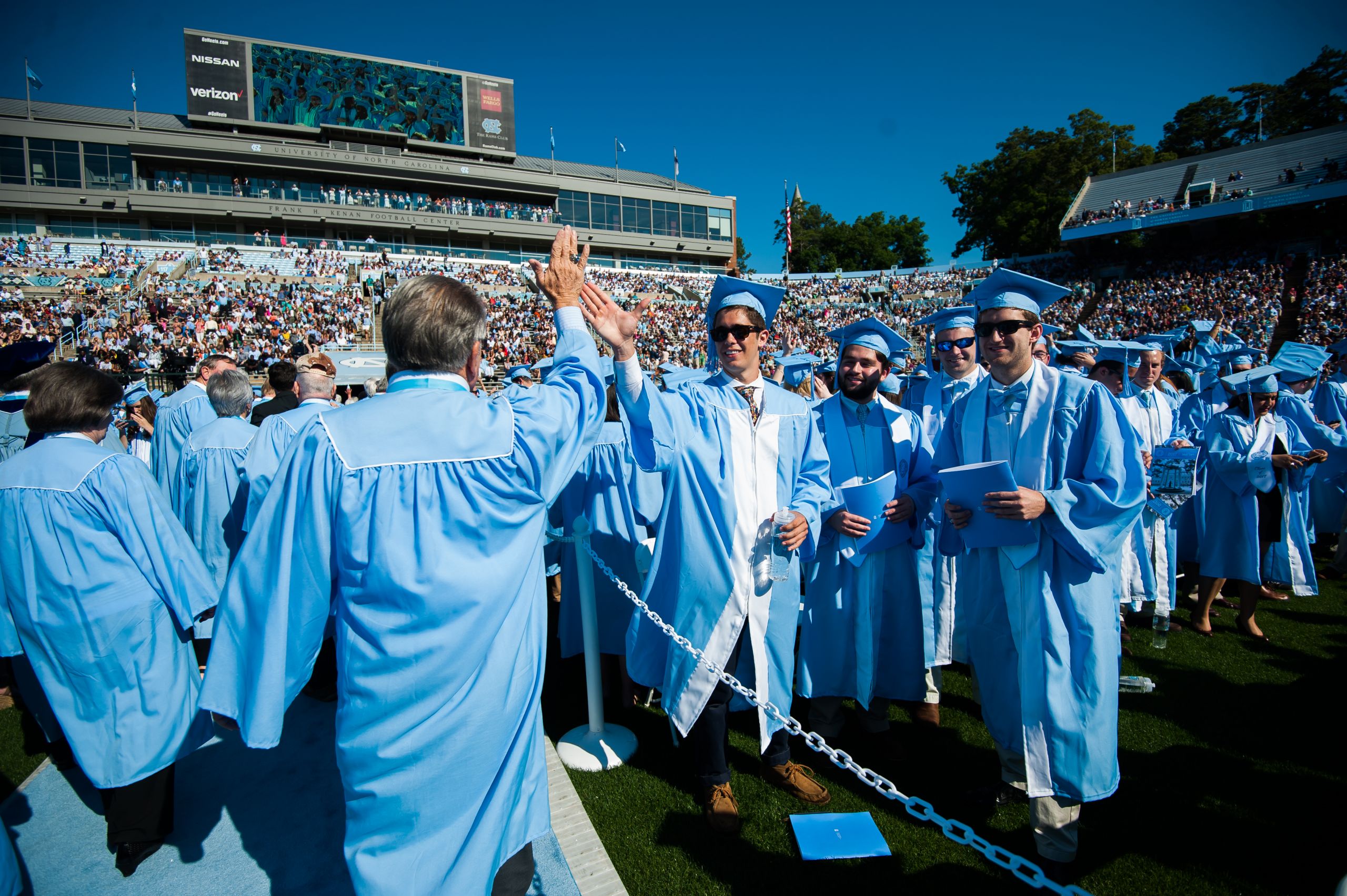 Members of the class of 2017 high-five the alumni as they march in Kenan Stadium. (Photo by Shane Snider)

The GAA organizes the alumni procession at Carolina’s Commencement each year to give class members celebrating the 50th anniversary of their own graduation a chance to relive the memory, or to make up for missing out.

Several of the alumni, returning from the field glowing, had had skipped Commencement in 1967, Steve Hockfield ’67 among them.

Rus Hapgood ’67 also sat out the ceremony a half-century ago, but enjoyed donning a Carolina blue gown in 2017. “We can make up for our mistakes from when we were young and foolish,” said Hapgood, who also earned an MBA at Carolina in 1973.

Some alumni had other obligations on the similarly warm and sunny June day 50 years ago. Joseph Woods ’67 had left already for Officer Candidate School. In 2017, he wore the camouflage cap belonging to his son, a member of the Air Force Hurricane Hunters squadron.

Tom Crawford ’67 had shipped off to Vietnam. He’s not surprised that so many of his classmates did not go to their own graduation. “The times were very unsettling,” he said, with protests against the war in Vietnam, racial segregation at home and threats to free speech fomented a general anti-establishment feeling. “It was considered uncool to go to graduation.”

Bill Davis ’67 did attend the ceremony in 1967, but couldn’t pass up the opportunity to do it again. “I thought I wouldn’t march today,” he said, “but I’m so glad I did.”

Ed Lowdermilk ’67 marched into Kenan Stadium with his friends at age 22, his parents and grandparents in the stands. “I’m glad I went,” he said. “I hope all new graduates do it.”

Fifty years ago, Hampton Tillery ’67 collected his diploma and his wife’s as well. Penny Cromartie Tillery ’67 stayed home, though she later made sure to go to her children’s Commencement. This time she was her husband’s side.

Barbara Jo Lorek Foley ’67 went to her own graduation, which she recalled was much more subdued than those in recent years that she has participated in as a faculty member at UNC’s School of Nursing. She made up her mind years ago to march at her 50th reunion as she watched other alumni processing. “It looked wonderful,” she said. And sure enough, it was. “The only people along the aisle who were solemn were the faculty.”

The rise-and-shine 8 a.m. assembly time gave some pause, especially following the reunion dinner and dancing that lingered late the night before, but for Margie Erichson Haber ’67, “it was definitely worth it.”

Class president Brame — who went on to earn an MBA from UNC in 1970 — will have his memories of the procession, but was so caught up in the moment, he forgot to take photos.

“My phone with the camera has been in my pocket all morning,” he said.